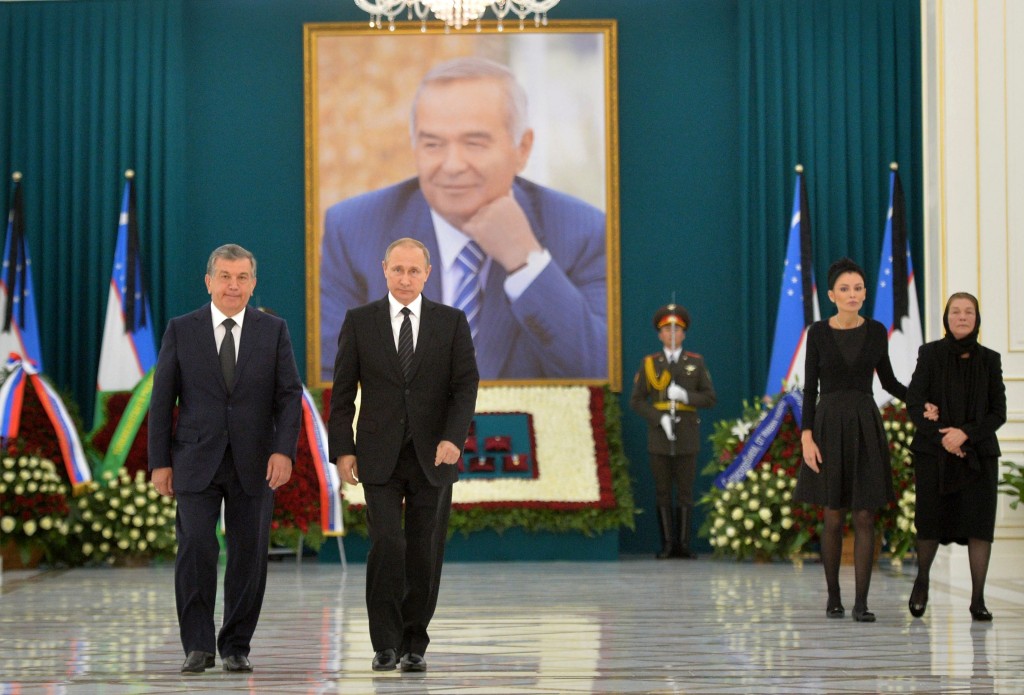 Repression is legacy of 25-year rule

In a country with no independent media, the airwaves are dominated by upbeat government propaganda. So when Uzbekistan's state media announced the former Soviet republic's first and only president was ill on Aug. 27, people in the nation of 30 million knew something was wrong.

“When the state television announced his sickness, that was kind of unusual," says Muhammad Tahir, host of the Majlis podcast and reporter for Radio Free Europe/Radio Liberty in Washington D.C.  "Central Asian media don’t usually report about the sickness of their leaders, but this time it was different, so people already started speculating. [The government] tried to keep it hidden for a few days, but it was a widely known secret.”

The death of the 78-year-old Karimov, who state media had long portrayed as the father of the nation, was announced on Sept. 1, Uzbekistan’s Independence Day. A day of official celebration turned into a day of official mourning.

After ruling Uzbekistan with an iron fist for its quarter-century as an independent nation, Karimov's death poses challenges for an authoritarian state built on a personality cult and where half the population is under 25. In particular his heir apparent, Shavkat Mirziyoyev, will confront continuing criticism over the country's human rights record, an economy heavily dependent on the production of a single crop, and the tightrope of balancing relations with Russia, China and the U.S. Karimov assumed power in 1991 as Uzbekistan gained its independence during the collapse of the Soviet Union. Although the constitution states that a president cannot serve more than two terms, Karimov served four, remaining the country’s leader until the day he died.

Under his rule, Uzbekistan experienced steady economic growth  based on commodity exports like cotton, gas and gold. But the totalitarian system that emerged from the embers of the Soviet Union led to systematic  violations of human rights and the elimination of an organized opposition. The abuses led to complications in its trading relationships.

“Uzbekistan until a few years ago would use child labor, and because of that a number of clothing producers boycotted Uzbek cotton,”  says Catherine Putz, The Diplomat magazine’s editor for Central Asia.

Strict control over the judicial system by the Karimov regime led to a multitude of arrests of citizens on arbitrary charges, denial of due process, lengthy prison terms and even torture. Repression was increased after security forces killed hundreds of unarmed protesters in 2005 in the town of Andijon. Sarah Kendzior, an American journalist and Uzbekistan researcher, describes the country's constitution as nothing more than “a sham.”

“[The] Constitution is there and it’s supposed to define Uzbekistan as a democratic country, but none of those things actually happened,” says Kendzior, in an interview with Global Journalist. “People were told they had freedom of speech, freedom of religion or that the president can only serve two terms.”

Disregard for the law has been in evidence in the accession of Mirziyoyev, 59, from his post as prime minister. The constitution specifies that the president of the country's senate is to become acting president following the death of the incumbent. However in an apparent backroom deal, the current senate president Nigmatilla Yuldoshev made way for Mirziyoyev to become acting president. His rule is expected to be ratified in elections Dec. 4 that Kendzior says will be neither free nor fair.

Support for Mirziyoyev from the media is a given. Government broadcasters control the airwaves, and foreign media like the BBC and the U.S.-backed Radio Free Europe/Radio Liberty are banned from operating in the country. Even Uzbek journalists outside the country can face challenges, says Mohammad Tahir, a Washington-based staffer for RFE/RL. He cites the arrest on “trumped up” drug possession charges of Aziz Yusupov, the brother of one of the network's Prague-based reporters.

"That is the level of repression against free media in Uzbekistan,” he says.

The personality cult around Karimov may have been mild by central Asian standards – Turkmenistan's last two presidents honored themselves by building towering golden statues of themselves in that country's capital – he was still treated as something of a deity. As the news site Eurasianet reported, in parts of the country he was referred to as "father" or "sultan" and after his death students attended special classes dedicated to Karimov's memory.

Mirziyoyev's rule appears unlikely to bring new freedoms. A recent effort to solicit feedback from the population resulted in the public shaming of one woman who dared voice criticisms, said Tahir, on the Global Journalist radio program.

However government policy may change in one key area: relations with Russia. Under Karimov, Uzbekistan kept the Kremlin at arm's length and shunned Russian efforts to reintegrate economically with ex-Soviet republics through projects like the Eurasian Economic Union. The government dismantled monuments to Soviet war heroes and even installed a museum of Russian occupation.

Mirziyoyev is likely to warm ties with the Kremlin. He's related by marriage to the Russian oligarch Alisher Usmanov, and spoke of Russia as an "allied" country just days after Karimov's funeral. Uzbekistan's state media also noted Mirziyoyev spoke with Putin by phone Oct. 7 to wish the Russian leader a happy birthday.

“Mirziyoyev is a little bit closer to Russia than Karimov, and he will probably try to build that relationship more” says Putz, of The Diplomat magazine.

with Renée Hickman and Rachel Foster-Gimbel