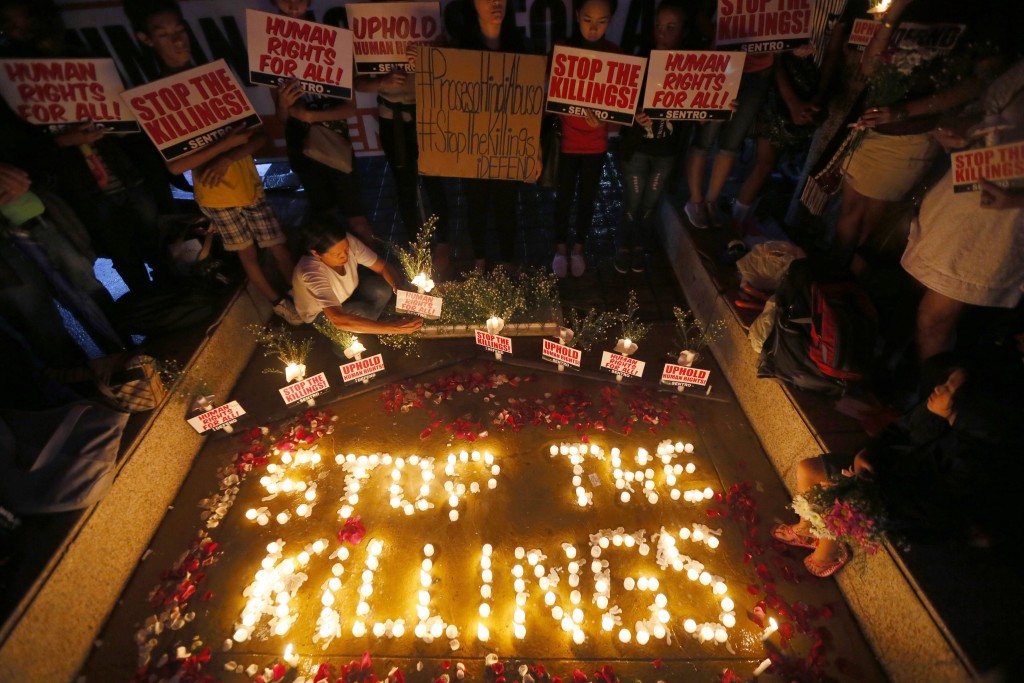 Human rights activists light candles for the victims of extra-judicial killings around the country in the wake of "War on Drugs" campaign by Philippine President Rodrigo Duterte in suburban Quezon city northeast of Manila, Philippines, Aug. 15, 2016. (AP Photo/Bullit Marquez, File)

"Most of those who've been killed so far in the drug war come from the very same social strata to whom [Duterte] appealed most... the poor."

Since taking office June 30, Duterte has unleashed a wave of police and extrajudicial killings against alleged drug dealers and drug users in the southeast Asian nation–leaving more than 3,000 dead.

He responded to his chief domestic critic, Sen. Leila de Lima, by accusing her of having an affair with her chauffeur and having her own links to the drug trade. He's cursed Pope Francis, called President Barack Obama a "son of a whore" and invited staff from Human Rights Watch to come to his home city of Davao and do drugs so he could execute them in public. That hasn't deterred Nonoy Espina, a veteran journalist and director of the National Union of Journalists of the Philippines, from speaking out about the bloodshed. Espina knows well the risks of crossing political powers in the Philippines. In 2009, he nearly went on a reporting trip with a group of reporters covering an election on the southern island of Mindanao that ended when gunmen attacked a convoy of reporters and opposition supporters, killing 58 people.

Espina spoke with Global Journalist's Tomás Orihuela about the bloodshed and the reasons for Duterte's popularity.

Global Journalist: What do you make of what's happening now in the Philippines?

Espina: The latest count shows the death tolls steadily inching towards 4,000 a little more than three months since [Duterte] assumed office. The thing is, this is what he promised during the campaign.

He did say he'd fill Manila Bay with something like 10,000 bodies to feed the fish and has been liberal about his desire to see drug pushers and addicts dead "to save future generations."

In fact, even his foreign policy direction is informed by this aversion to criticism of the war on drugs, and an apparent desire to evade accountability for the bloodshed.

While something like 84 percent approve of the war on drugs, 71 percent say it is "very important" that suspects be captured alive. It’s worth watching how the president will react to this. GJ: To what extent can we rely on the official statistics from the government on the number of dead?

Espina: The Philippines National Police constantly changes its numbers. Most recently, it has started reporting only deaths from "legitimate police operations" and discontinued giving out figures for what it calls "deaths under investigation," which include summary killings.

But as far as I recall, the latest figure they trotted out, including the "deaths under investigation," had gone beyond 3,200. And, going by experience, such official figures tend to be conservative.

I think even the police are starting to worry about the possible backlash with the rising figures. The problem, I think, is Duterte himself is prone to playing fast and loose with the numbers.

His claim of 3 to 4 million drug addicts in the country contradicts the figures from the anti-narcotics agencies that put the figures between 1.5 to 2 million. The thing is, he seems unable to distinguish between pushers and users. He has described addicts as "subhuman" and "beyond redemption" because of what he claims is brain shrinkage from drug use.

GJ: Why does Duterte remain so popular – with some polls putting him at around a 64 percent approval rating and some as high as 86 percent?

Espina: His popularity does stem from people's very real anger with traditional politics and the corruption that accompanies it, even as the vast majority remain mired in poverty. His uncouthness is seen as populism and empathy, and his vows to rid the country of crime and corruption resonate in a people tired of the same old politics.

The irony is most of those who've been killed so far in the drug war come from the very same social strata to whom he appealed most... the poor. It's a safe bet that most of them voted for him believing that he would indeed bring the change everyone sought and that they would have a chance of partaking of it.

In my own city, I know of petty thieves, hoodlums and even street dealers who openly said they voted for him. A memorial in Quezon City, Philippines, where three bodies were found in August 2016. (AP Photo/Bullit Marquez)

Espina: For one, they need to realize that the "war" approach won't work. His closest advisers seem to be total yes-men who unquestioningly echo his thinking.

In fact, last month, the chief of the national police was boasting of attending an anti-narcotics conference in Colombia where, he said, he expected to learn from their "success."

So, unless something really drastic happens, I'm afraid there's little reason to be optimistic the bloodshed will end anytime soon. Sadly, the government has yet to produce anything substantial insofar as getting the top honchos of the drug trade. Moreover, turncoats are scrambling to join his side, including many who are involved in drugs and corruption.

GJ: What do you expect the international consequences of this will be?

Espina: Much as I do wish we could wean ourselves from the U.S. soon, I doubt the U.S. will let us do that. And honestly, Duterte's obsession with bashing the U.S. is not likely to score him points with our elite and most of the middle class, who are unabashedly U.S.-centric, as well as our military leaders.

Sadly the UN has many tinpot dictators, and will likely do nothing... although the Special Rapporteur  on summary killings [Agnes Callamard] just might take him on.

There is talk of foreign investors getting iffy over the violence, I think it's baloney... business has always proven to be amoral and will go where it is most beneficial.