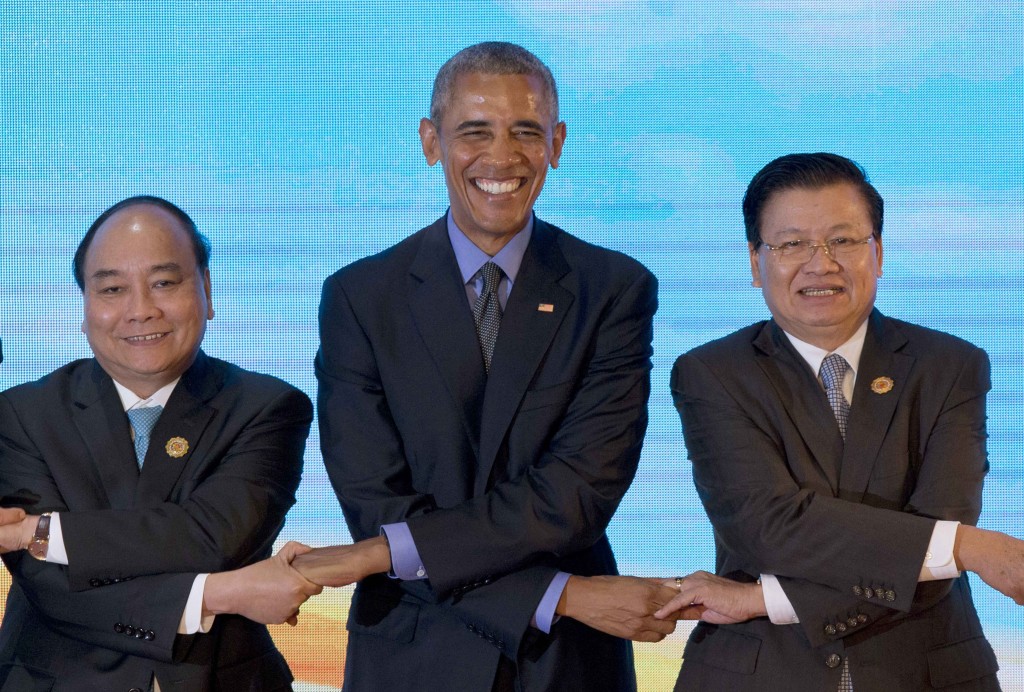 "Officials are always going to be worried that if they push countries away [they] will turn closer to China."

As President Barack Obama tried to pivot U.S. foreign policy from the Middle East to Asia and the Pacific during his first term, his administration laid out a number of pillars. Among them: promoting human rights and democracy in the region's fragile democracies and one-party states. Now, as Obama prepares to exit after eight years in office, his administration can claim progress on some fronts. The 12-nation Trans-Pacific Partnership, which awaits Senate approval, would strengthen trade ties with Japan and countries in Southeast Asia. The Paris agreement on climate change last year came about after close cooperation between the Obama administration and China. He’s forged better relations previously-isolated southeast Asian countries like Laos and Cambodia

Yet on human rights and democracy too little has been done, argues Joshua Kurlantzick, a senior fellow at the Council on Foreign Relations and author of the forthcoming book:  "A Great Place to Have a War: America in Laos and the Birth of a Military CIA."

In southeast Asia in particular, progress on this front has stalled or reversed even as Obama has warmed relations with countries like Laos, Cambodia and Malaysia. Kurlantzick spoke with Global Journalist's Eloise Speleers about the long-term risks of this failure.

Global Journalist: One part of the pivot to Asia policy was to promote democracy. What happened?

Kurlantzick: That was a stated reason [for the pivot], but I’m not sure that was a major reason. The reality is that a number of the countries that relations have gotten better with aren’t really democracies, and that really hasn’t changed the relationship.

Not every country in Southeast Asia has regressed in the last few years. Myanmar has definitely moved forward - although it has a lot of challenges - but some of the other countries in the region have definitely regressed for a lot of different reasons.

Thailand, which was a semi-democracy, is now under the rule of military junta. Malaysia has regressed and Cambodia, Laos and Vietnam haven’t really regressed but they also haven’t really moved forward politically.

There’s no one reason, but a lot of those places experimented with democracy and failed to produce a stable government, or the opposition parties in some of those countries were so harshly oppressed that they collapsed. Or there was financial economic problems which can make people sort of turn against democracy, and so on. But the United States didn’t really promote democracy in those countries.

GJ: So is the U.S. undermining democracy in some of these countries? Kurlantzick: It’s a little unfair to say the United States is the main reason why democracy has failed in places like Thailand or Cambodia or Malayasia.

Democracy is failing in these places for a lot of reasons but [the issue is] the United States, and some other countries like Japan and EU, have continued to have pretty good relations with a lot of these countries despite increased repression.

Malaysia is a good example...the U.S. has maintained strong strategic ties despite the opposition leader being jailed on very questionable charges, and [increasing] repression of journalists and civil rights activists...Obama could have highlighted that much more aggressively.

He could’ve cautioned the Malaysian prime minister that the U.S. would stop its close military ties. He could’ve not made Malaysia a centerpiece of U.S. relations in that area.

There’s a chance this wouldn’t have done anything, but even so Obama did not do very much.

America is also a donor to many of the smaller, even more repressive countries like Laos, which could be pressed to reform or else not receive as much aid.

GJ: Obama was the first sitting president to visit Cambodia. What about that country?

Kurlantzick: Cambodia is a good example of a country that seemed to be moving towards a freer society. The opposition came close to winning parliamentary elections three years ago - they may have actually won. But since then Cambodian Prime Minister Hun Sen has begun trying to crush the opposition. Opposition leaders are under criminal charges, opposition members are in exile, and civil society activists have been murdered in broad daylight.

Yet, the United States - as well as France, the EU, Australia - haven’t taken a strong stance against Hun Sen’s government and so he feels free to continue with his repression.

GJ: How about Laos and Vietnam?

Laos is almost on a level of North Korea in terms of how repressive the state is. The U.S. has improved the relationship with Laos somewhat but it’s still pretty limited. I’m not sure what the Obama administration could do regarding Laos. It’s a very small country where the US has a pretty horrendous history and where most of the leaders aren’t very interested in what the U.S. has to say.

Vietnam is a different story. The U.S. and Vietnam are extremely close partners now and the Vietnamese government is increasingly reliant on U.S. military and strategic assistance. So the U.S. has a significant voice in Vietnam, but Vietnam hasn’t moved forward politically, even though it has become a much freer and richer place economically.

These interactions are always further complicated because of the proximity to China. Some U.S. officials are always going to be worried that if they push countries away these countries will turn closer to China.

GJ: In many of these countries where the U.S. has been growing its relationships, it has also built military-to-military ties. Does this help build democracy?

Kurlantzick: No, there is an argument that in countries where democracy is possible, like Myanmar, you shouldn't be engaging in military to military ties until democracy is stronger because you're going to be handing more power and influence to military officers at a time when democracy is fragile.