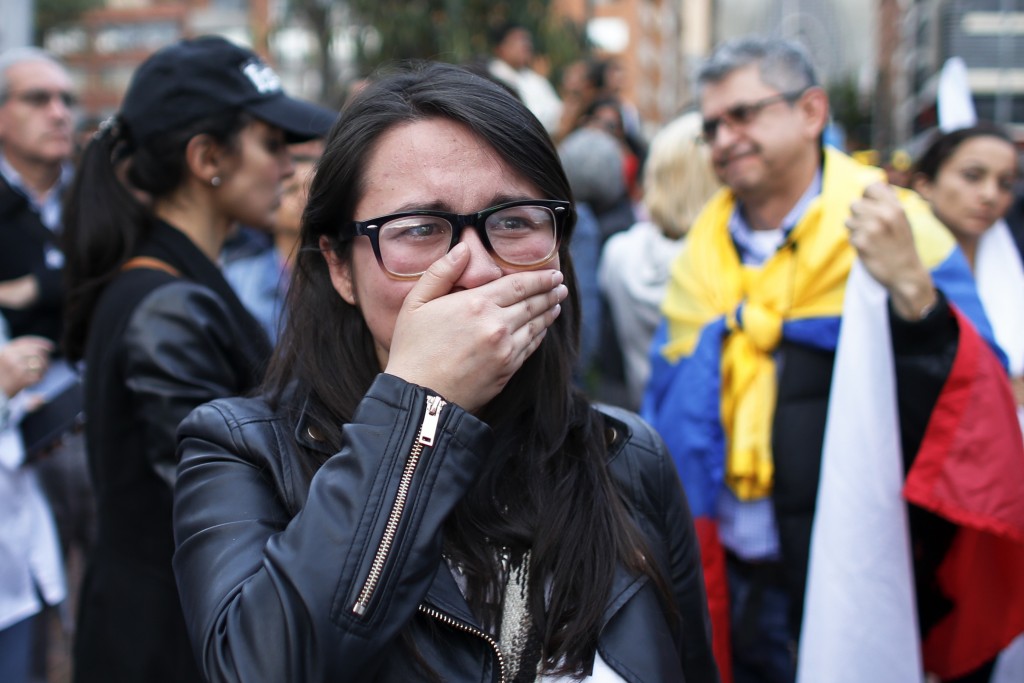 A supporter of the peace accord signed between the Colombian government and rebels of the Revolutionary Armed Forces of Colombia, FARC, cries as she follows on a giant screen the results of a referendum to decide whether or not to support the deal in Bogota, Colombia, Oct. 2, 2016. (AP Photo/Ariana Cubillos)

"I don't think Colombia is by nature a violent country and that we want to keep on killing each other."

For more than a half century Colombia's government has battled leftist rebels from the Revolutionary Armed Forces of Columbia, or FARC. But a conflict that has killed about a quarter million people and displaced 5.7 million appeared to be over after the FARC and the government reached a peace deal after four years of negotiations.

However that deal was rejected by a razor thin margin by Colombian voters in a referendum Oct. 2, raising the prospect that the FARC may return to its campaign of kidnappings, extortion and bomb attacks. Adding to the country's challenges is the complexity of the conflict, which broadened in the 1980s and 1990s to include not only the government, the FARC and other leftist guerrillas like the ELN and M-19, but drug cartels and right-wing paramilitaries.

To get a sense as to why Colombia's conflict has proven so intractable, Global Journalist's Alejandra Arredondo spoke with Mauricio Archila, a history professor at the Universidad Nacional de Colombia. Global Journalist: What is it about the war with the FARC that has made it the longest running conflict in the Western Hemisphere?

Archila: There are many factors that could explain the Colombian conflict. One of them is inequity of land distribution. Some presidents, like Carlos Lleras [1966-1970], Virgilio Barco [1986-1990] or Belisario Betancur [1982-1986] tried to implement progressive agrarian reforms in order to solve land distribution, but didn’t succeed.

There are also historic factors. During the 1980s, drug trafficking affected all segments of Colombian society and helped prolong the conflict by providing economic resources to all parties. That made the conflict much more complex because it turned into something other than a fight between an insurgent group and the state. Drug money supported not only guerrillas, but also paramilitary groups that grew during this period.

GJ: How did the paramilitary groups emerge?

Archila: Paramilitary groups as a massive phenomenon began in the 1980s. The conflict turned into a territorial one when the FARC’s expansion interfered with the territory of drug cartels and large landowners. Unlike guerrillas, paramilitary groups emerged without a central committee. In some regions they were led by landowners and by groups that were directly affected by guerrillas, like small farmers who decided to take up arms.

The state feared progress by the leftists. The anti-Communist wing of the military saw the paramilitary groups as allies in fighting guerrilla groups. Although the Unión Patriótica  [the FARC's political wing] didn’t have a presence on a national level, it did succeed at the regional level and gained control over local governments in areas controlled by drug cartels. This sparked the flame of conflict. GJ: These paramilitaries and a segment of the Colombian military launched a number of attacks on Unión Patriotica politicians throughout the 1980s and 1990s and eventually wiped it out. If the FARC does demobilize, could something similar happen again?

Archila: I don't think that...something like what happened to the Unión Patriótica will be repeated. There are clear monitoring mechanisms in the agreement backed by international parties like the United Nations.

It was also the first time in which there were members of the military at the negotiation table. I think that helped contribute to a more positive image of the FARC. There are many in the military that don’t agree with that Cold War mindset [of fighting against Communism] anymore.

Personally I don't think Colombia is by nature a violent country and that we want to keep on killing each other.

GJ: The voters have rejected the peace deal. What do you think will happen next?

Archila: We're in limbo. Fortunately, the FARC hasn't committed any major acts of new violence. However, the FARC has yet to be disarmed and they might not follow the steps that outlined in the agreement. Any provocation, any mistake, could jeopardize where we are now and a lot of us are scared of that...especially when the opposition party [the right-wing Centro Democrático] and some 'No' supporters want to stretch this situation out until the 2018 elections.