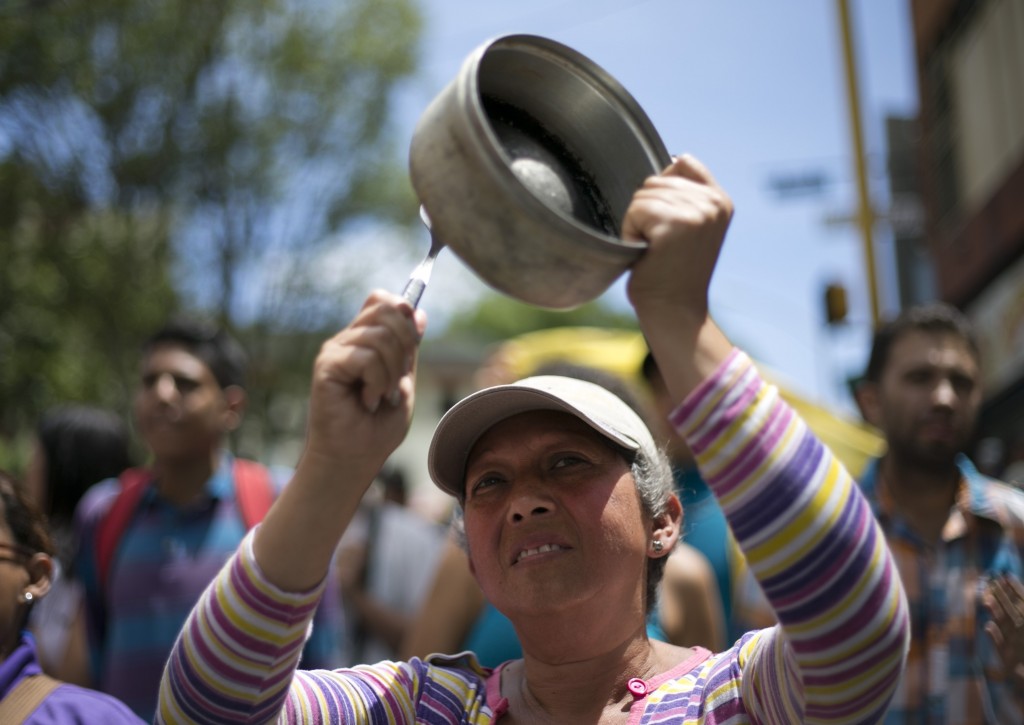 A woman bangs a pot to protest Venezuela's President Nicolas Maduro in Los Teques on the outskirts of Caracas, Venezuela, Sept. 7, 2016. Venezuelans are marching in cities across the country to demand authorities allow a recall referendum against Maduro to go forward this year. (AP Photo/Ariana Cubillos)

Tens of thousands of opposition protesters marched in the Venezuelan capital of Caracas this month demanding President Nicolás Maduro be removed from office by a recall referendum. The protests are the largest since violent demonstrations shook the country two years ago.

But if you were observing protests on Sept. 1 through the tweets of Maduro loyalist Diosdado Cabello, a member of Venezuela's parliament and its former speaker, you'd have thought tens of thousands had jammed Caracas's streets in support of the government. That's because Cabello distributed a photo of a huge crowd of people wearing red, the color of Maduro's United Socialist Party of Venezuela.

A member of the Venezuelan National Assembly posted an image on Twitter on the day of the protest showing a large number of Maduro supporters occupying the streets of Caracas.

It was soon discovered that the photo was from a 2012 protest, and news of the deception went viral. But Cabello's tweet was just one part of the Maduro government's efforts to manipulate public images of the recall effort in a country in the midst of economic crisis. Among its other tactics: banning the use of drones to take images of opposition protests, barring foreign reporters from entering the country and jailing a reporter who shared video online of Maduro being heckled in the streets.

Of course such strategies are hardly new in Venezuela, where over 370 websites are blocked, about a third of which were news sites or blogs critical of the government (the largest share were related to exchanging currency on the black market), according to the PanAm Post. Under Maduro's socialist predecessor Hugo Chávez, penalties were toughened for speech that "offended" government officials and broadcasting regulations used to suspend and harass television channels, radio stations and web sites critical of the government, as documented by Human Rights Watch and other groups.

During Maduro's tenure, the Chávez's strategy has been extended to social media. In one instance, government critic , Inés González Arraga was jailed for over a year after tweeting that a slain member of parliament from Maduro's party was "a criminal who led a squad of terror and gave kids guns."

To learn more about the Venezuelan government's efforts to control coverage of the effort to recall Maduro, Global Journalist's Tomás Orihuela spoke with Carmen Beatriz Fernández, director of the political consulting firm DataStrategia and a political science professor at Spain's Universidad de Navarra. Global Journalist: There was a large protest calling for Maduro's recall on Sept. 1. Can you give some examples of how the government tried to censor coverage?

Fernández: A few days before the protest, the government began to enforce a rule that prohibited drones in order to avoid aerial pictures of the march. Alejandro Puglia, who works with the president of the parliament [Henry Ramos Allup, of the opposition Democratic Action party], took videos from a drone, and he was arrested.

Also, the day after the protest, Maduro traveled to Margarita [a Venezuelan island in the Caribbean] in order to be surrounded by supporters in a very pro-Chávez area in [the town of] Villa Rosa. He was met by people banging kitchen pots and shouting insults. Maduro exited his car and argued with the people. This was filmed by dozens on their mobile phones and it spread nationally. The hashtag #VillaRosa ended up trending for two days.

The first media outlet to publish this was Reporte Confidencial, and its editor Braulio Jatar, was arrested hours later at his home.

GJ: In advance of the Sept. 1 protests an al-Jazeera camera crew and three other foreign journalists, including NPR's John Otis, were kicked out of Venezuela. Is this typical?

Fernández: It was surprising. The Venezuelan government has been shutting off dissident voices, but they've been doing this kind of thing in much more subtle ways. [This] is going a step further. They felt the protest was a threat to their interests, and that's why they tried to minimize the number of witnesses, even though they knew it would have a negative impact.

GJ: Diosdado Cabello, a member of the legislature, shared a fake photo of the protests showing the streets filled with government supporters . What do you make of intentional misinformation on social media?

Fernández: Cabello has a whole production team for his social and for his TV program. It wasn't just a mistake. The fact that he tweeted this photo didn't make sense because it was easy to discover the truth.

Note: Fernández's interview was conducted in Spanish and translated and condensed. With contributions from Anna Sutterer, Jonah McKeown and Federico Maccioni.

Correction: Due to an editing error, an earlier version of this story said Maduro was heckled on the streets of Caracas. The episode occurred in Villa Rosa.