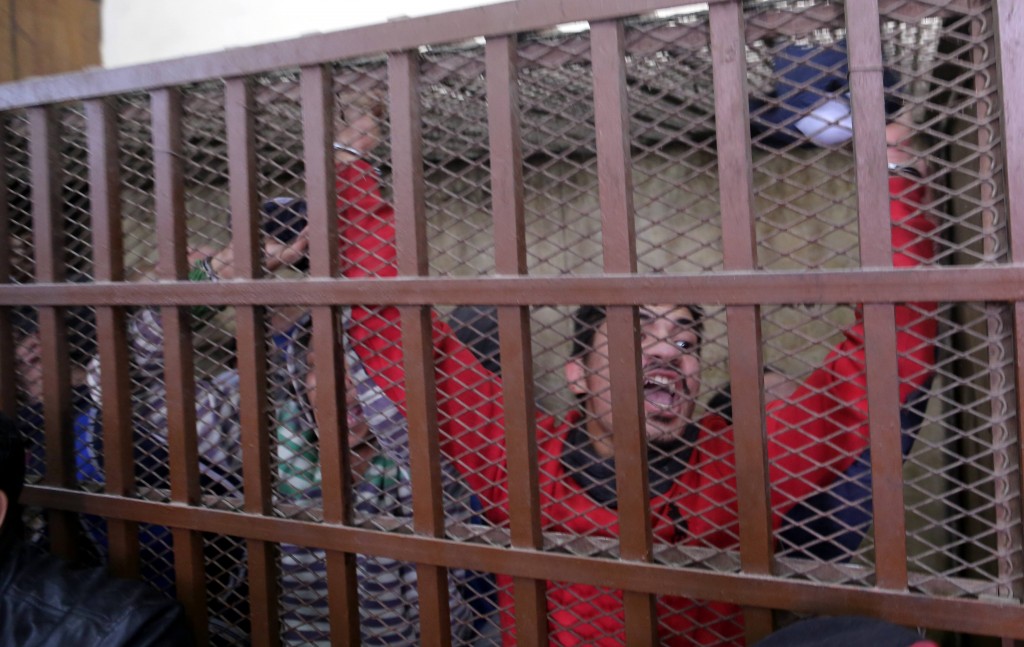 Egyptian defendants react after the court cleared 26 men who had been accused of homosexual activity, at a courthouse in Cairo, Egypt, Jan. 12, 2015. (EPA/Khaled El-Fiqi)

There is no one in Egypt that you would recognize and say, 'He is the face of the LGBT movement.'

The life of a gay man in Egypt isn't easy.

Though same-sex intercourse isn't technically illegal in the Arab world's most populous country, a broad 'debauchery' statute has been used by both the current government and that of former dictator Hosni Mubarak to prosecute those suspected of being gay.

However the relative anonymity of Twitter, Facebook and other social media outlets has provided LGBT activists a forum for advancing their cause in a country where there are few lesbian, gay, bisexual or transgender people living openly.

Among the leaders of the online community is a Cairo man who operates the Twitter handle @Egaypt. The activist, who asked that he be identified only as "Ahmed" out of concerns for his safety, spoke with Global Journalist's Rachel Foster-Gimbel about the social opprobrium and hostile legal environment for LGBT people that persists five years after the Arab Spring.

#Egypt - guy kills and burns friend because he found out he was gay...seems like unfriending him wasnt an option.https://t.co/vtWAP9xKqi

The climate Ahmed describes has been altered by a notorious police raid on a Cairo bathhouse in December 2014. Tipped off by an Egyptian TV presenter named Mona Iraqi, police dragged 26 men from the building and charged them with 'debauchery' as Iraqi filmed them.

Ultimately both the government and Iraqi faced public backlash. All 26 men were acquitted, though not before they were publicly 'outed.' Iraqi herself was charged with defamation for her sensational coverage of the raid, though in January she was acquitted of the charge.

Still, some in the LGBT community saw the raid as a reason to leave the country. Ahmed prefers to remain. "I still think there is hope in Egypt," he says. "If I didn't see hope, I wouldn't stay, but I think there is still hope."

Global Journalist: What was it like for you to grow up gay in Egypt?

Ahmed: In school I was very introverted. I didn't really want to interact with a lot of people. Then in university – it's a huge place and I kind of started to express more or myself and I found people that are similar to me, not necessarily LGBTQ people but just people that are ok with someone being gay or queer.

For others it's not the same. I was lucky enough to come from what we consider an upper class in Egypt, so it's more...open-minded.

For others, especially the middle class, the struggle is much harder. A lot of people go through psychological therapy and hormonal therapy sometimes. I was lucky enough not to go through that.

GJ: When did you come out to your parents?

Typically, when you graduate, your parents start discussing marriage with you. That’s not an option for me. A lot of people in Egypt that are LGBTQ decide to get married for social reasons, but I personally think, I’m not going to put someone else in jeopardy and suffer with me. GJ: Can you tell us why you need to remain anonymous?

Ahmed: There's a lot of threats. I was also a human rights activist before I became an LGBT activist, so that [being an LGBT activist] would put me and my organization in jeopardy.

Right now there is no one in Egypt that you would recognize and say, 'He is the face of the LGBT movement.' Maybe one day I will come out and be okay with showing my face, but not under this threat.

GJ: How did the 2011 revolution that ousted former president Mubarak affect the LGBT movement?

Ahmed: You know in these movies where the girl dies and the hero is holding the girl trying to wake her up and she wakes up again and everyone’s happy?

That’s exactly how the revolution was.

It’s was a huge boost for hope and freedom. Everyone says the revolution failed. I mean, it kind of failed in a lot of senses, but the most important thing that it has achieved is that it broke fear.

I still remember there was this graffiti in Tahrir Square [in central Cairo] that had two male cops kissing each other and someone like the artist wrote: ‘Cops Are Gay,’ or something.

And another person from the revolution who was also an artist removed that and [drew] rainbow mustaches on the police officers and wrote “homophobia is not revolutionary.”

GJ: Can you tell us about the arrests at the hamam [bathhouse] in 2014 televised by Mona Iraqi and how that affected Egypt's LGBT community?

Ahmed: The story was, she was doing an investigation about a hamam...and [supposedly] it was known that this place was gay and she knew it and she started to do this investigation and she basically outed everyone there.

Obviously, it was a violation of media ethics and a violation of their humanity...and it struck the community because they'd never seen anything that low before.

It was more of a wake-up call, like "Oh wait, we're still in Egypt. We might have been doing these kinds of parties, but we're living in denial. We're living in our own bubble in a country that is extremely homophobic. So that definitely kind of encouraged a lot of people to leave and just get out of Cairo.