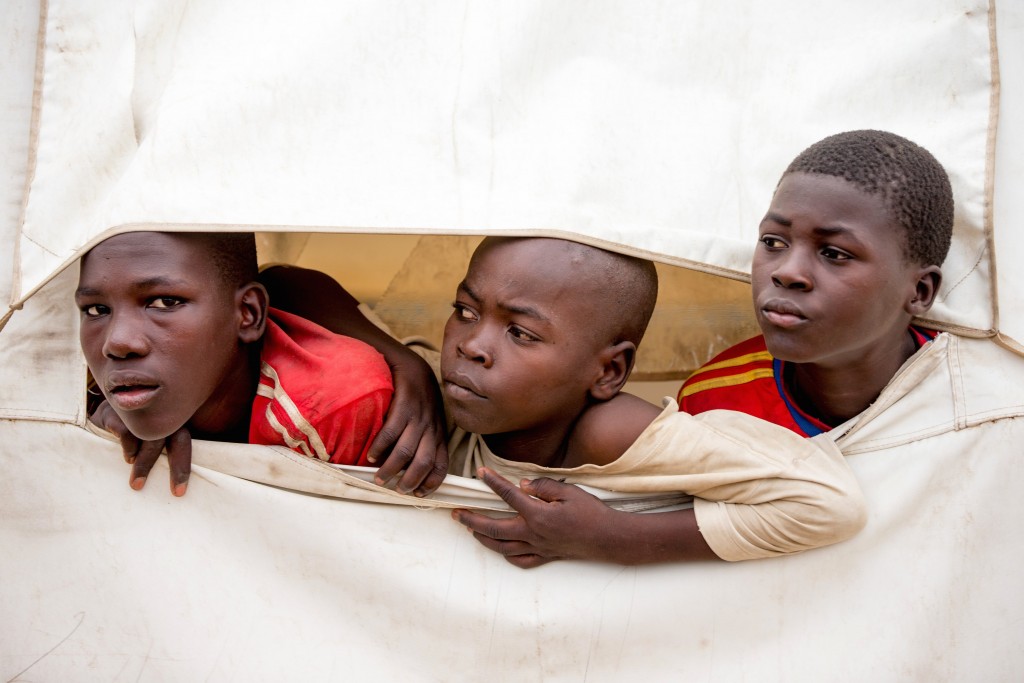 "Dozens of villages and hundreds of houses have been burned."

The Nigerian terror group Boko Haram may be best known for kidnapping 276 schoolgirls in 2014, a move that spurred the #BringBackOurGirls social media campaign. Less well known is the fact that the group's bombings, shootings and kidnappings have triggered a humanitarian crisis in northern Nigeria – one that has spilled over into neighboring Cameroon's Far North region. In total, an estimated 2.2 million people have been forced from their homes since 2014 – including tens of thousands of refugees who have fled across the border to Cameroon.

Hans de Marie Heungoup, an analyst with International Crisis Group, is among the few outsiders who have been able to get access to the remote and unstable parts of the Far North in recent months. During the four-week journey, he visited with some of the thousands of refugees living in poor conditions at a camp called Minawao as well as members of the Cameroon military, which has been conducting cross-border attacks on Boko Haram territory in Nigeria. Heungoup spoke recently with Global Journalist's Huilan Zhan about how Boko Haram recruits, how aid to refugees has fallen short and how Western countries might help defeat the terror group.

Global Journalist: Cameroon has become Boko Haram's  second-most targeted country after Nigeria, with with more than 1300 civilians killed and thousands of people abducted since 2014. How are people in the Far North Region affected?

Heungoup: The region has been much more affected by Boko Haram than what we think from the outside. Usually people just focus on the number of people killed and injured, but there is a high number of internally displaced people (IDPs) - 190,000, mostly coming from border towns with Nigeria.

In [three] districts, utilities have been ruined, dozens of villages and hundreds of houses have been burned.

The local economy has been severely impacted since Boko Haram now blocks trade routes between Nigeria and Cameroon, on which the region used to rely.

Around 65,000 refugees from neighboring Nigeria now live in the Far North, mainly in the Minawao camp of refugees. They live in a difficult situation...but they have been better treated thanks to the combined efforts by the UNHCR [U.N. refugee agency], other humanitarian agencies and the Cameroonian government. However, UNHCR said that only 10 percent of the funds needed for refugees have been provided.

GJ:  The fight against Boko Haram has been a long-term problem because it keeps renewing itself. How does the group still manage to recruit new fighters?

Heungoup: There are three key drivers of Boko Haram’s recruitment. The first one is the economic driver. The group promises to give a bonus to new members once they join, such as $100 to $500 and to pay them when they complete some operations. For some people with valuable skills and background, like nurses, the pay would accordingly grow. There is no fixed price. Besides money, sometimes the group would provide the members with a motorbike for transportation of food for the group, which could also be for the members' personal uses as a source of income.

Secondly, the group is trying to convince the members that they will rebuild the former Kanem Bornou empire of the 19th century, which included part of the current Nigeria, Cameroon and Chad. At the same time, religious radicalism becomes their tool to manage. The group will say to new members, "this is a fight for Islam, in the name of Allah."

The third driver is constraint. Thousands of young boys and girls have been recruited by Boko Haram just by force: kidnapping, drugs, then indoctrination.

GJ: What are the sources of funding for Boko Haram?

Heungoup: One important source of revenue for Boko Haram has been the millions of dollars they obtain from ransoms after kidnappings of foreigners  in Cameroon’s Far North. They are also involved in various local networks of smuggling and in economic activities such as gaining profits from transportation before they have become a violent group.

GJ: The Cameroonian government declared war on Boko Haram in 2014. What have they achieved so far?

Heungoup: In terms of military response, Cameroon has reacted quite well. Cameroon has deployed two military operations, one regular army [group] named EMERGENCE 4 and one elite corps army named ALPHA. Despite human rights abuses reports, the military has managed to deny Boko Haram’s control of Cameroon Far North and to protect the population...In 2014, Boko Haram was controlling more than 25 towns in Nigeria and with probably more than 30,000 fighters in its ranks.

But the response in terms of development for the region is still very weak. People are more and more aware among senior officials that there is a need for sustainable solutions in the Far North and that the military response is just a short-term solution. In addition, the question of the fighting against radical ideas, de-radicalization, also remain unaddressed. A Cameroon soldier, part of a group fighting Boko Haram, near the border of Nigeria in 2016. (Hans de Marie Heunegoup/ICG)

GJ: What are the current responsibilities for the Cameroonian government?

Heungoup: The first thing is the urgency to improve the humanitarian situation. As UNHCR found, the refugees have just received 10 percent of the amount needed. I think it's time to allocate the remaining amount [of assistance] from the U.N. and international donors, to help refugees and IDPs.

The second scale of the response is related to the military: helping Nigeria, Chad, and Cameroon to sustainably defeat Boko Haram. That help can be through funding and trainings and weapons for these armies but the armies of the region themselves need to improve their cooperation and coordination in the fight against Boko Haram by sharing more information and by making the [multi-country allied military] force fully operational. One thing also to do for the international donors is to accompany the military help with a strong promise from the Cameroon government to better human rights in the Far North.

The third scale of response is the development of this region. That includes building roads, health centers and schools, but also creating a context in which industries and agriculture can flourish.

with Steve Dawson and Alejandra Arredondo