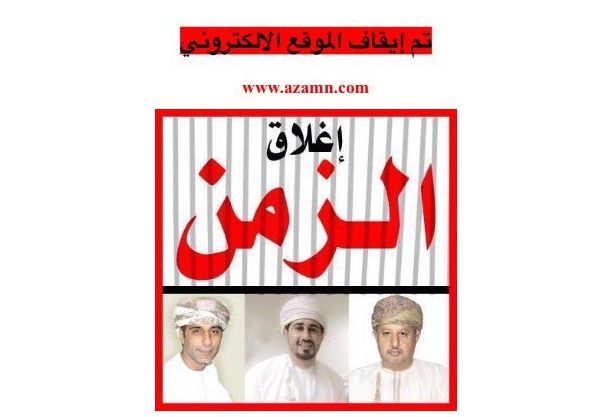 Three journalists from an opposition newspaper in Oman have been arrested in the days after the publication of a report accusing government officials of pressuring the judiciary to change a ruling in an inheritance case.

Ibrahim al-Maamari, editor-in-chief of the Azamn newspaper, was arrested July 28 after publishing an article entitled "Supreme Bodies Tie the Hands of Justice," in which he accused senior officials of pressing the chief judge of Oman's Supreme Court to overturn a decision in an inheritance case, Reporters Without Borders, a press freedom group said.

On Aug. 3, Zaher al-Abri, another editor at the newspaper, was arrested in the capital Muscat after speaking to the Committee to Protect Journalists about al-Abri's arrest. A third journalist was arrested Aug. 9, a researcher for CPJ said on Twitter, without identifying him. The newspaper's website posted photos of the three men on its homepage.

In the days after al-Maamari's arrest, Oman's Ministry of Information blocked Azamn from publishing news about his detention, al-Abri told CPJ prior to his own arrest. In response, the newspaper published a blank space on its front page.

Authorities said they would charge al-Maamari with violating Oman’s press laws as well as “undermining the prestige of the state,” the Middle East Eye, a news website, reported.

Omani authorities have targeted critical journalists and media and the media previously. Almoatasem Al-Bahlani, the editor of an online news magazine, was detained for two days in July for comments he made on Twitter, Reporters Without Borders said.

Al-Maamari was arrested and sentenced to five months in prison in September 2011, during the Arab Spring, and the newspaper Azamn was banned for a month for publishing an article that was considered as insult to justice minister and one of his deputies, according to the France-based press freedom group.