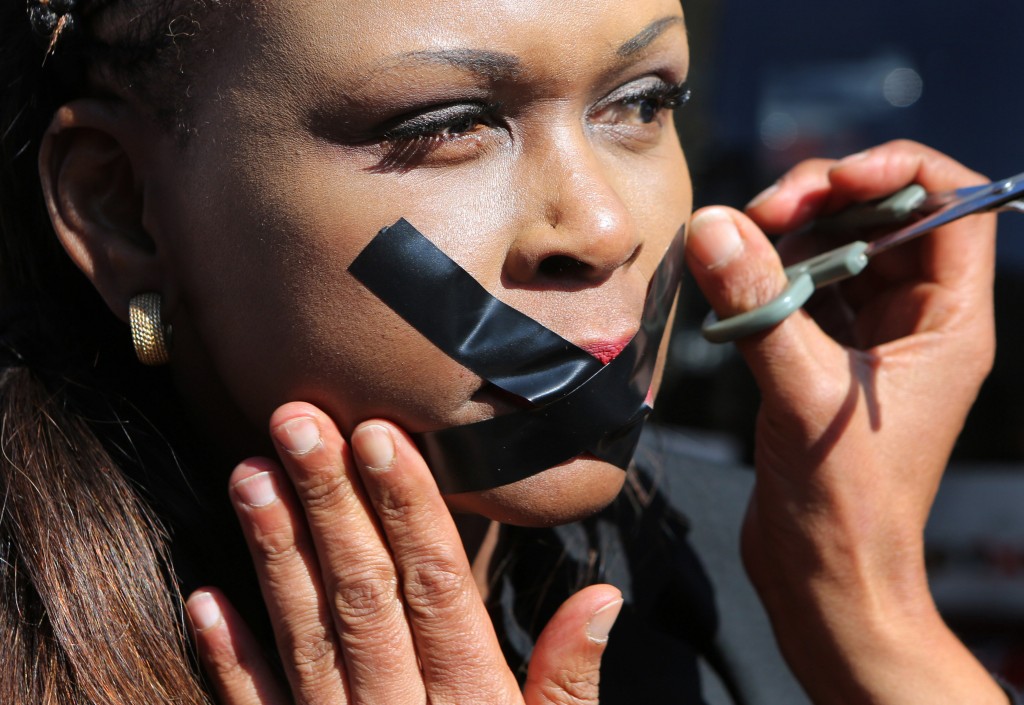 A protester has her lips taped in Johannesburg, Friday July 1, 2016, as journalists and members of the public demonstrate outside the South African Broadcasting Corporation (SABC) headquarters in solidarity with three SABC journalists who were suspended for expressing their concerns about editorial policy amid allegations of newsroom censorship. (AP Photo/Denis Farrell).

The South African Broadcasting Company has taken disciplinary action against seven journalists after an internal rebellion over a new policy barring the state-owned broadcaster from showing images of anti-government protests.

Among those reprimanded was Lukhanyo Calata, a parliamentary reporter for SABC, who led a July 1 protest at the Cape Town offices of the broadcaster, the Independent Online reported. Calata was among a group of reporters who have spoken out over an SABC policy not to cover violent anti-government protests in the country.

Lukanyo Calata of the SABC, with his son, says: "It was important for me to show solidarity with other journalists." pic.twitter.com/K95r3cd5IO

Opposition parties have criticized the decision by the state-run broadcaster, saying it is an effort to help the ruling African National Congress ahead of local elections in August. At least one ANC leader, Jackson Mthembu, the party's chief whip, has also criticized the move as "censorship," according to the Mail & Guardian.

The SABC said May 27 that it would not broadcast images of people burning or destroying public property as part of protests against the ANC-led government.

"As a responsible public institution we will not assist these individuals to push their agenda that seeks media attention," said Hlaudi Motsoeneng, the broadcaster's chief operating officer, in a statement.

Before Calata, six other journalists had been suspended in recent weeks over censorship protests.

Journalists Busisiwe Ntuli, Krivani Pillay and Jacques Steenkamp, were reprimanded for “liaising with the media without having permission from authorities” on June 30 after writing a protest letter to Motsoeneng, the website News24 reported.

Reporters Thandeka Gqubule, Foeta Krige and Suna Venter, also were suspended for disagreeing with management's decision not to cover an anti-censorship protest led by Right2Know, a media freedom group.