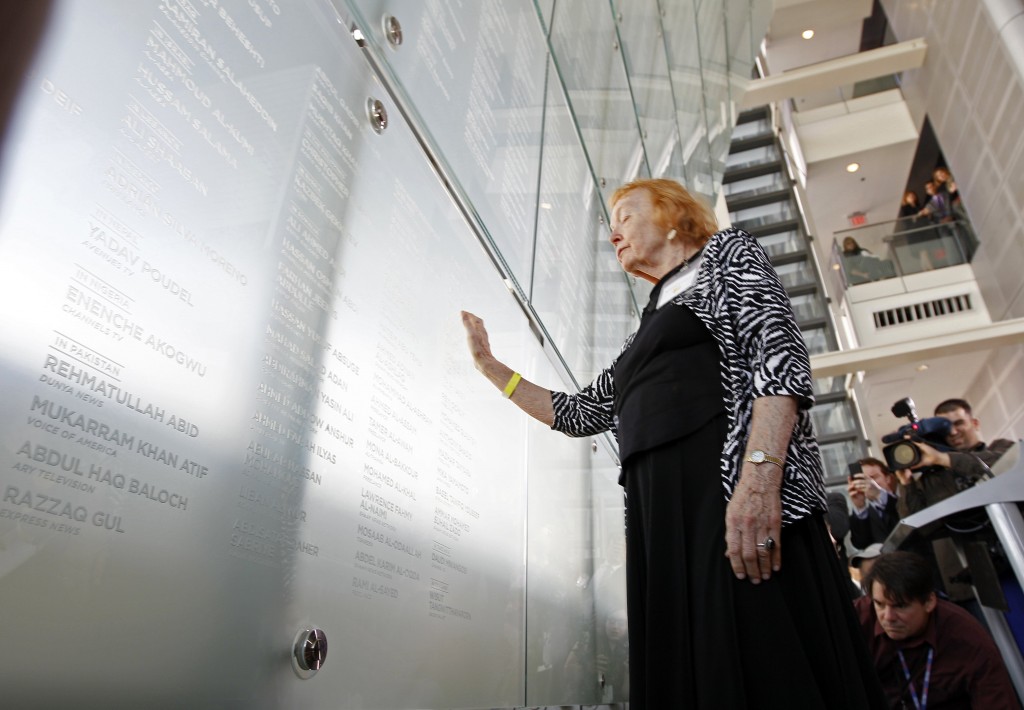 Rosemary Colvin touches the name of her daughter, journalist Marie Colvin who was killed in Syria while she was reporting from there, May 13, 2013. (AP Photo/Jose Luis Magana)

Family members of Marie Colvin, an American war reporter who was killed in Syria six years ago, have filed a wrongful death suit against President Bashar al-Assad's government in federal court in Washington, D.C.

In the complaint filed July 9, Colvin’s sister and other family members accuse Syrian authorities of deliberately killing Colvin “by launching a targeted rocket attack” against the media center where she and other reporters were working. The Syrian government attempted to “silence local and international media as part of its effort to crush political opposition,” says the suit, which was filed by the San Francisco-based Center for Justice and Accountability and attorneys from the law firm Shearman & Sterling. Colvin, a veteran war correspondent at The Sunday Times of London, and French photographer Remi Ochlik were killed on Feb. 22, 2012 at a media center in the Syrian city of Homs. It names Assad's brother Maher al-Assad, a commander of a division of Syria's army, and several other senior generals of devising a plan to spy on and kill journalists covering the war.

The suit includes what it says is a copy of a memo from Syria's National Security Bureau dated Aug. 6, 2011, instructing regional security bodies to target “those who tarnish the image of Syria in foreign media and international organizations.”

The complaint also alleges that intelligence sources tracked Colvin's movements during the fighting and informed Syria's military that she and other foreign journalists were at the media center in advance of the attack.

British photographer Paul Conroy survived the shelling inside the media center with Colvin on Feb. 22, 2012. He said that the armed forces first targeted both sides of the media center, and then directly hit the center. As soon as people were running out of the building, the shelling started to target the street.

“It was far too orchestrated, for too sophisticated, to be anything other than a deliberate attack,” Conroy later told the Washington Post.

Colvin, a veteran war correspondent who was blinded in one eye in Sri Lanka in 2001, had won a number of journalism prizes, including the Courage in Journalism award from the International Women's Media Foundation for her work covering the war in Chechnya.

According to the Committee to Protect Journalists, 96 journalists were killed in Syria since 2011.