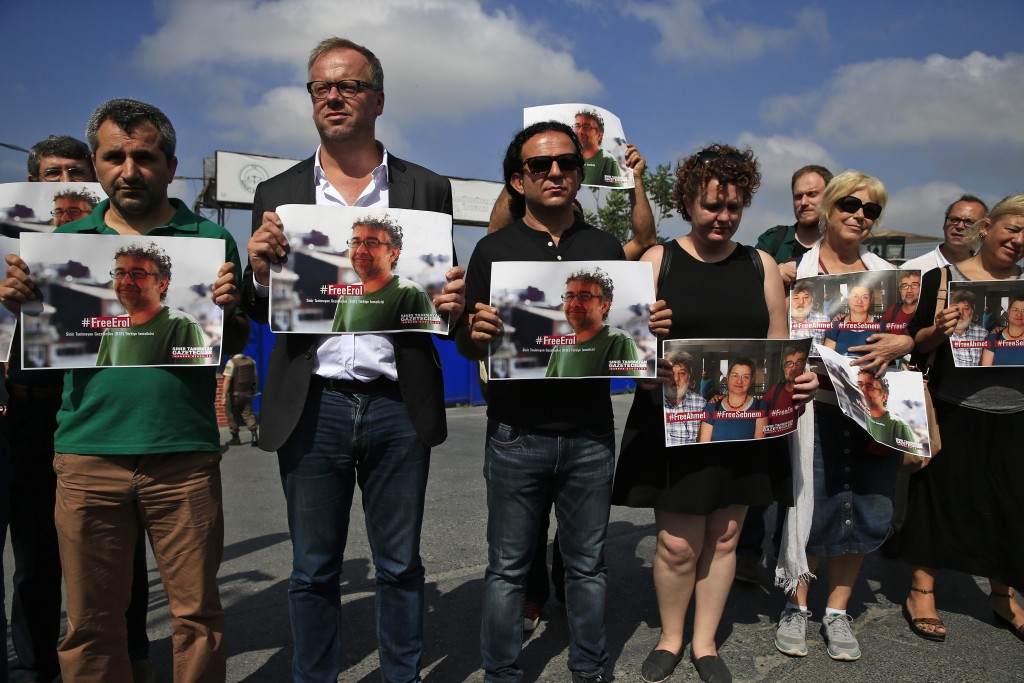 Protesters, including Reporters Without Borders' Secretary General Christophe Deloire, holding pictures of RSF local representative Erol Onderoglu, academic Sebnem Korur Fincanci and journalist Ahmet Nesin, demonstrate against their jailing, outside Metris prison where Onderoglu and Nesin are held, in Istanbul, Friday, June 24, 2016. Onderoglu, along with Nesin and Fincanci, who had participated in a solidarity campaign in support of a pro-Kurdish publication, already subject to multiple investigations and lawsuits, were placed in pretrial arrest by a Turkish court Monday over charges of disseminating "terrorist propaganda". Press freedom advocates warn that freedom of expression has dramatically declined in Turkey, where lawsuits against journalists, academics and other public figures are common.(AP Photo/Lefteris Pitarakis)

Two Turkish journalists and an academic are facing up to 14 years in a Turkish prison on charges of disseminating “terrorist propaganda” by guest-editing a pro-Kurdish newspaper.

Arrested June 20 were Sebnem Korur Fincanci, president of Turkey's Human Rights Foundation; Erol Önderoglu a journalist and the Turkey representative for Reporters Without Borders [RSF] , and journalist Ahmet Nesin. They face charges including "disseminating terrorist propaganda" and inciting crime, according to the Turkish news site Hurriyet.

The trio had guest edited the Istanbul-based Kurdish daily, Ozgur Gundem, as part of a campaign against Turkish repression of the newspaper. Turkish authorities have opened 55 legal cases against Ozgur Gundem this year, according to the Turkish Sun, a news site. The campaign to have prominent activists and journalists guest edit the newspaper began on May 3, World Press Freedom Day.

The arrests have drawn widespread criticism, with Reporters Without Borders terming the move "absurd and utterly disgraceful." The move was also condemned by U.N. Secretary General Ban Ki Mon, the European Union's high representative for foreign affairs Federica Mogherini, and Dunja Mijatović, the media freedom representative for the Organization for Security and Cooperation in Europe.

On June 24 Turkish and international human rights groups took part in a demonstration outside Istanbul’s Metris prison. They were demanding the immediate release of Önderoglu, Fincanci and Nesin, who remain placed in the pre-trial detention by an Istanbul court since June 20, 2016.

RSF condemned the arrest and started a petition for the release of the trio. Turkey is ranked 151st out of 180 countries in RSF’s 2016 World Press Freedom Index.