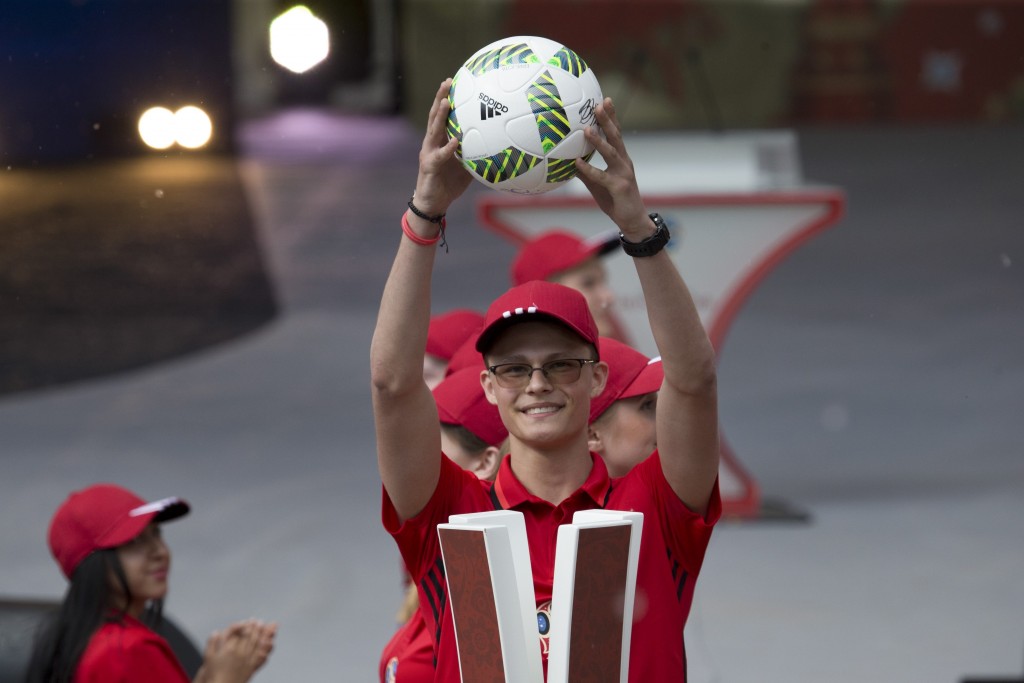 With the world’s attention set to shift to crisis-riddled Brazil for the 2016 Summer Olympics, one government in particular is likely watching how Brazil juggles the world’s spotlight amid political and economic turmoil: Russia.

Two years before the 2018 World Cup kicks off in Moscow’s Luzhniki Stadium, President Vladimir Putin’s government faces a host of potential challenges in living up to FIFA President Gianni Infantino’s recent prediction that it “will stage the best FIFA World Cup ever.”

These include international corruption investigation into the awarding of the cup and Russia’s worsening relations with Europe and the U.S. Domestically, there are allegations of corruption in construction contracts, questions about security and criticism over the expense and long-term viability of building 12 stadiums across 11 cities in a nation mired in recession.

At the top of the list is the black cloud lingering over FIFA and its decision to award the 2018 cup to Russia and the 2022 tournament to Qatar. A tally by ESPN found that 11 of the 21 living members of FIFA’s 2010 executive committee that voted to award the 2018 tournament to Russia had been suspended, banned, fined or were under investigation for various legal or ethical violations. Indeed a Swiss graft investigation into Russia's winning bid and the awarding of the 2022 World Cup to Qatar is ongoing. Meanwhile the U.S. Justice Department probe that has brought charges against dozens of people and companies connected to FIFA is far from over, and an ongoing internal investigation by FIFA itself recently led the organization to fire its deputy secretary general for financial improprieties.

Yet even if top Russian sports officials are implicated in paying bribes to FIFA officials, FIFA President Gianni Infantino is unlikely to change host countries for 2018. "[Infantino] supported the World Cup in Russia," says Rafael Saakov, a correspondent for the BBC's Russian Service in Moscow. "It's almost impossible in 2016 that somebody will risk [changing] the event because of the lack of time."

Another wild card for the 2018 World Cup is Russia's worsening relations with much of the West over its actions in Ukraine and its support for Syria's Bashar al-Assad. Last year, Ukraine's President Petro Poroshenko called for the country's allies to consider boycotting the tournament as part of sanctions against Russia over its support for rebels in Ukraine's civil war. European leaders ultimately rejected the proposal, and at the moment European support for maintaining existing sanctions may be weakening. Still, with NATO and Russia continuing to exchange angry words over issues from new NATO missiles in Romania to a Russian jet buzzing a U.S. warship to the bombing of civilians in Syria, overall relations hardly seem to be improving.

Add this to the recent investigation by the World Anti-Doping Authority that could result in Russia's track and field team being banned from the 2016 Summer Olympics, and the result is a recipe for uncertainty.

"The situation with Russia is rapidly developing and changing," says Saakov. "It's difficult to predict what will happen in 2018, how the world's attitudes will change and how the government will behave."

There are domestic risks for Russia's government as well, though its experience hosting the 2014 Winter Olympics in Sochi offered lessons. One is that a certain level of corruption will be accepted.

"There are a lot of problems with corruption, everyone understands that part of the money goes into the pockets of the officials," says Saakov. "But Russians are willing to tolerate corruption in exchange for at least some improvement and development in the country. There was a lot of discontent among the people because of the large spending on the Olympic Games, but now Russia has new roads, transport interchanges and new infrastructure was built."

Even so, the expenditure of $9.3 billion on preparations for a soccer tournament won't be popular with everyone in a country that has been mired in recession for the past year. Stadiums and other infrastructure built for major sporting events often sit empty after the closing ceremonies despite enormous price tags – witness Poland's little-used soccer stadiums built for the Euro 2012 tournament or Sochi's 31-mile road and railway project to a mountain resort built at a cost of $8.7 billion.

"A mega-event like the World Cup will be a source of pride for many people...in the short run," says Michal Karas, editor-in-chief of the website Stadium Database. "But it might become counterproductive in the long run, when taxpayers realize they footed the bill for millionaire footballers to play four games in their cities in front of foreign tourists and then locals are left paying for the infrastructure to remain largely underused."

Indeed in Rostov-on-Don near the Black Sea, Russia is building a 43,000 seat stadium for the World Cup. Yet the Russian Premier League team based in the city averaged just 13,300 in attendance last year, according to the website WorldFootball.net. Yekaterinburg, in the Urals, is getting a new 35,000 seat stadium even though its soccer team, FC Ural, averaged just 5,500.

"These are all public projects designed much beyond the actual long-term demand of Russian sports," says Karas. "Russian teams simply don't need stadiums of that scale."

Security will also prove more complicated for a World Cup sprawling across 11 cities than for the Olympics. During the games, there was a tight military cordon around Sochi, and every vehicle entering the city was thoroughly searched. Russians needed special "passports" to travel to the region, and anti-government protesters were shunted to designated "protest areas" out of sight and far from the sporting events. New World Cup stadiums like the Zenit Arena in St. Petersburg may be underutilized after the tournament. (AP Photo/Dmitri Lovetsky)

Complicating security for the 2018 World Cup is Russia's active participation in Syria's war, raising the likelihood that the Islamic State (ISIL) may target sites in Russia. Further, Russian forces are continuing to battle an insurgency in the southern Republic of Dagestan, where local Islamists have sent as many as 3,000 locals to fight with ISIL in Syria.

Nikolay Levshits, 38, a Moscow-based social and political activist, was among those barred from obtaining documents to travel to Sochi for the Olympics after he criticized state authorities in the Krasnodar region, where Sochi is located, for corruption and misuse of humanitarian aid. "I was blacklisted by the FSB [Russia's intelligence service]," he says.

And yet large-scale protests about the expense or corruption–as occurred in Brazil in the run-up to the 2014 World Cup are unlikely in Putin's Russia. Nor will a crackdown on dissent, further military provocations or widespread graft likely bother soccer's governing body.

FIFA officials "don't mind authoritarian regimes, human rights abuses," says Karas, of Stadium Database. "In strictly pragmatic terms, a ruler like Putin is a great partner for FIFA as he doesn't mind what the public says. He won't let excessive spending be challenged by other domestic authorities and what has to be delivered will indeed be delivered."