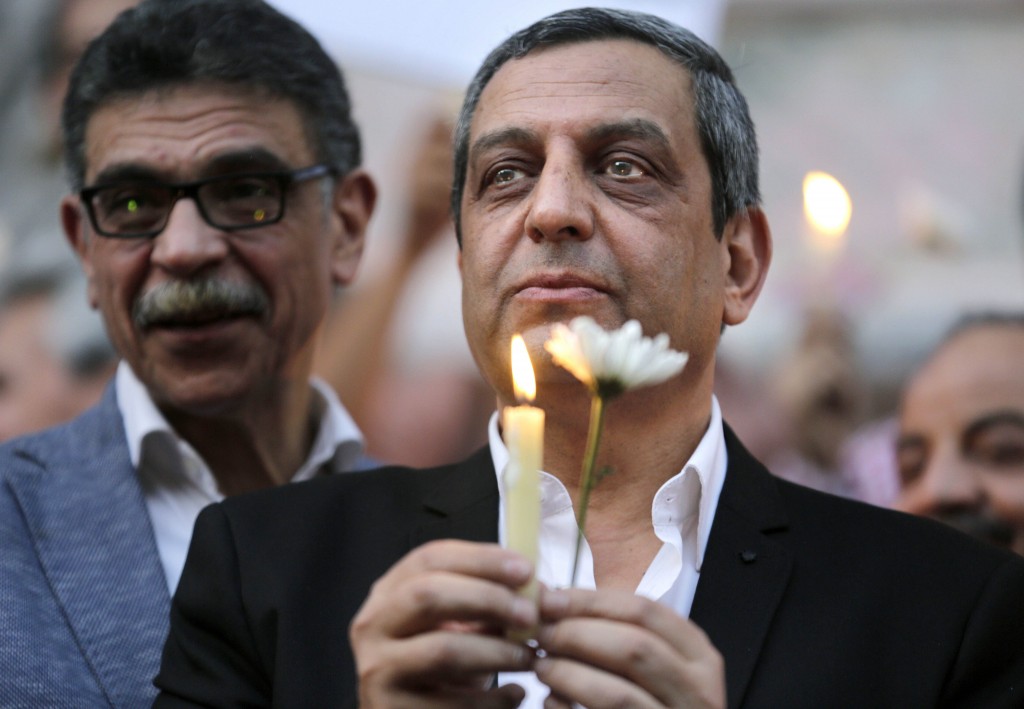 Yahia Qallash, the head of journalists' union, holds a candle during a candlelight vigil for the victims of EgyptAir flight 804 in front of the Journalists' Syndicate in Cairo, Egypt, May 24, 2016 (AP Photo/Amr Nabil)

Prosecutors in Egypt have referred three leaders of the the country's Journalists' Syndicate for trial after they were charged with harboring fugitives and publishing false news related to a police raid on the press group's headquarters.

Yahia Qallash, head of the syndicate, and board members Khaled El-Balshy and Gamal Abdel-Reheem were summoned for interrogation May 29 on charges related to the storming of the building May 1, according to media reports.

After 12 hours of questioning, the three men were charged with “harboring suspects against whom an arrest warrant has been issued” as well as “publishing false news, which threatens public peace, related to their arrest” and detained,  Amnesty International reported. They were released in the early hours of May 30 and their trial is scheduled to begin June 4, the AP reported.

At issue was a police decision to force their way into the syndicate's building May 1 to arrest journalists Amr Badr and Mahmoud El-Sakka of the opposition website Bawabet Yanayer on charges of "inciting protests" for their criticism of President Abdel Fattah Al-Sisi's decision to yield sovereignty of two Red Sea islands to Saudi Arabia.

After the raid Qallash called for the interior minister’s resignation and a presidential apology. The charges against him and the two board members stem from his critical comments after the raid and ensuing news coverage, the Committee to Protect Journalists said.

A group of 19 Egyptian human rights and media freedom organizations have condemned the arrests of Qallash and his deputies, arguing it was unconstitutional and heralded a “new level of confrontation" between the government and the journalists' union.

With 23 journalists in prison as of Dec. 1, Egypt had the second-highest number of imprisoned reporters in the world behind China, according to CPJ.