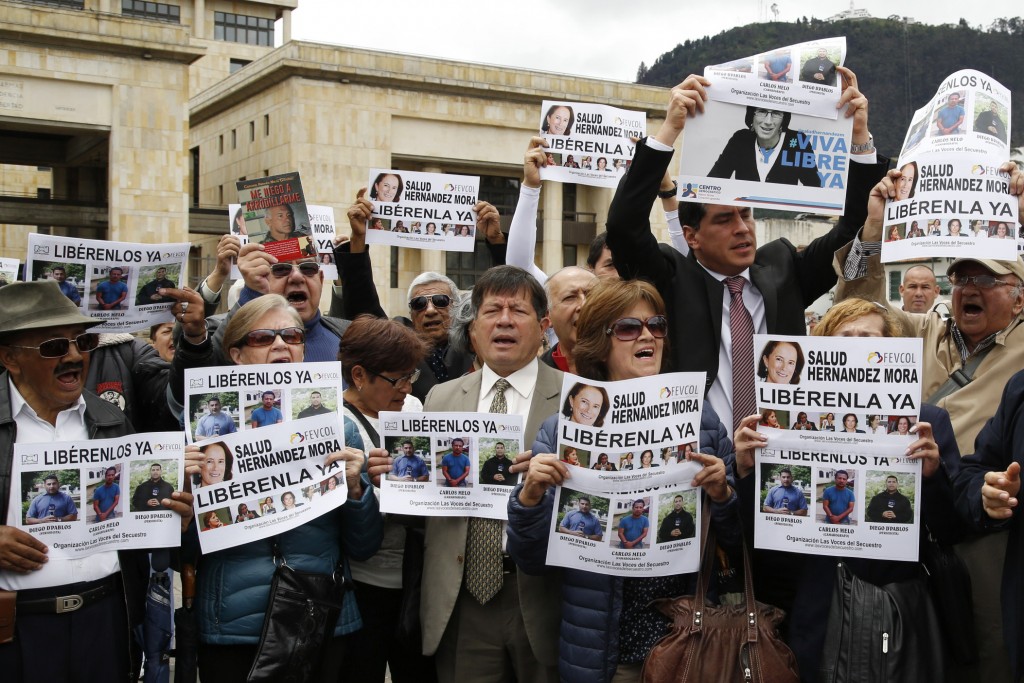 Demonstrators hold signs to demand the release of three journalists who are believe to have been taken hostage, during a sit-in in Bogota, Colombia, Wednesday, May 25, 2016. Salud Hernandez-Mora, correspondent in Colombia for Spain's El Mundo and columnist for the Bogota daily El Tiempo, as well as Diego D'Pablos and Carlos Melo, journalists at the local TV network RCN, are reported missing on the northeastern Colombia's border with Venezuela, a mountainous area dominated by leftist rebels and drug-traffickers. (AP Photo/Fernando Vergara)

Spanish journalist Salud Hernandez, from the Spanish newspaper El Mundo and Colombia’s El Tiempo, went missing May 21 while covering a story on illegal drug trade in northern Catatumbo, a region dominated by the Communist guerillas of the National Liberation Army (ELN), according to CNN.

Reporter Diego D’Pablos and cameraman Carlos Melo of local TV network RCN then vanished on May 24 in the same region while covering Hernandez’s disappearance.

The Colombian government later said that the ELN abducted all three journalists.

Hernandez was freed after being held hostage for six days. She said she was treated well. In an interview with the EFE, she said that during the captivity, she talked about politics with the ELN guards, who were angry at the government’s ignorance and said “they had taken up arms to defend the people.”

After releasing the RCN journalists, the ELN published a press release on Twitter and said that it “regret the situation that occurred in the past days with Journalist Salud Hernandez and the other reporters of RCN.” Yet it also claimed that the abductions were partly due to the journalists’ “imprudence.”

The kidnapping and subsequent release of the journalists has cast doubts over ELN's commitment to going through the peace, said President Juan Manuel Santos, according to teleSUR. The talks were expected to begin in May, but have yet to officially begin. On the other hand, peace talks with the FARC — the largest rebel group in the country — are expected to conclude by the end of 2016.

According to the Committee to Protect Journalists, at least 47 journalists have been killed in Colombia since 1992. Many of the cases are related to the conflicts between rebel groups and the central government.