Mexican reporter slain outside his home 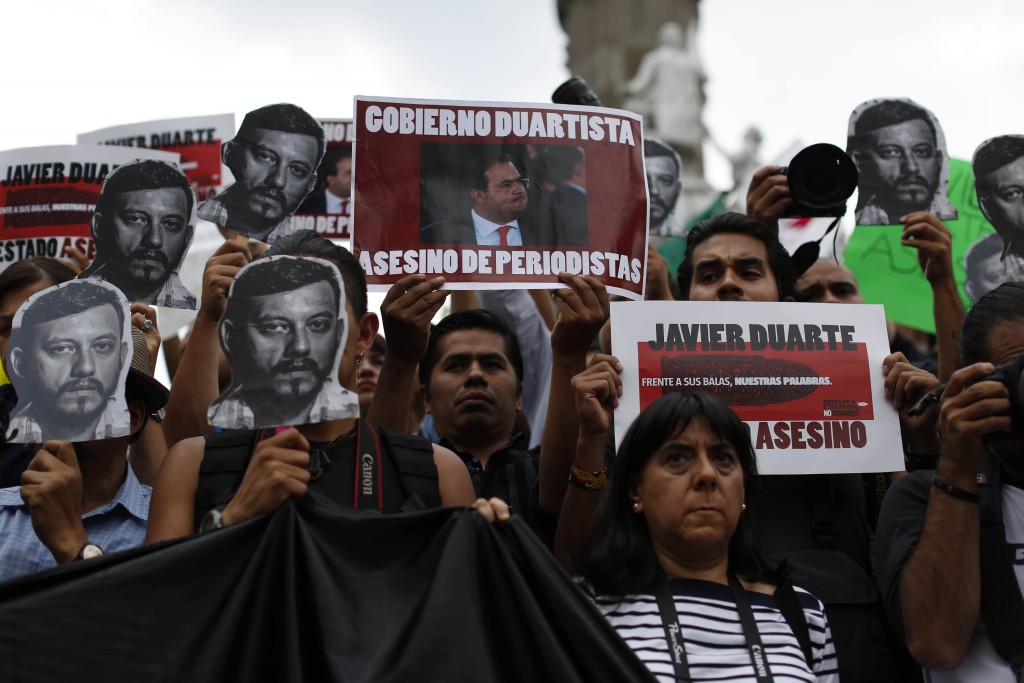 Journalists and activists hold up cut-out images of slain photojournalist Ruben Espinosa during a protest at MexicoCity's Angel of the Independence monument, Sunday, Aug. 2, 2015. Mexico City officials said Sunday they are pursuing all lines of investigation into the killing Espinosa and four other women whose bodies were found in the capital, where he had fled from the state of Veracruz because of harassment. According to the Committee to Protect Journalists, 11 journalists have been killed there since 2010, all during the administration of Gov. Javier Duarte. The signs held by the protesters read in Spanish "Duarte Government, Murderer of Journalists" and "Javier Duarte, Assassin State." (AP Photo/Dario Lopez-Mills)

A Mexican journalist was shot and killed outside his home early April 25 in Mexico's southwestern Guerrero state.

Francisco Pacheco Beltrán was returning to his home in the city of Taxco after taking his daughter to a bus terminal when he was shot around 6 a.m., the Committee to Protect Journalists said, citing family members. Another of Pacheco’s daughters told CPJ she was home with her mother at the time of the attack. They heard two sounds like firecrackers before rushing to find the body of her father near the front door of the house.

There was no sign of the killer, and that there were no witnesses to the murder. Two bullet shell casings found nearby, according to CPJ.

Pacheco, 49, was a reporter for several newspapers and a radio station in Guerrero state, and he regularly posted articles about homicides on his website. Guerrero had Mexico's second-highest rate of homicides last year, according to Reuters.

Pacheco’s work had been particularly critical of the Taxco's crime rate and the municipal government led by Mayor Omar Jalil Flores Majul, according to the Mexican news site Agencia Periodística de Investigación. However CPJ reported that his family said he had not received any threats.

Mexico ranked eighth out of 14 countries on CPJ's 2015 Impunity Index, which lists the countries where journalist's murderers are not punished. Seven journalists have been killed in the country since 2014.