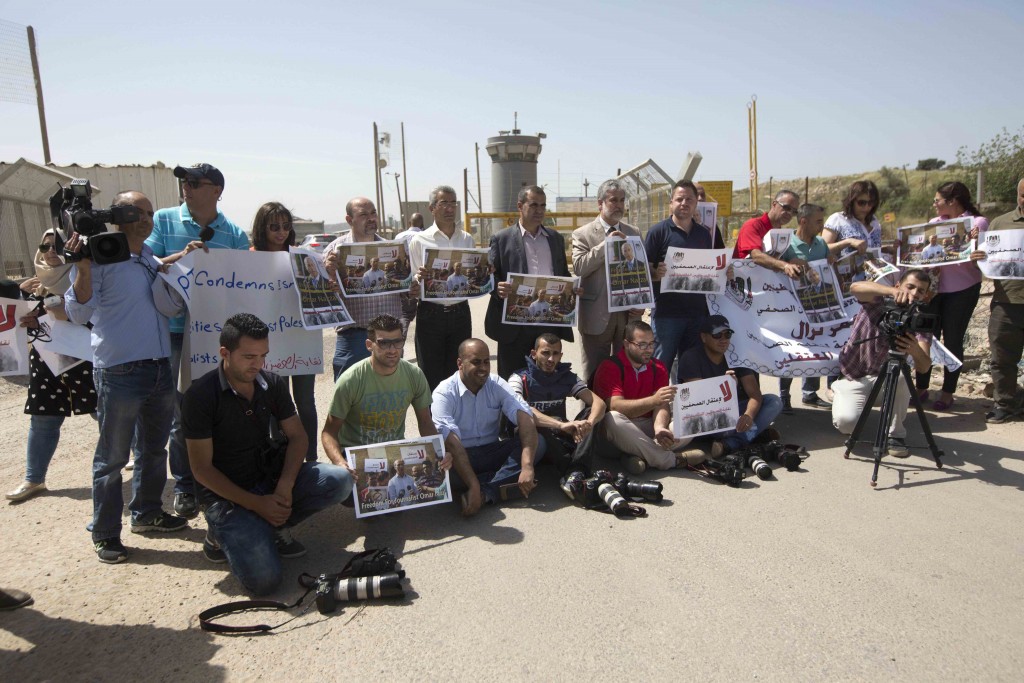 Palestinian journalists hold banners during a protest calling for the release of Palestinian journalist Omar Nazzal, who was arrested by Israeli authorities over the weekend, outside Ofer military prison near the West Bank city of Ramallah, Tuesday, April 26, 2016. (AP Photo/Majdi Mohammed)

An Israeli military court has ordered a Palestinian journalist be held without trial for up to four months on suspicion of illegal activity as part a Palestinian Liberation Organization faction.

Omar Nazzal, a member of the general secretariat of the Palestinian Journalists Syndicate, was detained by Israeli forces at a border crossing between the West Bank and Jordan on April 23 while he was en route to a meeting of the European Federation of Journalists in Bosnia-Herzegovina. The 53-year-old was ordered into "administrative detention" May 2 by Israel's Ofer Military Court, according to Addameer, a Palestinian prisoner rights organization. Under the order he can be held until Aug. 22, though his imprisonment can be renewed indefinitely.

Nazzal had been outspoken about the mistreatment of Palestinian journalists and the closure of several Palestinian media outlets by the Israeli government, according to Samidoun, a North American based network of activists working on behalf of Palestinian prisoners. He is accused of supporting the Popular Front for the Liberation of Palestine, which Israel considers a terrorist group, according to the Guardian.

In a separate case, the Israeli Central Court extended the detention sentence of Samah Dweik, a Palestinian journalist, on April 21. Samah had been detained on April 10 by Israeli troops who raided her house and confiscated her computer, according to International Midde East Media Center.

Since October 2015, 43 journalists have been detained in Palestinian territories by Israeli authorities, according to an April 16 report by Ma'an News Agency, a Palestinian news site. Of those 43, 20 journalists are either still in prison or under house arrest. In February, Palestinian journalist Mohammed al-Qeeq ended a 94-day hunger strike after Israel agreed to a deal to release him from administrative detention in May.