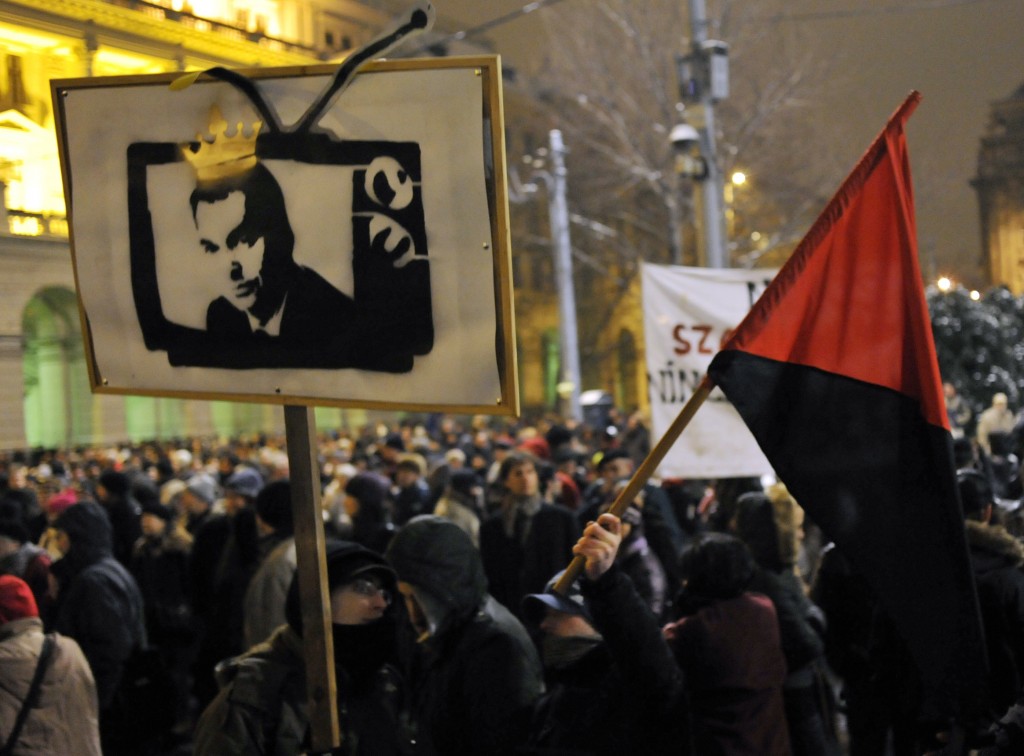 Protesters hold a banner depicting Prime Minister Viktor Orban as a king on TV during a demonstration against the government's new media law in Budapest, Jan. 27, 2011. (AP Photo/Bela Szandelszky)

In 2014, Hungarian investigative journalist András Pethő wrote an exposé about a series of expensive overseas business trips taken by the chief of staff to Prime Minister Viktor Orban for the popular website Origo.hu.

Orban's government has not viewed critical journalism of this type kindly. Under Orban's current tenure, Hungary has dropped from 25th on Reporters Without Borders' World Press Freedom Index in 2009 to 67th this year, behind Malawi, Senegal and Georgia.  As the Committee to Protect Journalists has noted, Orban's government has concentrated resources in pro-government outlets and used financial pressures and lawsuits to intimidate critical outlets. Within days of the story's publication, Origo's editor in chief, Gergo Saling, resigned – apparently due to political pressure on Origo's parent company, Magyar Telecom. Pethő and much of the rest of the site's news staff quit soon afterwards in solidarity. The walkout led to much scrutiny of Origo and Hungary's press freedom climate, both in Hungary and internationally.

But the move also left Pethő and many of the ex-Origo journalists unemployed. In response, Pethő, Saling and a number of other former Origo journalists founded a new investigative site, Direkt36. With funding from organizations including the Open Society Foundation and the Rockefeller Brothers Fund, Direkt36 has covered corruption in Budapest's municipal government, state contracts won by a company owned by Orban's son-in-law, and exposed a prostitution ring that reportedly catered to legislators and senior government officials.

Recently, Direkt36 contributed to the Panama Papers investigation coordinated by the International Consortium of Investigative Journalists and reported on the use of offshore companies by Hungarian politicians and businessmen.  Pethő spoke recently with Global Journalist's Ines Kagubare about launching an investigative start-up and the threats to press freedom in Hungary.

GJ: Does Direkt36 face political pressure in the same way that you did at Origo?

Pethő: No, not really. What we are struggling with sometimes is getting access to public records. It’s getting more and more difficult. Just recently, one of my colleagues was working on a story where she had to collect land records. She was collecting data on the area where the prime minister and his family own estates. You [should] get as many records as you want, but after awhile she was denied access. She was told that she couldn't get any more records. We consulted with our lawyers and we tried to sort this out. We don't know for sure [if it was] because of political reasons, but it's possible.

GJ: Tell us about the events that led you to resign from Origo.

Pethő: For a long time Origo was a good place to do journalism. We had a financially stable owner, we had complete freedom to report about politics and I had never experience any interference.

However, things started to change around 2013. It became quite clear that we didn’t have that much support from the company. I suspect that probably the company itself was under some sort of political pressure but I don’t really have any proof about that.

It started with a really simple and routine story about traveling expenses of some politicians in the government. I got these data sets and I found that the head of the prime minister's office had three trips where hotel [costs] were much higher than other officials' trips. I also found that these trips were kind of mysterious. There were no records of them, so I started to ask questions, but [the government] refused to answer these.

So we filed a freedom of information request, and if you don't get an answer than you take them to court. We launched a lawsuit against the prime minister's office...and they asked to postpone the first hearing of the trial. [Origo's publishing company] also wanted us not to pursue the story. So it wasn't really a surprise that my editor was forced out a couple months later after the first story appeared. Several reporters from Origo resigned including myself. That was how Direkt36 was born, so eventually something good came out of it. GJ: You've said previously that the Hungarian government doesn't directly threaten journalists but tries to influence them more indirectly. How?

Pethő: If a politician wants to put pressure on a journalist or a news organization he or she doesn’t need to do it [directly], they will find somebody else to do it for them. They can also go to the publisher of the newspaper and say "OK, if you run this story then you are not going to get advertisements." Just recently, I heard something similar from a colleague who works for another news site. He dug a up a story that was uncomfortable for a member of the government. They couldn’t publish the story because the publisher said: “If we do this then we’re not going to get [any] more state advertisers.”

GJ: What challenges do you face as an investigative journalist in Hungary? How does Direkt36 overcome them?

Pethő: We face a lot of legal challenges so we try to get good lawyers, which we do have. Practically every story that we do exposes some of kind of wrongdoing or something that would hurt somebody’s interests. And of course those people will try to do everything they can to stop what we are doing.

The best way to tackle that is to make sure that you’ve got your facts right, you are asking the right questions and you treat them fairly. So far, we haven’t been sued yet.

And of course there are less concrete challenges. There is quite a lot of fear among people who have information. They are not willing to share [it] because they are either afraid or they think that it’s not worth it, because even if the information gets published there will be no consequences. That is something that is really hard to tackle, because what can you tell them? Sometimes in Hungary, really good investigative stories hardly have direct consequences.

GJ: Where do you see the future of investigative journalism in Hungary? Is it going in the right direction?

Pethő: Yes, probably. For example, using data for journalism and for investigation is getting more and more widespread. I see that journalists are interested in learning these skills.

But when I look at the market it's a much darker picture. The space for this kind of journalism is shrinking. You have private media companies that are under pressure by the government... The business of news media is in crisis and the business model has been turned upside down, which affects Hungarian companies because they don’t have as much money as they had before. On top of that you have a political climate that is not very journalism-friendly.