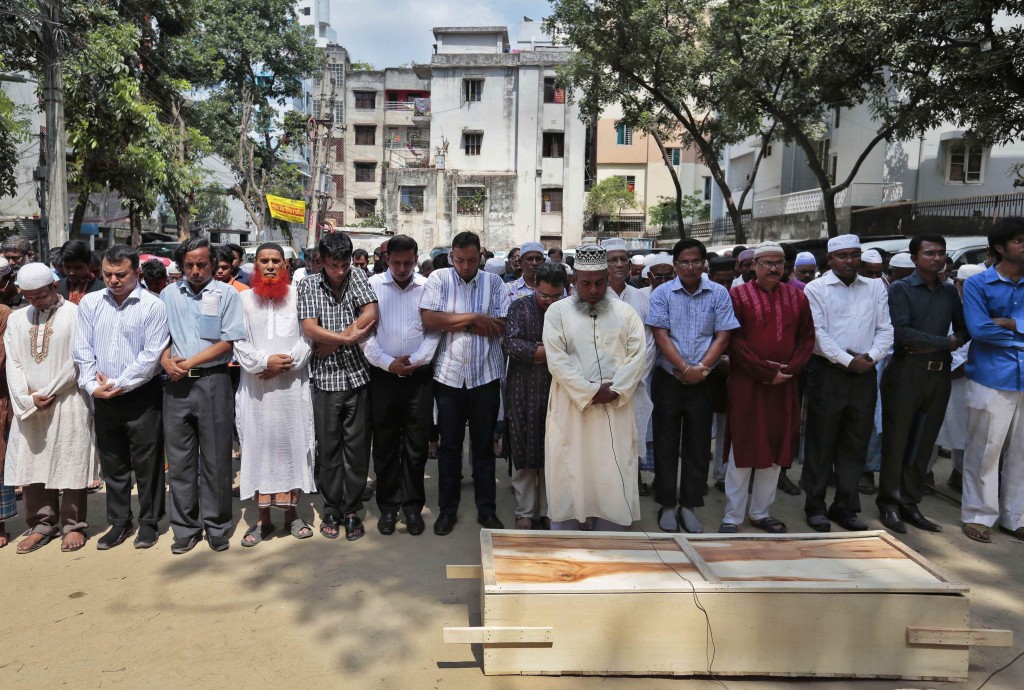 Bangladeshi Muslims attend the funeral of Xulhaz Mannan who was stabbed to death by unidentified assailants, in Dhaka, Bangladesh, Tuesday, April 26, 2016. The banned group Ansar-al Islam, the Bangladeshi branch of al-Qaida on the Indian subcontinent, has claimed responsibility for the killings of gay rights activist Mannan and his friend in the capital, Dhaka. (AP Photo)

A founder of Bangladesh's first and only gay magazine has been hacked to death in the capital Dhaka along with a friend, part of a wave of killings of liberal and secular bloggers and activists claimed by militant Islamists.

Xulhaz Mannan, a founding editor of the LGBT magazine Roopbaan, was killed in his apartment with gay rights activist Tanay Majumder after five or six men posing as couriers entered the building and attacked them April 25, the Associated Press said. Mannan is the second blogger or journalist to be killed this year in Bangladesh and the sixth to die from similar attacks since 2015. None of the assailants have been caught or identified.

Ansar al-Islam, the Bangladesh branch of al-Qaida in the Indian Subcontinent (AQIS) claimed responsibility for the killings, according to SITE Intelligence Group, an organization that tracks jihadi networks.

Two days before Mannan and his friend were killed, a university English professor was also hacked to death in northwestern Bangladesh, according to NPR. The Islamic State group claimed responsibility for the killing, and police have detained university student in that killing.

Rights groups including PEN International have criticized the South Asian nation's government for failing to protect journalists, writers and bloggers killed in recent years and advising them to censor themselves as a means of protection.

"How many more writers, editors, and free thinkers in Bangladesh will have to pay the ultimate price – their life – in exercising their right to speak freely, before the government acts?" said Salil Tripathi, chair of the group's writers in prison committee, in a statement. "Bangladesh must ensure that the investigative authorities identify the murderers and prosecute them, instead of advising writers, editors, and bloggers about what is permissible and what is not, what they can say and what they cannot – all of which only ends up rationalising the murderers who have acted with impunity."

In an address to parliament April 27, Prime Minister Sheikh Hasina defended the security situation as "normal" in the country  and said the government had taken steps to investigate the killings, according to the Bangladeshi news site BDNews24. “Intelligence activities related to movement of persons who were reportedly involved in militancy, terrorism and sabotage are under way."