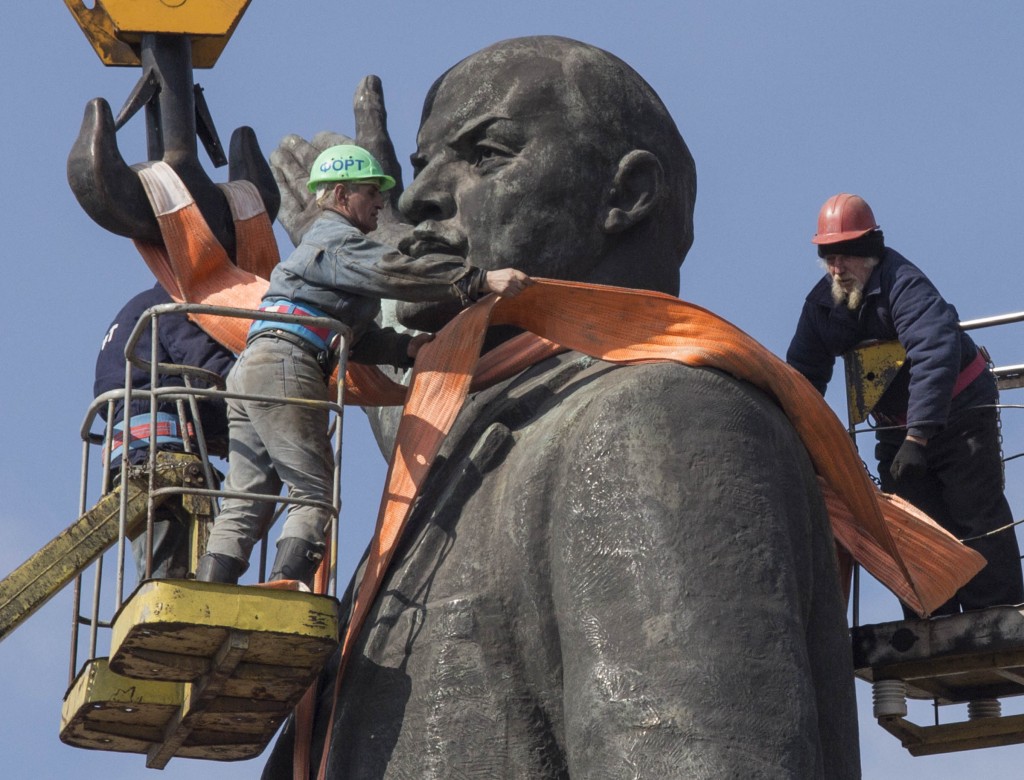 Workers dismantle the 65-foot Lenin statue standing on the bank of the Dnieper River by the Dnieper Hydroelectric Station as part of Ukraine's "decommunization," removal or changing names of all Soviet-era communist symbols, March 16, 2016. The statue was taken down the following day. (Frank Folwell)

Upon arrival in the gray, industrial city of Zaporizhia in March, rumors were swirling: Ukraine’s largest remaining statue of Vladimir Lenin was slated to fall.

At the time, the 65-foot bronze sculpture stood atop a pink granite pedestal overlooking the legendary Dnieper River at the end of Prospekt Lenina. A call to the mayor’s office in the southeastern Ukrainian city elicited a vague response: “It’s going to come down; we don’t know when.”

Then, overnight, scaffolding appeared around the base. For days, workers braved freezing winds and rain to bring down a last vestige of Communist rule in this region of Ukraine. Around 3 p.m. on March 17, fireworks exploded as Lenin was unceremoniously carted away in a flatbed truck. Hundreds of onlookers cheered, waved blue and yellow Ukrainian flags and shouted “Glory to Ukraine.”

Not everyone was ecstatic. A longing to re-establish ties to Russia runs deep in some parts of this ex-Soviet republic, including in Zaporizhia, just 120 miles (193 km) west of the front lines between Ukrainian troops and the pro-Russian rebels that control Ukraine’s Donbas region. The fall of the giant Lenin statue came nearly a year after Ukraine’s parliament banned the display of Soviet symbols, and the divisions in the city of 765,000 are a microcosm of the ideological split that has torn Ukraine apart.

Photojournalist Frank Folwell and I got an up close view of this tension when we observed “Leninfell,” as some call it, while teaching at Zaporizhia National University. We often stopped by to watch the removal process and gauge the mood of spectators. 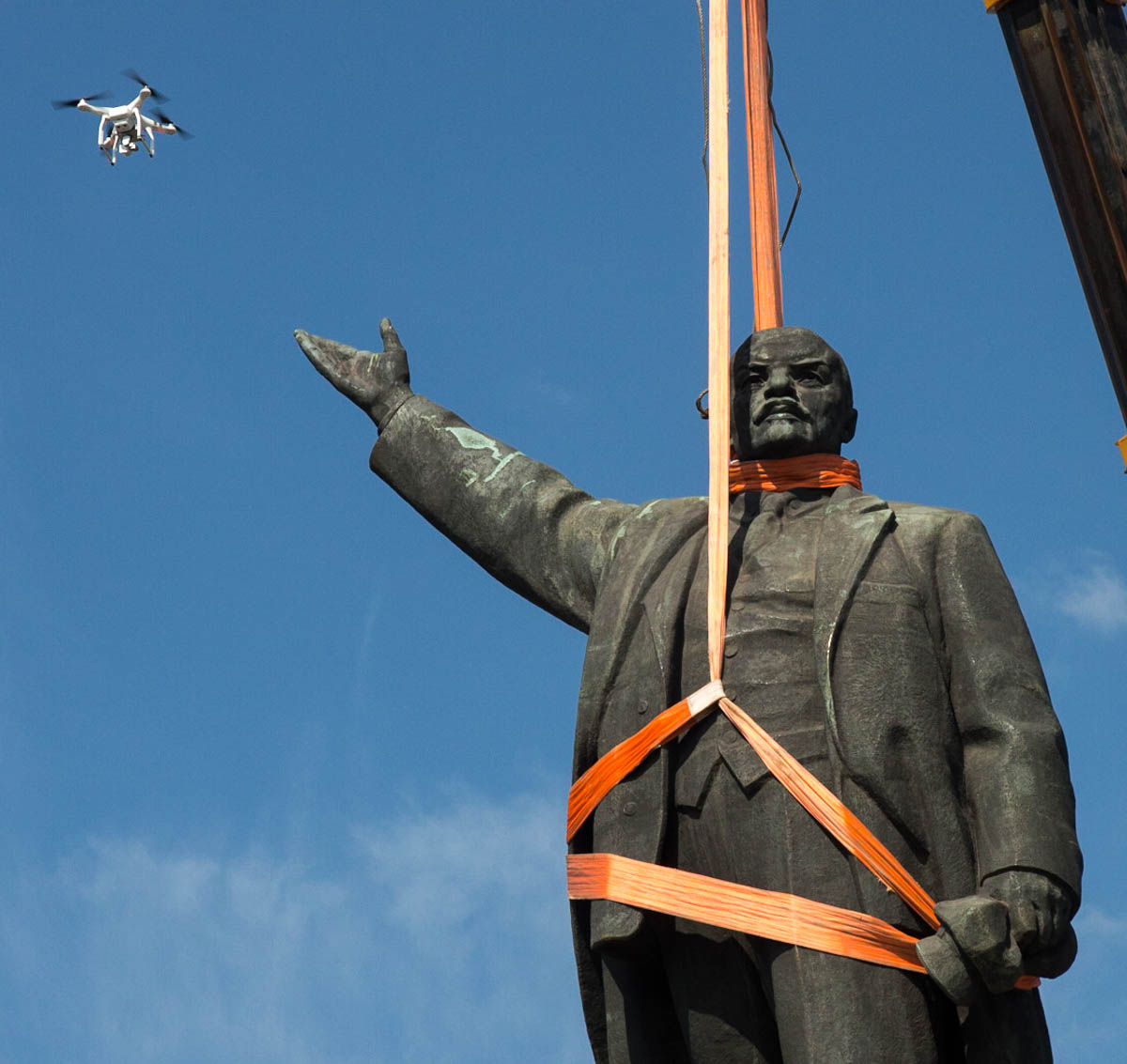 A drone taking photos of the scene flies past the statue. (Frank Follwell) 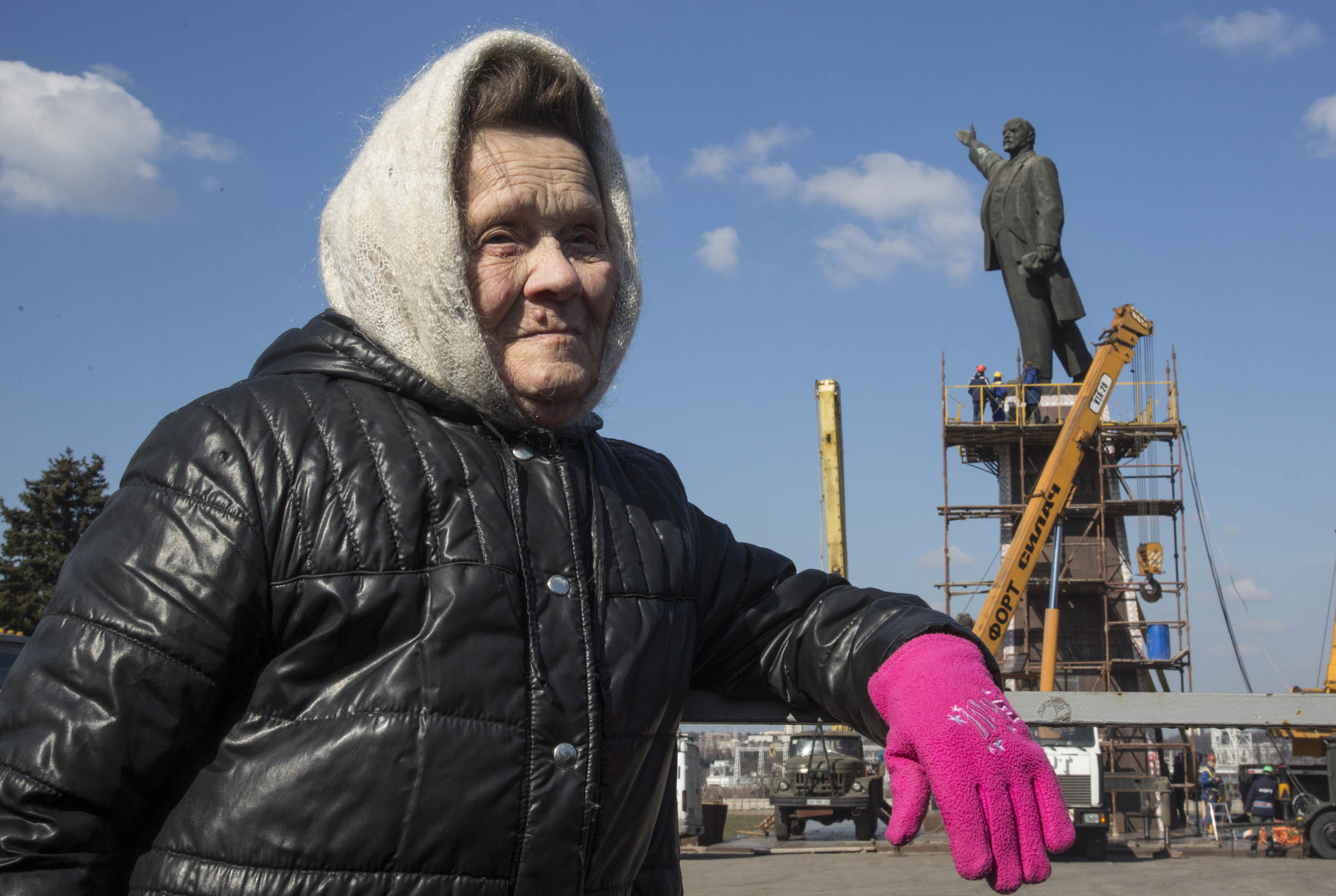 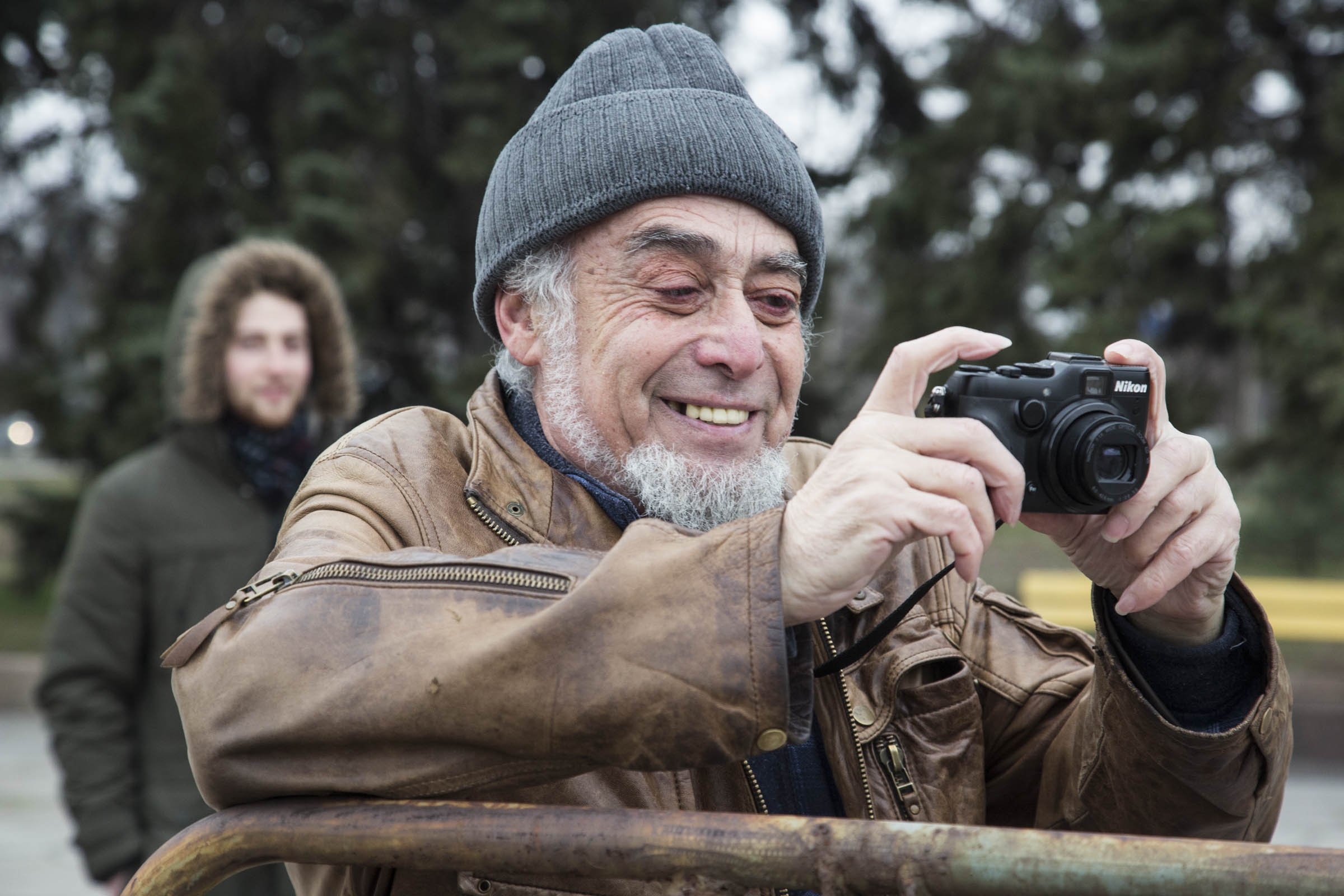 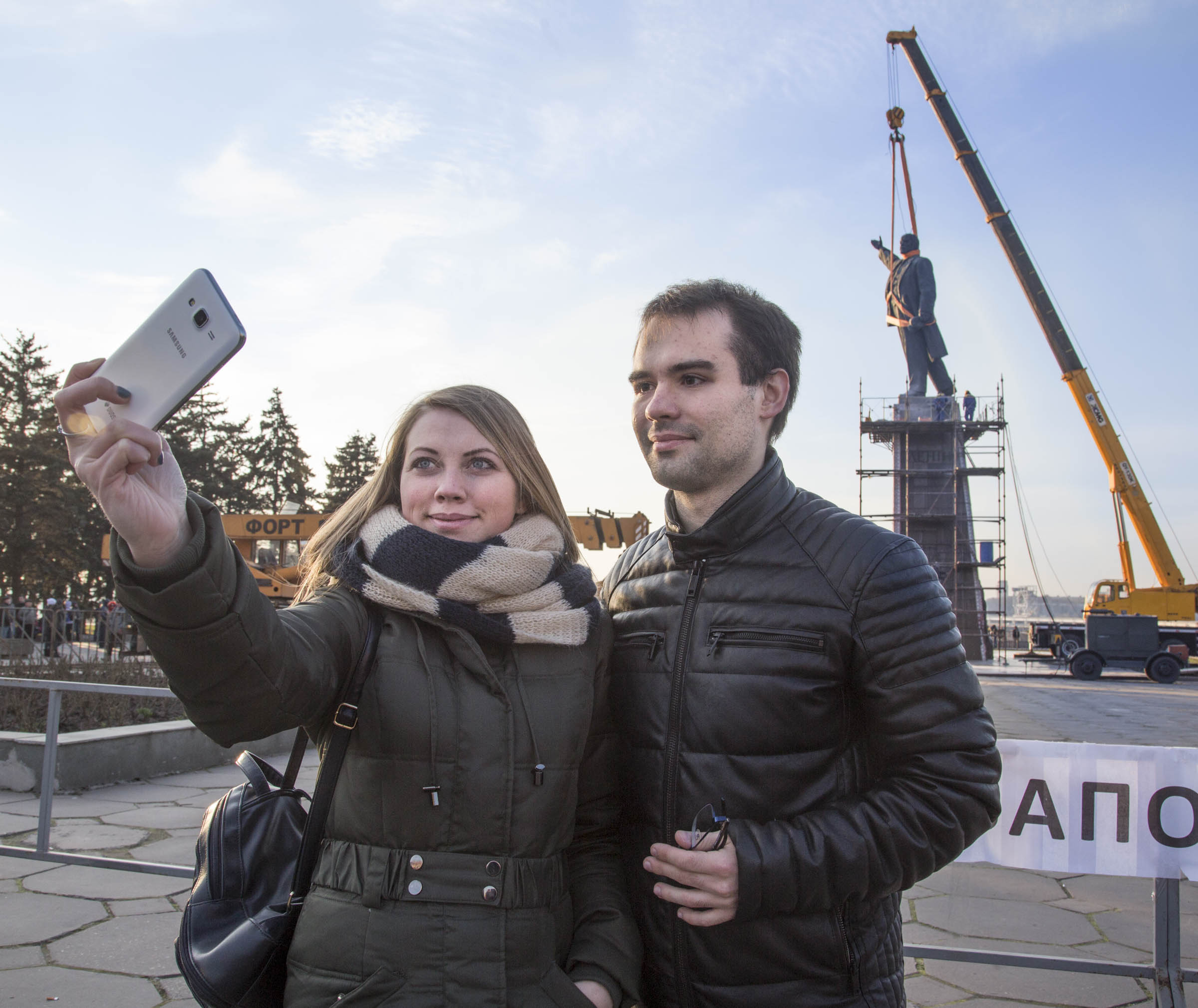 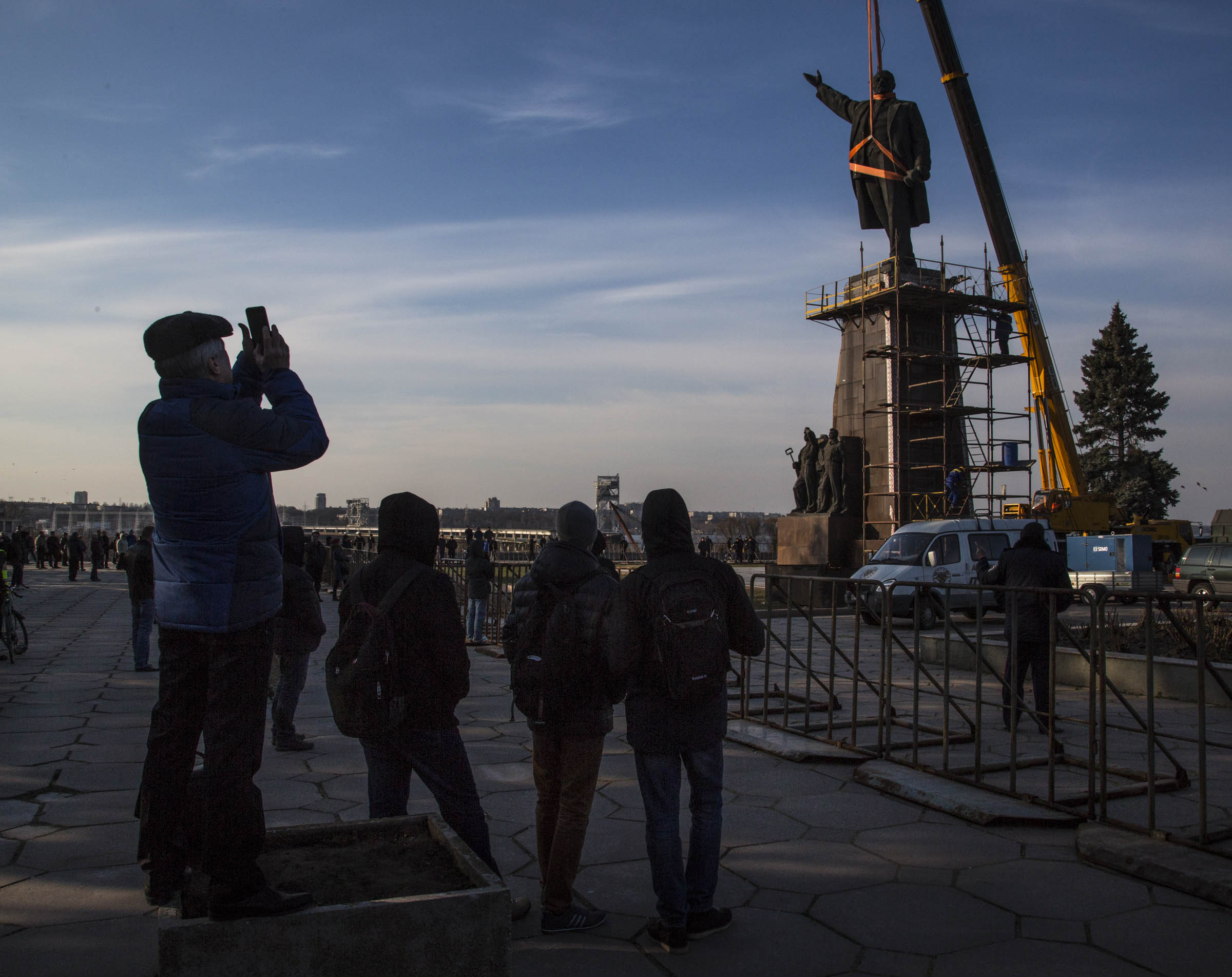 While one group hoisted vodka in raucous farewell toasts, others stood silently, wiping tears over Lenin’s demise. On a rainy afternoon, an elderly woman shouted for workers to stop sawing at the base and belted out a patriotic Russian song. A few made feeble attempts to stop the demolition. Security guards whisked them away.

Our translator explained, “There are lots of Lenin defenders and pro-Russian separatists here. Some have mixed feelings.”

Grigoriy Bensman, 74, was adamant: “I am not for communism, but Lenin should stay. He is part of our history; he did some good.” He credits the Soviet leader for the Dnieper dam, one of the largest in the Soviet Union, which brought electricity to the region in the 1930s.

Two young men eavesdropping nearby were not buying it. They wanted Lenin “down and out of sight. We are looking to the future, not the Soviet past,” Eugeniy Tregger, 21, said. Journalist Kateryna Markova said she had long awaited the fall of the statue. (Frank Follwell)

Likewise, local journalist Kateryna Markova spent 30 hours keeping a vigil for her TV station. As the statue came down, she was overcome by emotion. “My camera was shaking. We have waited so long for this,” said Markova, 26, who grew up across the street from the square. “All my life I could see Lenin from my window. I cannot believe he finally is gone.”

The city straddles the political and linguistic fault lines in Ukraine, where people in the east commonly speak Russian and those in the west speak Ukrainian and identify more closely with Poland and central Europe. In Zaporizhia, a Soviet-style city known for steel plants and an automobile factory, Russian is taught at the university and students move easily between the two languages.

Soviet symbolism is still a sensitive issue. In December 2013, Euromaidan protesters in the capital Kiev pulled down the city’s landmark Lenin statue and smashed it with hammers, marking a turning point in the country’s political crisis. Within months, dozens of other statues of Lenin and other Soviet leaders across the country had been toppled and pro-Russia President Viktor Yanukovych was ousted.

Russia responded by annexing Crimea and backing separatists who seized power in Donbass from troops loyal to Kiev. The fighting has left more than 9,100 dead and 1.5 million displaced.

Though the conflict has stalemated, tension remains high. There are rumors of “sleeper cells” of pro-Russian fighters awaiting orders to agitate Russian nationalists in parts of Ukraine under Kiev’s control, including Zaporizhia.

On our last night in town we invited five bright, English-speaking journalism students to a campus hangout for pizza and beer. All supported closer ties to the European Union and the West. The first toast of the evening was to a “prosperous and free Ukraine.” Were they concerned war could spread to Zaporizhia? “Sure, we are afraid. Why not? We know there are separatists here,” said Andrei, who was about to turn 20. Others nodded in agreement.

According to the students, their grandparents and “other old people” tend to idealize Soviet times, touting free education, free health care and government-subsidized apartments. “They don’t mention the bad stuff that went on under Stalin and other Soviet leaders,” said Andrei.

As we gave farewell hugs, there was a final question: “When you return to America, what will you say about Ukraine?”

“We will say if your generation has its way, this country will be in good hands.”

That led to smiles and light applause. As we headed back to our hotel, there was lingering concern: If Russia does flex its muscle, what price will these promising young Ukrainians have to pay? And, what will the world do about it?

Ricchiardi specializes in international journalism training and conflict reporting. She was in Ukraine on a Fulbright grant.