Tunisia at a crossroads 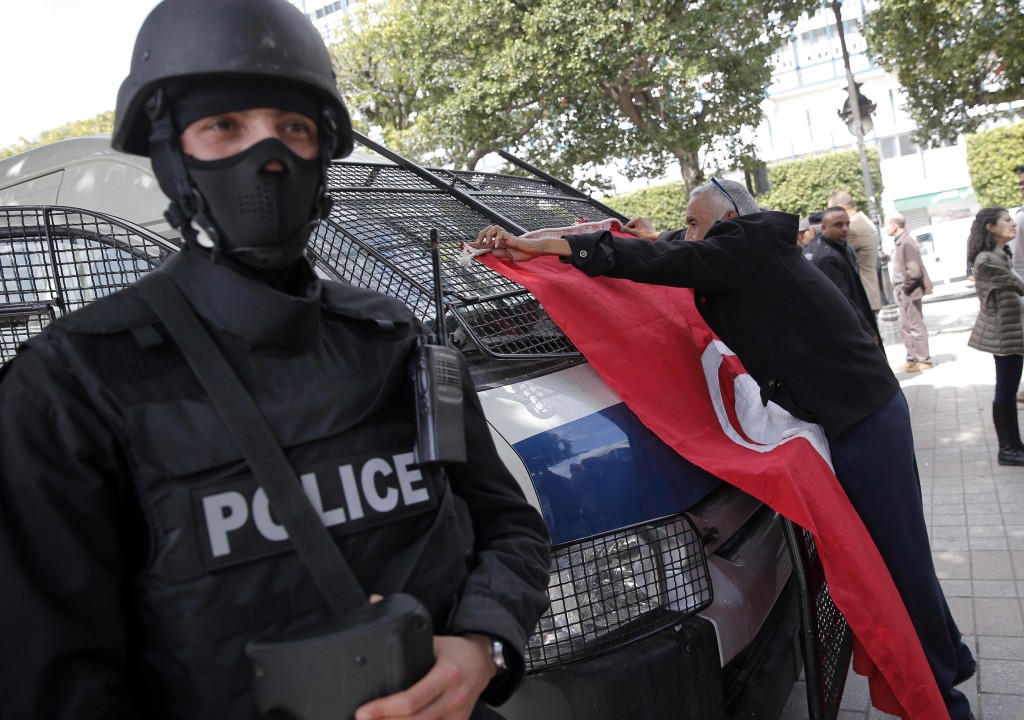 A man places a Tunisian flag onto a police car as a policeman stands guard during a demonstration two days after gunmen attacked the museum and killed scores of people in Tunis, Tunisia, March 20, 2015. (AP Photo/Christophe Ena, File)

Five years after Tunisians toppled dictator Zine El-Abeddine Ben Ali, the country is at a crossroads. The North African state has successfully ratified a constitution, held free elections and four of its pro-democracy groups have been honored with a Nobel Peace Prize. But great challenges remain.

Foremost are security concerns. In neighboring Libya, the Islamic State (ISIL) has found sanctuary in the cities of Sirte and Sabratha. A number of ISIL militants recruited from Tunisia have launched attacks on their homeland after being trained in Sabratha, just 60 miles (97 km) east of the Tunisian border. On Feb. 20, the U.S. attacked what was thought to be an ISIL training camp in the al-Qassar district of Sabratha killing 49. Nourredine Chouchane, believed to be a leader of ISIL in Libya was killed in the attack.

Weeks later, ISIL militants based in Libya attacked the Tunisian border town of Ben Guerdane. According to Al-Monitor, militants used loudspeakers to tell residents they were attacking police and security forces and that the town would be ruled by “the law of God.”  Bloomberg reported that the clashes that ensued led to the deaths of at least 58 people, including 46 ISIL fighters.  One civilian–a 12-year-old girl–was also killed.

The attack has raised fears that ISIL could strike again and put an an already tense region on edge. Kyane Kassiri, a Tunisian computer programming instructor who has worked in Ben Guerdane, said that the province is carefully guarded by the military. “When you go there, the military has checkpoints and they stop you and want to know what you are doing if you are not from there,” Kassiri says, in an interview with Global Journalist.

Tunisia's borderlands aren't the only place of concern. A suicide bombing targeting a bus carrying members of the presidential guard in downtown Tunis killed 12 and injured 20 – and the explosion was so large that it could be heard throughout the capital, al-Jazeera reported. Just blocks from the headquarters of Tunisia's national police force, the attack was an indication that Islamic radicals could strike anywhere, and led President Beji Caid Essebsi to declare a state of emergency and temporarily close the Libyan border.

International tourism, one of Tunisia's most important industries, has yet to recover from two major attacks targeting foreigners last year. In June, a gunman from the impoverished region of Kairouan who had trained in Libya attacked tourists in the Tunisian beach town of Sousse, killing 38–including 30 British citizens–at the beginning of the country's tourism season. The beach massacre came three months after gunmen wearing military uniforms opened fire on people at Tunis's famed Bardo Museum, killing 19, including 17 foreigners.

Even if Tunisia is able to beat back advances by ISIL, its fledgling democracy is also threatened by a tepid economy and widening corruption.

Most economic development in the country has not gone to creating news jobs for the unemployed or fixing problems in the interior regions. “There is not a strong political will to reform,” says Yasmine Ryan, a correspondent for U.K.-based newsite The Independent, who has covered the country since before the revolution. “The status quo caters to existing business interests and a corrupt group at the top gives money to both" of the country's two largest political parties.

Finally, despite recent achievements, more must be done to institutionalize democracy. Ines Jaibi, a lawyer who is the executive director of Young Tunisian Leaders, a group aimed at empowering youth, says much work needs to be done on implementing the rule of law and developing the constitutional court system. She's particularly concerned that a judicial panel has not yet picked who will serve on the court, and worries that judges will be chosen for political loyalties rather than their independence or legal skills.

“The constitutional court is the only institution set up in Tunisia to provide oversight so that citizens are protected from possible violations of the law by the authorities," Jaibi says, in an interview.

Whatever happens in Tunisia, the country will likely rise in importance to the United States. Before the revolution, Tunisia was rarely on the radar of U.S. policymakers. That's changed as the country–with the help of the U.S. and its allies–has emerged as the lone surviving democracy born of the revolutions of 2011 and 2012.   “The Tunisian revolution was a clear opportunity for the United States government to support a democratic process, [and] the U.S. government quickly increased security and economic assistance,” says Sarah Yerkes a fellow at the Brookings Institution who previously worked on Tunisian issues at the State Department.