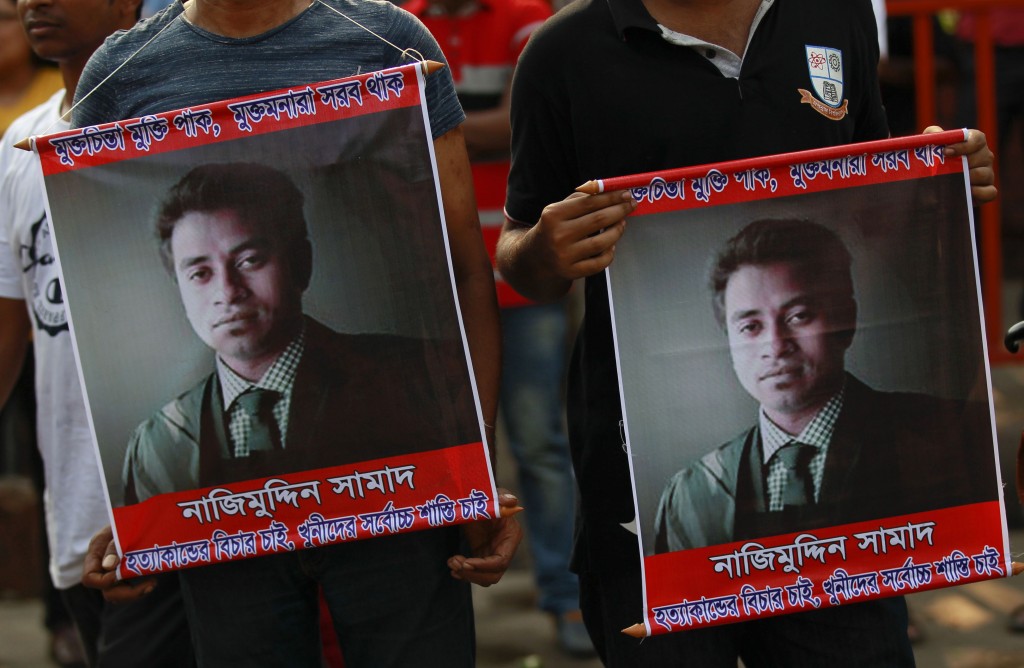 People carry portraits of student activist Nazimuddin Samad as they attend a rally to demand arrest of three motorcycle-riding assailants who hacked and shot Samad to death, in Dhaka, Bangladesh, Friday, April 8, 2016. Police suspect 28-year-old Samad was targeted for his outspoken atheism in the Muslim majority country and for supporting a 2013 movement demanding capital punishment for war crimes involving the country's independence war against Pakistan in 1971. (AP Photo)

A Bangladeshi blogger and law student was attacked and killed by machete-wielding men on a busy road in the capital Dhaka after a series of blog posts critical of the government and Islam. He is the sixth so-called "atheist blogger" to be killed in the past three years in similar public attacks.

Nazimuddin Samad, 28, was assaulted while walking home from classes on the evening of April 6, according to  the Dhaka Tribune. The killers drove up to Samad on a motorcycle, attacked him with machetes and  then shot him before making their escape.

Ansar al-Islam, the Bangladeshi branch of al-Qaida in the Indian Sub-continent (AQIS), claimed responsibility. However, police suspect members of a separate Islamic extremest group named Ansarullah Bangla Team may be responsible for Samad's death, according to the Dhaka Tribune.

Samad had written frequently about atheism, a controversial topic in the Muslim majority country. He may also have been targeted for supporting the Shahbag movement in 2013, which demanded capital punishment for those convicted of war crimes during Bangladesh’s 1971 war of independence from Pakistan in 1971, according to Al Jazeera.

Samad was on a "hit list" of 84 atheist bloggers, writers and activists that a group of Islamic militants sent to Bangladesh's interior ministry in 2013. Three of the other four bloggers killed in the last year were also on the list.  They were Avijit Roy, Oyasiqur Rahman, Ananta Bijoy Das and Niladri Chattapadhay.

The night before he was attacked, Samad  posted a critique of the government and the “deterioration of law and order” on his Facebook page. His post opposed a move to add Islam as a state religion to the Bangladeshi constitution, according to the Guardian.

Correction: Due to an editing error, an earlier version of this post said Samad was the fifth blogger killed since 2013. He is the sixth blogger to be killed since then.