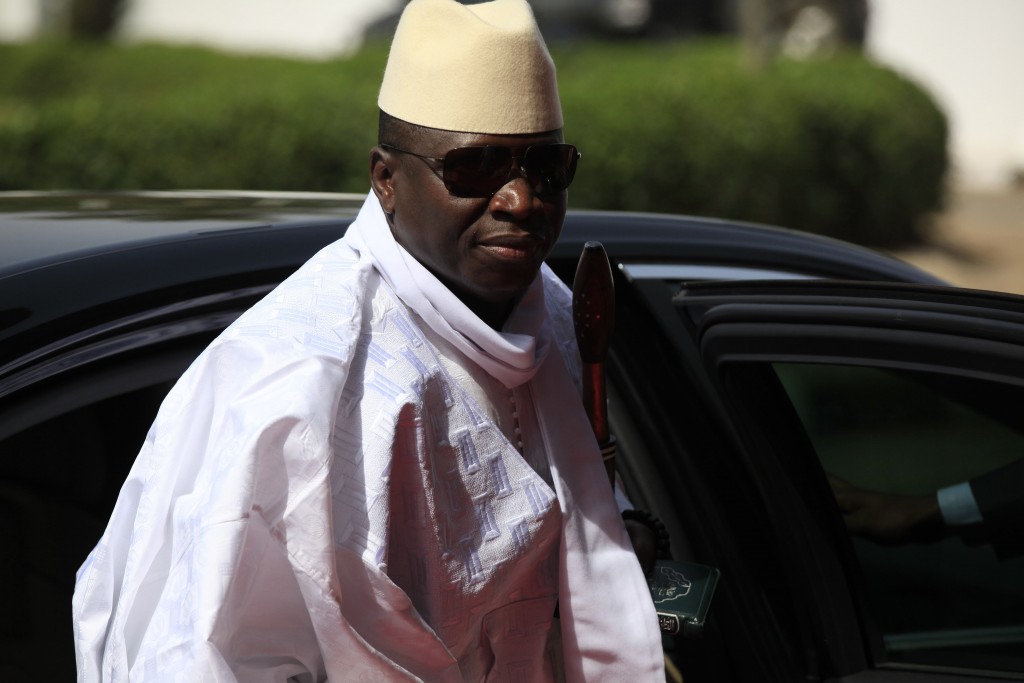 Gambia's President Yahya Jammeh arrives for a summit to address a seminar on security during an event marking the centenary of the unification of Nigeria's north and south in Abuja, Nigeria, Feb. 27, 2014. (AP Photo/Sunday Alamba,)

"The men continued to use heavy sticks to hit me. At some point, they also placed a plastic bag over my head and I felt like I was going to suffocate."

Alhagie Jobe had a good life in the tiny West African nation of The Gambia. He supported his wife and two children with a good salary as a deputy editor for the Daily Observer, a pro-government newspaper in the capital Banjul. But when Jobe and one of his reporters began pursuing a story about a military officer who allegedly refused an order to take part in the execution of nine prisoners, his life changed. He was arrested in 2013 and held for 18 months in harsh conditions.

Such treatment isn't unknown in The Gambia where President Yahya Jammeh's penchant for bizarre statements, like claiming he has developed an herbal cure for HIV/AIDS or that wearing tight clothes and underwear leads to infertility, is matched only by his harsh treatment of critics. Human rights abuses in the country are "rampant" and state security forces and paramilitaries carry out summary executions and unlawful detentions of journalists, rights activists and political opponents of Jammeh, Human Rights Watch said in a September report.

After he was acquitted and released in 2014, Jobe, fled to neighboring Senegal out of fear he would be prosecuted again. Now 35, he struggles to find work in a country where most media is in French. He spoke with Global Journalist's Joseph Carey about being pursued by The Gambia's intelligence service and being held in a "crocodile hole."

Global Journalist: Tell us about your arrest.

Jobe: I was arrested by officers of the notorious National Intelligence Agency (NIA) at gunpoint for an article I was investigating with one of my reporters and not completed for publication. The article was relating to the stand taken by one army officer, Major Lamin Touray, against executive directives to take part in the execution of nine condemned prisoners. He refused to take part in the execution of the prisoners and was arrested and later released and fled out of the country.

On Feb. 8, 2013 on my way home from the office at around [11 p.m.], the NIA officers followed my car, and eventually overtook me. Their car then turned around and tried to block my way. The NIA car then hit my car and it swerved off the road as a result and came to a standstill against a wall.

The officers took me to the NIA headquarters in Banjul, and locked me in a small, dark cell with no windows called a ‘crocodile hole.' The cell was completely dark, and there was a smell of human waste.

There was one other detainee sharing the cell withe me; however I could not see him due to the complete darkness. There was no mattress, so I slept on the ground. I was detained in this cell for three nights between Feb. 8, 2013 and Feb. 11, 2013. We had to use a bucket as a toilet. Each day, an NIA officer would take us to a toilet and we would have to clean out the bucket if it was full. It was very frightening not being able to see anything in our cell. GJ: Were you tortured?

Jobe: On Feb. 10, 2013 at around 1 a.m. or 2 a.m., two plain-clothed individuals visited my cell. They removed me from my cell and told me that someone wanted to speak with me. They then escorted me to the conference hall upstairs in the NIA headquarters.

There was no light in the room. As it was dark, I asked whether I should go inside. I also asked them to come inside with me, but they told me to enter the room alone. I was then forced into the room.

Immediately as I entered, I was attacked in the dark by what felt like multiple men who were inside waiting for me. I later learned from the director of investigations that the individuals responsible were Jungulars. The term Jungulars, or ‘black black boys’, is the name given to President Jammeh’s personal para-military security force.

When I regained consciousness, I counted seven men present in the room. They started talking to me about the article on Major Touray. They told me that with my article I had created a bad image of The Gambia and that I was trying to sabotage the Gambian government. This was the first time I heard that the Major Touray article was the reason for my arrest. I told them that the article was factual and true, and that I was not trying to sabotage the Gambian Government. I said that we all knew what had happened with Major Touray, and that they should not tell me what I should or should not report on. They then started beating me again.

The men continued to use heavy sticks to hit me. At some point, they also placed a plastic bag over my head and I felt like I was going to suffocate. I believe the Jungulars had me in the conference hall for around two hours. However, I remember losing consciousness twice during my beating so it is difficult to recall. The Jungulars who had beaten me told me that they would come for me every night until I would provide a favorable statement. I sustained injuries all over my body, including the soles of my feet. Global Journalist: During your trial, you were held in a notorious prison called Mile II. Can you describe what it was like?

Jobe: The conditions at the prison were so bad, they are impossible to describe. Mile II prison must be the worst prison in the world. I was sharing a 5 x 4 meter cell with 32 people at any given time. It was overcrowded. The food was horrible. I did not have access to clean water or a bathroom.

Global Journalist: Why did your case move so slowly?

Jobe: The case took 17 months before being completed. Between my arraignment in March 2013 and May 2013...there were hearings on a weekly basis but each time, the hearings were adjourned as the prosecution was not prepared to proceed.

It’s a norm in The Gambia that anyone under trial will be convicted. So because of this, I never had any hope that one day I will be acquitted and discharged. Thanks to the boldness of the judge, the reality came to light and I regained my freedom.

Global Journalist: You were ultimately acquitted and released from prison in 2014. Why did you decide to leave the country?

Jobe: I was only able to be at home for less than one month after my acquittal. The prosecution appealed the judgment…I then consulted my lawyer and his best advice was to flee out of the country because he feared there might be injustice in the appeal case. I therefore left The Gambia to Dakar, Senegal, the same month with my wife and daughters who sometimes travel back and forth between The Gambia and Senegal. It was not an easy decision though because life in exile is not easy. But for my security, I had no option.

Global Journalist: What is your current situation in Senegal?

Jobe: My situation in Dakar is very difficult. My intention is to move further away from The Gambia and not to continue to stay in Senegal. I do not feel safe in Senegal because it is so close to The Gambia, where I am still wanted by the authorities because of the appeal in my case.

Global Journalist: What are your views of President Jammeh?

Jobe: President Yahya Jammeh is ruling The Gambia with an iron fist since he came to power in July 1994 through a military coup. The culture of persecution, violence, and injustice towards journalists in The Gambia remains pervasive…President Jammeh branded journalists as “illegitimate sons of Africa” and went as far as calling on citizens not to buy local newspapers, so that journalists might starve.

Indeed, I wish to return home but not under the repressive and dictatorial regime of President Jammeh.