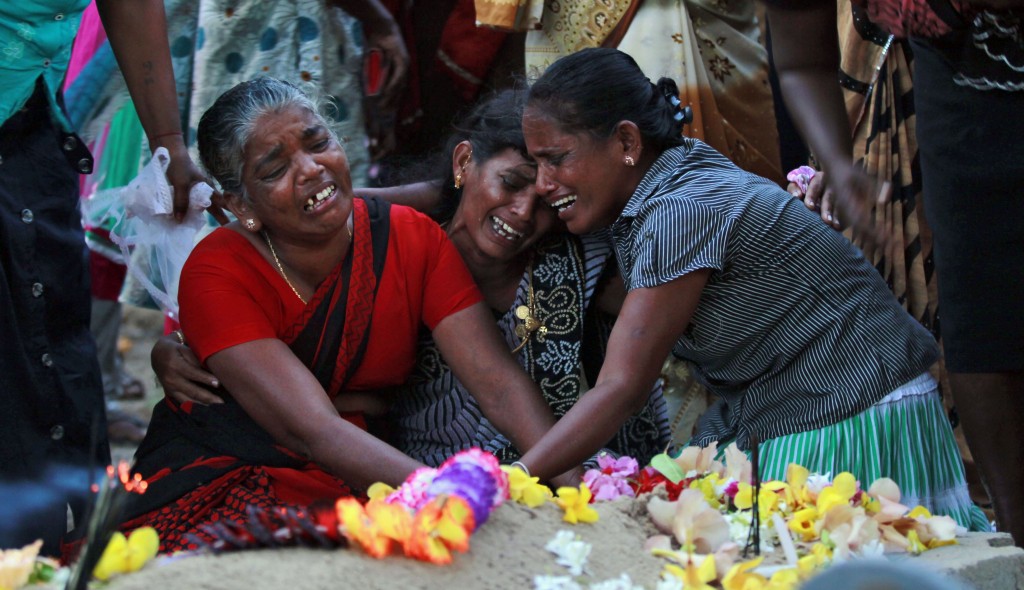 In this Monday, May 18, 2015 photo, Sri Lankan ethnic Tamil women cry at the grave of their relatives who died in a fierce fighting between the army and Tamil Tiger rebels, outside a church in Mullivaikkal, about 335 kilometers (208 miles) northeast of Sri Lanka. Sri Lanka's ethnic Tamil politicians and a few civilians gathered Monday under heavy surveillance at a ceremony to honor thousands of dead on the battleground of the final days of the decades-long civil war that ended in 2009. (AP Photo/Eranga Jayawardena)

When columnist and human rights activist Sunanda Deshapriya criticized the Sri Lankan government’s war against Tamil rebels, he didn’t know he wouldn’t be able to return to his country for six years. Deshapriya was in Geneva in May 2009 when the Sri Lanka's army defeated the Liberation Tigers of Tamil Eelam (LTTE), ending a 26-year civil war marred by alleged atrocities by both sides. The freelance journalist and activist had traveled to Geneva to voice his concerns about the Sri Lankan government’s war conduct and post-war treatment of Tamil people by the Sinhalese majority to the U.N. Human Rights Council.

Deshapriya, who is Sinhalese, had been advised to leave Sri Lanka by his colleagues. He decided to stay in Switzerland to avoid reprisals for what some fellow Sinhalese considered traitorous actions. At the time, threats against journalists could lead to fatal consequences: 22 journalists were killed in the country from 2004 to 2009, according to the Committee to Protect Journalists.

Deshapriya started his career as a journalist in the late 1970s as a freelancer. He edited a newsletter called Justice in the 1980s and helped transform it into a monthly and then weekly paper. By the 2000s Deshapriya became more involved in human rights and media freedom activism. He writes a column that appears regularly in the Sinhalese-language newspaper Ravaya Sinhala.

He was able to return to Sri Lanka in 2015 after a new government took power, but says it will be a while before press freedom and democracy are realized in the country. Deshapriya now spends half the year in Geneva and the other half in Colombo, the capital of Sri Lanka. He spoke with Global Journalist about challenges he faced as an exile and those facing the press in Sri Lanka.

Global Journalist: Was the climate for journalists always difficult in Sri Lanka?

Sunanda Deshapriya: Yes. We had a very difficult time in the early 1990s. I was editing a magazine in those years. In the 1990s we had…a really authoritarian government, so it was an uphill battle to even print. Our printing press was burned and sealed and a case of criminal defamation was filed against me. After the regime change in 1994, things started to change.

GJ: So if the situation for journalists in Sri Lanka improved after 1994, what made you leave the country in 2009?

Deshapriya: I have been a leading figure in the free media movement and an anti-war activist. I led several movements against the war and for press freedom. I was one of the major targets of the regime but I still tried to manage and live in the country, in hiding.

A number of our colleagues were killed and assaulted, some of them were kidnapped. In the late stages of the war, there was a lot of pressure for us to leave the country, mainly from our colleagues. I went to India for two months, then Nepal and then came to Geneva. I come from the Sinhalese and Buddhist community, and when they were celebrating [the end of the war] in the country I was in Geneva speaking against the war. That kind of made me the No. 1 traitor in the country. It became impossible for me to go back for some time.

GJ: After the Tamil Tigers surrendered in 2009, did the climate for journalists and human rights activists improve? Deshapriya: The situation did not really change. Journalists were kidnapped and assaulted even until 2010. The threats stopped, but the media suppression continued until the regime change two years ago.

GJ: What was challenging about practicing journalism in exile?

Deshapriya: You get disconnected from the country. Once you are in exile, you have to find a way to live, you have survival issues, you have language issues. I was able to continue my writing but most others had to give up, become things like chicken farmers.

GJ: What was your return to Sri Lanka like?

Deshapriya: I returned as soon as the regime changed. I gave up my asylum status here [Geneva] and returned for two months. Reintegration is difficult if you want to go into media or even other sectors. I still went back and tried to involve myself with media and civil society groups that work for media freedom in the country. I am Sinhalese and well known in the country, so in that sense I am privileged. Some Tamil journalists may still face problems if they come back.

GJ: Since you have returned, has the climate for journalists improved?

Deshapriya: After the regime change, four popular Tamil websites that have been working from outside of the country have now started offices in Colombo — legally. That shows that there is a space for dissenting voices. Prominent Tamil journalists who speak up still face problems. The intelligence operators that have been there for 20 years are still there…that has to be addressed. Demilitarization has not completely taken place in the north. There is progress, but there is a lot to be changed before journalists in the north feel they are free.