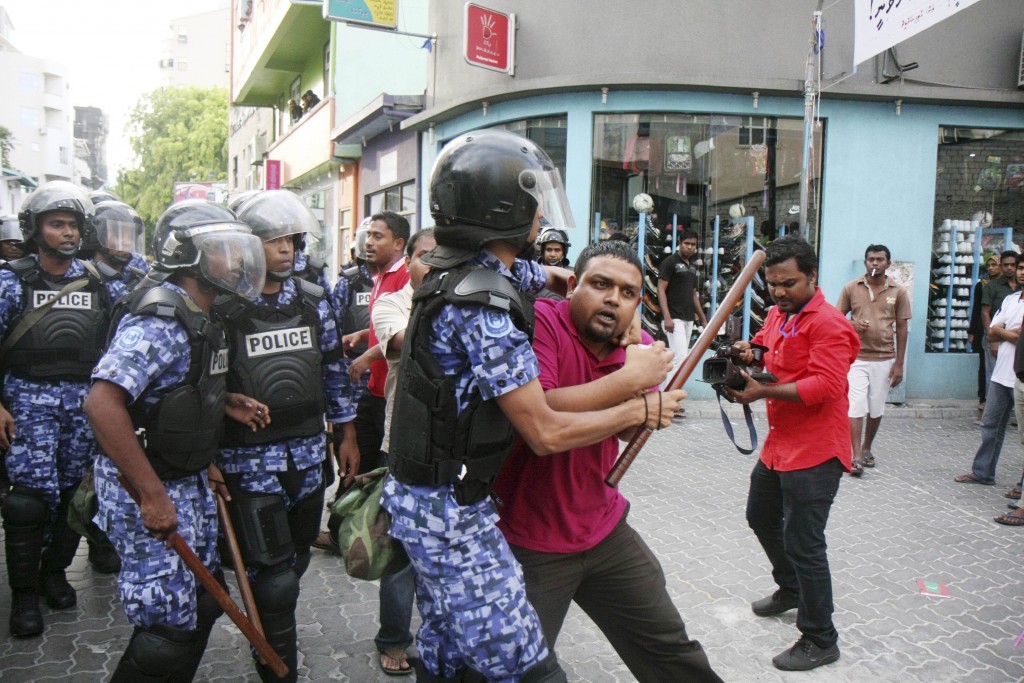 Maldivian police officers detain a journalist during a protest in Male, Maldives, Sunday, May. 01, 2011. Maldives' police have used tear gas and batons to break up a protest demanding that President Mohamad Nasheed step down. Dozens of people have been arrested.(AP Photo/Sinan Hussain)

The government of the Indian Ocean nation of the Maldives  has decided to put on trial two journalists for an opposition television station on charges related to their coverage of an anti-government rally in March 2015.

The move to prosecute videographer Adam Zareer and his colleague Mohamed Wisam of Raajje TV over the year-old incident comes after the two were among 18 reporters arrested after covering or taking part in an April 3 sit-in protesting a worsening media climate in the Maldives, according to the the Committee to Protect Journalists. Zareer and Wisam appeared in court April 17 for a preliminary hearing, Raajje TV said on its website.

The two had been arrested in March 2015 while covering a while covering a protest in the capital Male calling for the release of the country's jailed former president.  Prosecutors have charged them with obstructing a police officer, and if convicted they face up to six months in jail and a fine of MVR 12,000 ($783), the Maldives Independent said.

The government of the archipelago nation of 330,000 has moved against dissent and opposition journalists since arresting former President Mohamed Nasheed on terrrorism charges last year. Nasheed has been represented by human rights lawyer Amal Clooney, spouse of actor George Clooney, and his jailing has garnered criticism from rights groups including Amnesty International. In December, the European Parliament approved a resolution calling for European nations and the EU to impose sanctions members and supporters of current President Abdulla Yameen.

"The timing of the criminal charges against Raajje TV's staff suggests that they are retaliation for covering the government's mounting crackdown on press freedom," said Sumit Galhotra, an Asia researcher at CPJ, in a statement. "Authorities' continuing pressure on journalists in the Maldives threatens to undermine the country's democracy."

The Raajje TV journalists will be the first journalists to stand trial since the Maldives adopted a new constitution in August 2008, according to local reports.

On April 10, 183 Maldivian journalists signed a petition urging the government to tackle threats to press freedom. The petition, which was submitted to the president’s office and the supreme court, called for the withdrawal of a bill criminalizing defamation and an end impunity for crimes committed against the press.  The petition also called for the withdrawal of charges against the Raajje TV journalists facing prosecution for obstructing police officers.

The Maldivian government has singled out Raajje TV for harassment several times in recent years, according to CPJ. In 2013, six masked men broke into Raajje TV and used gasoline to set the studio on fire, according to CCTV footage and news reports. The same year, a Raajje TV reporter was attacked near an artificial beach with an iron rod, causing serious head and face injuries.