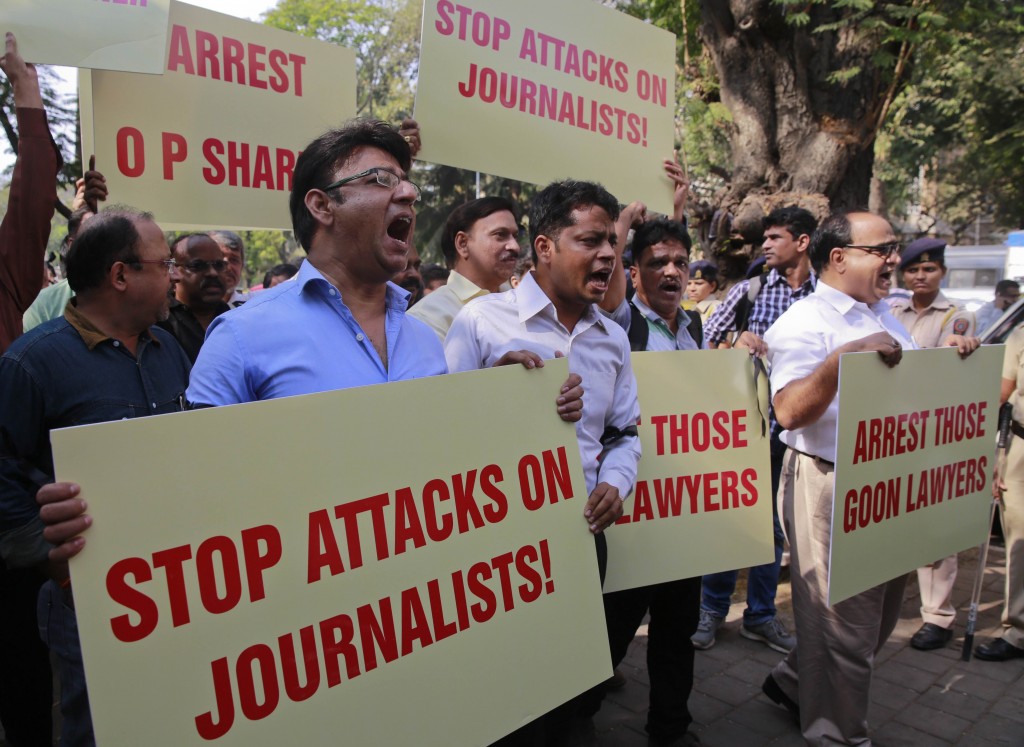 Indian journalists hold placards during a protest against attack on journalists in Mumbai, India, Wednesday, Feb. 17, 2016. On Monday, mobs of lawyers and Bharatiya Janata Party supporters attacked students and journalists outside a Delhi court where a university student leader arrested under colonial-era sedition laws was appearing. Again on Wednesday, about a dozen lawyers threw rocks at reporters and protesters at the same court. (AP Photo/Rafiq Maqbool)

A newspaper reporter in the troubled central Indian state of Chhattisgarh has been arrested on a seven-month-old complaint filed by a principal whose school was the subject of reports of a cheating scandal.

Deepak Jaiswal, who works for local newspaper Dainik Dainandini, was arrested by Chhattisgarh police outside of a court in the Bastar district of the state March 26 based on the complaints by the principal according to the Indian Express.

Jaiswal and Prabhat Singh, a reporter for Hindi-language daily Patrika, had reported on teachers helping students at the school cheat on their examinations, the Indian news website Scroll.in reported. The school’s principal had complained to local authorities in August 2015 that Jaiswal and Singh had trespassed on school grounds and threatened to report negatively on the school if they were not given access.

In a separate matter, Singh was arrested March 23 on charges of defaming an anti-Communist group opposed to Chhattisgarh's Maoist rebel movement, according to Scroll.in. Maoist Communist rebels in Chhattisgarh and the neighboring state of Andra Pradesh have been fighting a low-intensity conflict against the Indian government for decades, seeking land rights and better services for the region’s impoverished Adivasi people.

Singh's arrest comes comes a month after another journalist in Chhattisgarh was harassed by a mob that accused her of supporting Maoist rebels. Malini Subramaniam, a journalist for Scroll.in, had stones thrown at her house in the early hours of Feb. 8. Subramaniam has since left Chhattisgarh, according to Scroll.in.

Days after Subramaniam left the state, another journalist also fled Chhattisgarh amid safety concerns, according to the Committee to Protect Journalists. Alok Prakash Putul, who works for BBC Hindi, was reporting on the conflict between security personnel and Maoist rebels in a village in the Bastar region when a villager informed Putul that someone was looking for him, and that anything could happen, according to a report filed by Putul on BBC Hindi.

Journalists and lawyers in Chhattisgarh say there has been a campaign to silence critical reporting there, where there has been a decades-long conflict between Maoist rebels and security forces, according to CPJ.