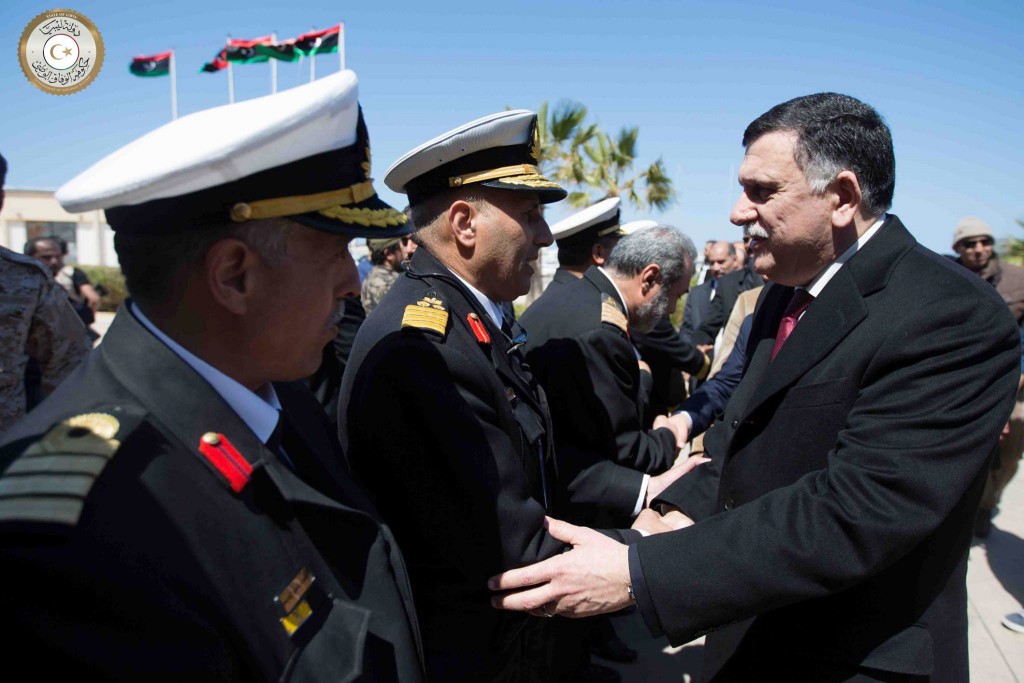 Fayez Serraj, right, of the U.N.-brokered Libyan unity government on arrival in Tripoli, Libya. He arrived by sea with six deputies to set up a temporary seat of power in a naval base despite threats from competing factions, March 30, 2016 (Media office of the Unity Government / GNA Media via AP)

News this week that a new United Nations-backed government had begun to establish itself in Libya has been greeted as a hopeful sign that the country may emerge from the political chaos that followed the fall of Moammar Gadhafi in 2011.

Since Gadhafi's fall, shifting political organizations and militias have grappled for control, leaving a power vacuum that has enabled the Islamic State [ISIL] and human traffickers to thrive. To understand the challenges the U.N.-backed Government of National Accord [GNA] it helps to understand the various groups who have controlled much of the country for the past two years.

In 2014, Libya experienced a second civil war that left it with two rival governments: the Islamist-leaning General National Congress [GNC] in Tripoli and western Libya, and the internationally-recognized House of Representatives in the city of Tobruk in eastern Libya. Amid the chaos, ISIL  has gained a foothold in the central city of Sirte where it has trained militants to launch attacks in neighboring Tunisia.

The new U.N.-backed government must not only win over members of these two rival governments, but the true power brokers in Libyan politics: a diverse array of tribes and militias that control political and military power on the local level. Many of these militias are still paid by Libya's central bank, even as they act as security forces for local politicians.

Winning the loyalty of these militias and local groups will be a major challenge for GNA's Presidential Council, which until recently was based in a luxury hotel in Tunisia.

“The only thing that can succeed would be a bottom up approach,” says Jason Pack of Libya-Analysis.com. “Working with actual stakeholders, people who control the arms and the councils, and getting them to buy into a true unity government.”

Below, the basics of what you need to know about Libya's most powerful players. Operation Dignity is an anti-Islamist group of militias launched by Haftar after he called for a suspension of government in 2014 and suggested instituting a military council instead. Various eastern militias gave him their support, including the Saiqa forces from Benghazi, where he enjoys strong public support. In March of 2015, the Tobruk government officially made Haftar the head of the Libyan National Army – a move critics argue gave Haftar more legitimacy to fuel his political ambitions. Some factions in western Libya including the Zintani militias, the Warshefana forces and militias loyal to the leader of the Petroleum Facilities Guard support Haftar's force, but are largely independent.

Mohamed Eljarh, a Libyan political analyst with the Atlantic Council, says that one challenge for the U.N.-backed government is that Haftar, an outspoken anti-Islamist, appears to have ambitions to rule the country himself. However Haftar is viewed differently in western and eastern Libya.

"It's very difficult to reconcile these two power centers due to the polarizing and divisive nature of General Khalifa Haftar," says Eljarh, in an interview. "He's not acceptable in Misrata [in western Libya], but is hailed as a hero and a symbol in eastern Libya."

Even in eastern Libya, the House of Representatives and Haftar's forces aren't without opposition. The Revolutionary Shura Council was formed as a response to Haftar’s broad offensive in 2014. The Shura Council is comprised of a number of Benghazi-based militias, the February 17th Martyrs’ Brigade, another regional branch of the Libya Shield force (Libya Shield Force 1) and – controversially –  Ansar al-Sharia, which has been accused of involvement in the 2012 attack on the U.S. embassy in Benghazi. A member of a militia fires on the Islamic State near the city of Benghazi, March 10, 2016. (AP Photo/Mohammed El-Shaiky)

Libya Dawn is a diverse coalition of militias that formed in 2014 to fight pro-Haftar Zinanti militias in Tripoli. The largest component of Dawn are fighters from the Libya Shield Central Region force, which originally came from the prosperous port city of Misrata. Some components of the group have been recently announced they'll support the U.N.-backed government and others have not.

Two of the strongest Misrata-based militias are the Central Shield Third Force and the Halbus Brigade, says The Atlantic Council's Eljarh. Both have pledged allegiance to the new U.N.-backed government. However, another major force in the coalition, the Islamist-leaning al-Nasr Brigade has decided to oppose the new unity government. Generally, militias in the Libya Dawn coalition are Islamist and oppose Haftar's secular ideology.

The GNC does not control all of western Libya. Also present are the pro-Haftar Battalion 166 and the Libyan Petroleum Facilities Guard, both of which have fought ISIL around its stronghold in the city of Sirte. The small town of Zintan also hosts anti-Libya Dawn militias like al-Sawaiq and al-Qaqa, and include former pro-Gaddafi fighters.

Amid the political vacuum, ISIL has created a stronghold in the central coastal city of Sirte. Eljarh estimates the group’s control extends over 120 miles (193 km) along the Mediterranean coast. ISIL also has cells in Tripoli and Benghazi, and has reportedly attracted members of Ansar al-Sharia and other Islamic extremists in the region.

By turning Sirte into a training ground for ISIL fighters, the group has been able to launch attacks on neighboring countries.

“It’s been a constant cause of consternation,” said Mohamed Madi, a reporter for the BBC News and former Libya analyst for BBC Monitoring. “It’s been confirmed that attackers go across the porous border of Algeria, attack and then turn back. [Egyptian President] Abdel Fattah el-Sisi has been very worried that militants have also tried to cross the border, and that’s put a strain on relations.”

Furthermore, analysts agree that discord about who should fight the ISIL – on both a local and international level – is hampering the efficiency of resistance.

“Libya is at a quagmire,” Pack said. “Different western countries are taking actions against IS independently of the GNA. French special forces are working with General Haftar. The American special forces are doing surveillance and airstrikes. Libya is in a chaos where you have many political and military actors playing on the ground.”

Government of National Accord

The U.N.-backed government is led by a nine-member body called the Presidential Council. Prime Minister Fayez Serraj and six other members of the council arrived in Tripoli by boat from Tunisia at the beginning of April, and were initially met with acceptance. While some elements of the GNC government in Tripoli have vowed to support it, the GNC's Prime Minister has vowed "peaceful resistance," according to the New York Times.

The Times also reported that Serraj’s officials are planning to establish control of key ministries in the coming days, but that people working in Libya’s various ministries are already confused about which leaders to follow.