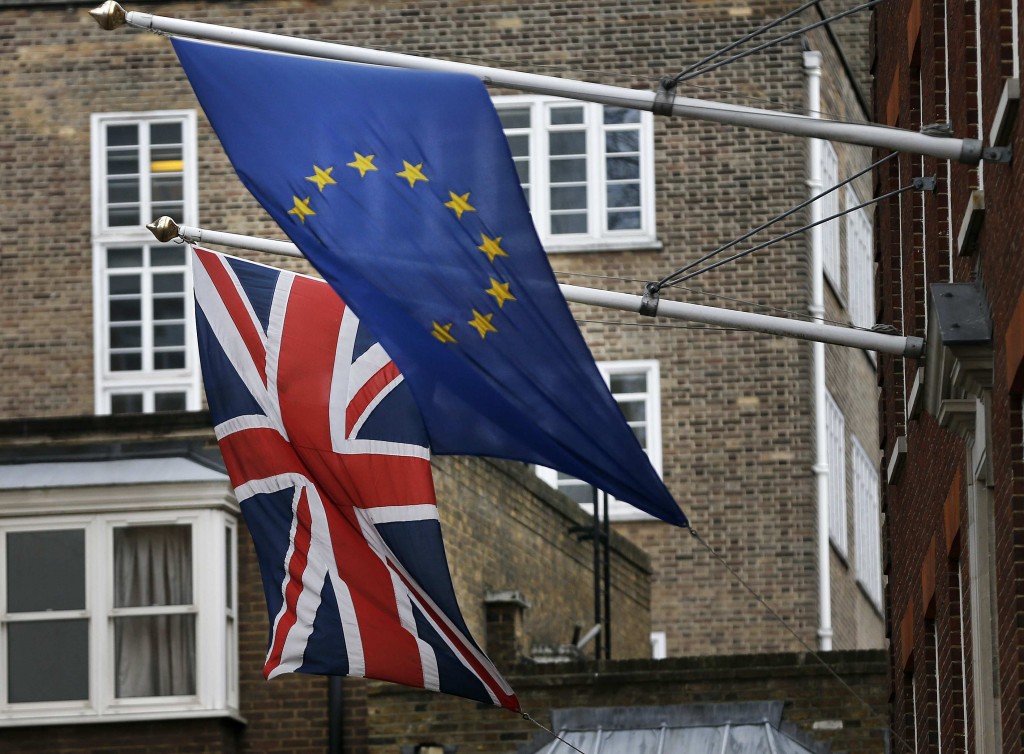 A EU flag hangs beside the Union Jack at the Europa House in London, Feb. 17, 2016. (AP Photo/Frank Augstein)

Should the British choose to leave the European Union after a June 23 referendum, the effects could be far-reaching. If the United Kingdom does vote to leave, the British government will have to negotiate new agreements with the EU on a range of issues from travel to trade to banking regulations.

Prime Minister David Cameron and those advocating that the U.K. stay in warn that the country will be worse off as a result, with a poorer economy and less global influence even as geography and trade ties means it remains effectively subject to decisions in Brussels without having the means to alter them. Supporters of leaving the EU argue that it can negotiate more favorable trade and immigration agreements with the EU from the outside and shed onerous EU regulations in the process.

Below, a look at some of the points of contention:

One potentially dramatic effect of a U.K. vote to leave the EU is the possible dissolution of the U.K. itself. Should the Brexit campaign succeed, there would be a strong push by Scots–who polls show favor staying in the EU–for a rerun of their 2014 independence referendum which failed 55 percent to 45 percent.

Freelance journalist Andy McSmith, a former columnist for The Independent, says Scots wouldn't be so divided in a second referendum.

"If the majority of the British public have voted to come out and the majority of the Scottish public have voted to stay in, it would actually guarantee that Nicola Sturgeon, the Scottish First Minister will be straight in front of Cameron saying that the English have no business taking the Scotts out of the EU," he says in an interview. "They would demand for another referendum and it would be quite difficult to say no.”

Scotland might not be the only part of the U.K. to reconsider its ties.

"The Scottish government has made it clear that they would call for another referendum, Northern Ireland was saying the same thing," says Ashitha Nagesh, a reporter for London's Metro newspaper. "Then [the U.K.] would just end up being England and Wales which is even more terrifying."

Oliver Norgrove, a campaigner for Vote Leave, says the position of Scotland's largest political party–opposed to political federation with London but in favor of federation with Brussels, is logically inconsistent. Supporters of keeping Scotland in the U.K. wave flags in 2014. Should the U.K. vote to leave the EU it might trigger a new Scottish independence vote. (AP Photo/Lefteris Pitarakis)

Unhappiness with high-levels of immigration is a key factor in driving support for the Leave campaign. Like other industrialized countries, working class Britons have been squeezed by the forces of technological change and globalization even as they've often had to compete for jobs with newcomers from poorer countries like Poland, Hungary and elsewhere in the EU's east. Migration Watch U.K., an advocacy group, says leaving the European Union could reduce net migration to the U.K. by 100,000 people a year.

The issue has exposed a divide in the Leave campaign. On the one side are those like Nigel Farage of the far-right U.K. Independence Party, who has risen to prominence by running strongly against immigration and the free movement of people inside the EU. On the other side of Leave are center-right Eurosceptics like Conservative London Mayor Boris Johnson, who want to leave the EU but are willing to accept a pact allowing free movement of people in exchange for a free trade agreement.

Yet even if the U.K. votes to leave and adopts the tough stance on borders promoted by Farage, it is unlikely to staunch all immigration.

"Leaving would only affect immigrants from the EU, from Poland and other places," says McSmith. "There are vast numbers of people that come over here [Britain] from Pakistan or the Caribbean Islands which obviously doesn't impact on them." Prime Minister David Cameron has been the leading voice for the U.K. to remain in the EU. (AP Photo/Virginia Mayo, File)

London is a global banking center, with over 250 foreign banks alone. Financial services are vastly important, accounting for 10 percent of the U.K. economy. Many economists say that leaving the EU is unlikely to help, and would likely harm the U.K. economy, regardless of what kind of separate trade deal it might negotiate with Brussels.

"You'd be hard pushed to find an economist who thinks that our economy will be stronger outside the European Union," says Emily Cadman, an economics reporter for the Financial Times, in an interview.

Others argue that a Brexit would do little damage. A report by the think tank Open Europe suggests that the worst case scenario for leaving would mean a 2.2 percent decline in GDP, and the best case would be growth of 1.6 percent.

Much would depend on the type of trade deal an independent U.K. negotiates with Brussels. Agreements with the EU by non-members Norway and Switzerland still leave those countries subject to many EU regulations. But the Leave campaign says the U.K. can go its own way.

"I am convinced that the U.K. can negotiate and mold its own unique relationship because we are more powerful," says Norgrove, of Vote Leave. "We are not a Norway, we are not a Switzerland."

Though much of the debate has focused on the surge of migrants into the U.K., an EU pullout will also have some effects for Britons traveling to continental Europe. Though its unlikely that countries like Spain and Italy that draw large numbers of sun-seeking Brits would want to impose travel barriers on U.K. tourists, moving about the continent may not be as easy after an EU pullout.

British citizens living and traveling inside the EU would likely lose access to health insurance coverage in some countries, says Sebastian Mallaby, a senior fellow at the Council on Foreign Relations.

Other smaller travel protections might also be at risk, like an October EU policy that abolishes roaming charges for mobile phones used anywhere in the EU. Previously British tourists often encountered "bill shock" when coming back from their holidays abroad.

“When it comes to data, most consumers are reticent and up to 80% switch off data roaming on their smartphones for fear of bill-shock” while traveling, writes Jennifer Kyriakakis, co-founder of Matrixx, a digital services company.

However a growing share of the publicly-financed research in the country is now funded through the European Union as the British government has cut back on science spending, says Stephen Curry a professor of structural biology at Imperial College London.

“When it comes to competing for funds within the EU, the U.K. is neck and neck with Germany for winning the most project grants and the most funding,” says Curry.

Curry says that funding will disappear if the Leave campaign succeeds, and it's not clear that the money the U.K. saves in payments to the EU would be diverted to cover scientific research at the same level–not least because the U.K. may end up still making some contributions to the EU budget, just as non-members Norway and Switzerland do. Other scientists have expressed concern they would be cut out of EU research networks.

But even among this group there is not consensus. Scientists for Britain, a group of researchers supporting Leave, argue that EU funding is a relatively small portion of overall spending on research and development in the U.K. The group argues that the research funding the U.K. receives back from the EU is just 2.3 percent of the U.K.'s annual payments to Brussels. "It’s not rocket science...to see that the UK could easily plug the funding gap in the event of Brexit," the group says on its website.