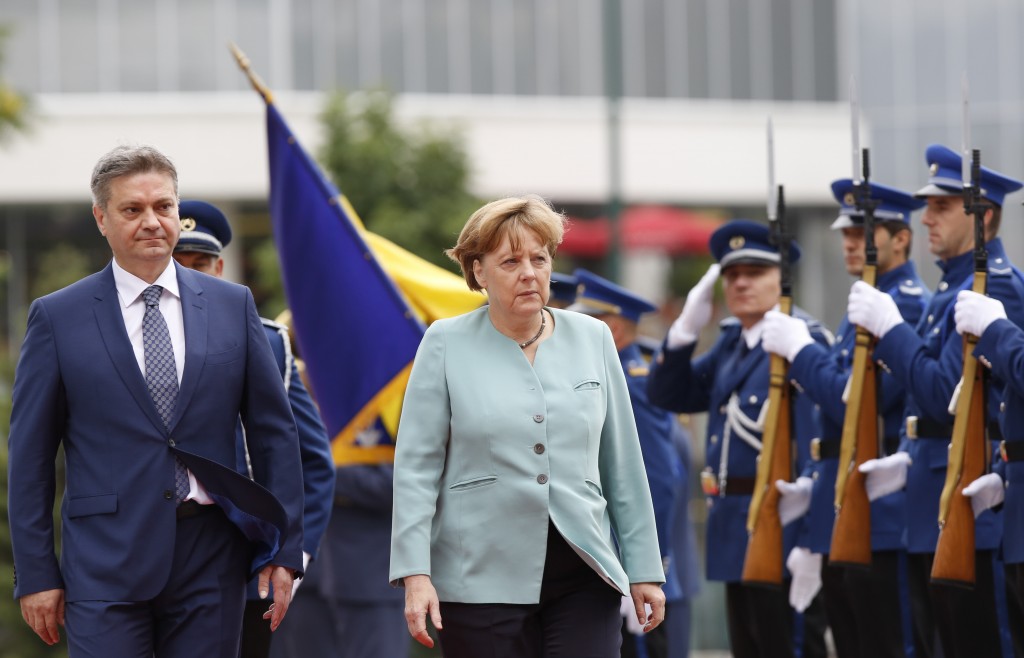 Bosnia-Herzegovina is among the poorest and most corrupt corners of Europe. The country made significant progress in rebuilding in the decade after its civil war ended in 1995. In the decade since, progress has stalled as the EU and the United States shifted their foreign priorities elsewhere.

But this year the country formally applied to join the European Union, an ambitious move for a nation still riven by ethnic divisions and where per capita income is one-tenth that of Germany. The application has drawn criticism from European diplomats who argue Bosnia isn't ready for the reforms needed to join the EU.

But among Bosnia's cheerleaders is Tanya Domi, a former U.S. State Department official who went to Bosnia right after the war to help implement the Dayton Peace Accords. Domi has worked on policy issues in the Balkans for a quarter-century and is now an adjunct professor of international and public affairs at Columbia University. She spoke with Global Journalist's Ines Kagubare about why the EU should forge ahead with Bosnia's application to join the club. Global Journalist: What are the biggest challenges Bosnia is facing?

Domi: What you are witnessing here in the Balkans is an economic depression or recession and it’s compounded with the fact that Europe itself took an austerity position towards the recession in 2008. You’re talking about a post-conflict country in Bosnia, and also talking about a political frozen conflict.

The unemployment rate in Bosnia is about 40 percent and almost 60 percent among the youth, according to the World Bank. We're talking about really incredible poverty, people being hungry, no jobs. If you are a young person, you really don't have much of a future. So in the past three years, we've seen a spike in social unrest.

GJ: Bosnia's government is divided along ethnic lines among Serbs, Croats and Bosniaks. How does this make it difficult to govern?

Domi: The Dayton Peace Accords was designed to stop a terrible war. What they did is they froze what we can relate to as Americans as segregation. In other words, they segregated ethnicities and they created what were two political entities. One [is] the federation which includes Sarajevo and the western Herzegovina and it includes the Croats and the Bosniaks. The other political entity is  the Republika of Srpska which is where the Serbs actually command political power.

The Dayton Peace Accords designed governments so that power is decentralized to these two political entities but it undercuts the power of the central government. At the parliamentary level, there has been blocking, obstruction, refusal to pass laws and to conduct the regular business of government.

The IMF has frozen loans to Bosnia-Herzegovina because one of the big issues, which is not unique to Bosnia,  is incredible, systemic corruption and a lack of transparency.

GJ: Bosnia recently submitted their application to join the EU. Is now the right time?

Domi: It’s better to have Bosnia in the EU accession process than not. If you are an EU accession candidate you have to engage in a series of reforms to all sectors of governance.

I would rather see engagement by the EU as a partner in pushing Bosnia to take these steps forward and to improve effectiveness in delivering services to constituents [such as] reinforcing the rule of law, carrying on the business of national human rights courts and engaging in transparency reforms so that we can get to the bottom of some of these corruption.

I don’t see how it would harm Bosnia, the question is [whether] the EU really serious about this. I really hope they are.

GJ: Russia has been a historical ally of the Serbs and there has been some tension between the EU and Russia recently as we've seen in Ukraine. What role is Russia playing in this?

Domi: I think Russia is a serious problem. Russia has a role in international organizations, including in the case of Bosnia-Herzegovina. They are members of the [Dayton Accords] Peace Implementation Council. But Russia has proven itself to be very problematic. They're the spoiler, they're the destabilizer. They are playing a very unconstructive role in the Western Balkans and in Bosnia specifically.

GJ: Given all the EU's problems now, including economic issues, is it worth it for Bosnia to join?

Domi: Bosnia has depression-level economic data. Despite the challenges that face Portugal, Italy, Greece and Spain, if you were Bosnian you would want to be in the EU for economic reasons. There will be lots of benefits that will come to Bosnia economically.