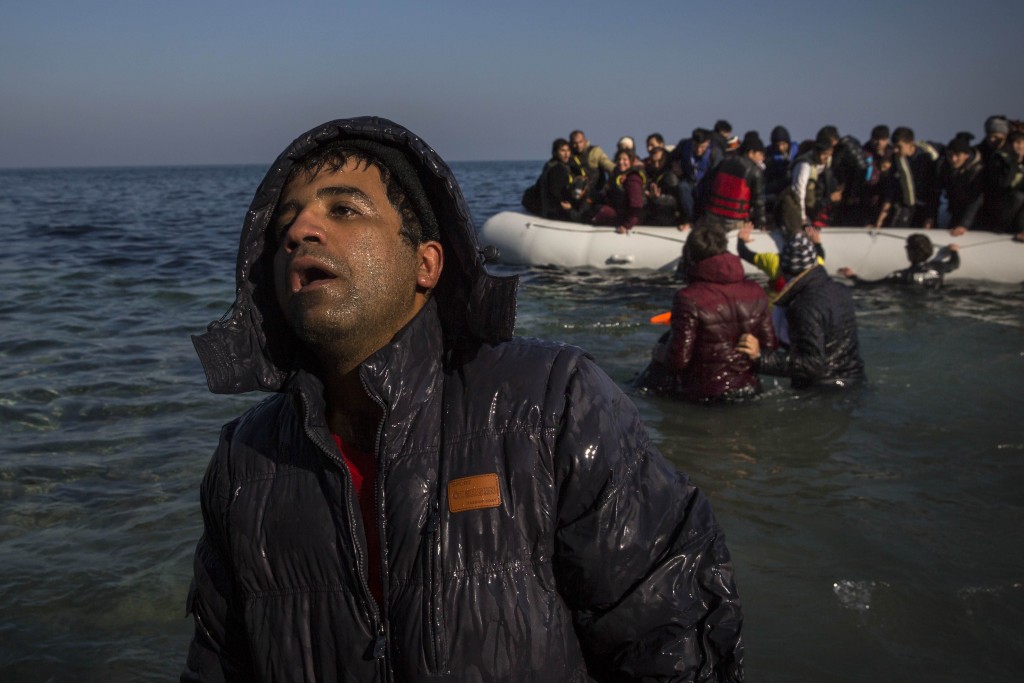 An exhausted man disembarks from a dinghy on a beach next to the town of Mytilene, after crossing a part of the Aegean sea from the Turkey's coast to the northeastern Greek island of Lesbos, on Dec. 6, 2015. (AP Photo/Santi Palacios)

"It's a situation that will change your life completely."

The paved road began to turn to gravel as the van carrying Rasha Abousalem neared the shores of the Greek island of Lesbos. Neither Abousalem, the director of humanitarian operations for a small Missouri-based aid agency called Global First Responder, nor the other aid workers and volunteers, were prepared for the scene ahead of them.

In recent years the shores of Lesbos, a Greek island just six miles (10 km) from the Turkish coast, would have been dotted by honeymooners and families on summer vacation in August. But last summer the shoreline was  a waste bin of rafts and life jackets left by migrants and refugees arriving from Turkey. In less than a day, the boxes of supplies Abousalem and other volunteers had spent months collecting from donors in the U.S. were cleaned out even as thousands of destitute refugees continued flooding the shores from Turkey.

“You have to understand that they’re not in their right state of mind a lot of these people are filled with trauma, PTSD and desperation,” says Abousalem.

Volunteers like Abousalem say the misery they saw on Lesbos in recent months changed them. Indeed a recent agreement between the European Union and Turkey to begin sending refugees back to Turkey from Greece was aimed at staunching the tide of desperate people arriving on the beaches of Lesbos and other Greek islands. Through March 19, the U.N.'s refugee agency reported 85,815 people had arrived by boat on the island in 2016 alone – a figure equivalent to its year-round population.

In a matter of weeks last year Abousalem, of Columbia, Mo., and a small group of volunteers raised thousands of dollars and collected 20 large boxes of supplies, including clothes, children's coloring books, food and medical kits. Abousalem left for Greece with four boxes of supplies and arrived in Athens in August– in time to witness the scenes of disorder caused by the mass movement of people to Europe from Syria, Afghanistan and other poor and violence-plagued places. An excavator works on a huge pile of life vests and dinghies at a local dump of the island of Lesbos, Sept. 24, 2015. (AP Photo/Petros Giannakouris)

She traveled to Greece's northern border with Macedonia, where some migrants had recently rioted after Macedonia barred entry to some migrants, and distributed supplies to people waiting at the frontier. (In November, there were news reports of migrants stitching their lips shut or trying to commit suicide after being barred entry to Macedonia.)

From Greece's northern border she traveled to the Aegean island of Lesbos and met up with other volunteers from Global First Responder.  There it was apparent there were not enough doctors, food or other resources for the thousands of new arrivals. Abousalem was surprised to discover how many refugees came from places other than war-torn Syria – indeed this year, more than half of the migrants arriving by sea in Greece are from countries other than Syria, including Afghanistan, Iraq and Pakistan.

At first glance, Abousalem was amazed at the organizational strategies at play behind the chaotic circumstances. The Greek government had what she deemed an “unofficial contract” to coordinate with refugee smugglers. The government's cooperation with the traffickers it was nominally trying to halt allowed them to organize distribution of resources like raincoats, bus tickets and even specific drop points for refugees on the island.

Much of the aid that was on Lesbos at the time came from small aid agencies like Global First Responder, rather than large, international organizations. Coordination with local authorities was often lacking, and volunteer aid workers were sometimes detained by the Greek coast guard. That happened to Abousalem on one occasion when she and a group of aid workers were detained for unspecified reasons after trying to help pull a stranded refugee ashore.

In Lesbos Abousalem was joined by other volunteers from the U.S. The group included Kansas City native Hussain Yusuf, a medical student and founder of a charity named African Youth Initiative. Getting to the island had been challenging: Greek hotels and car rental companies had refused Yusuf and his companions service, fearing they were refugees, Yusuf says. Hussain Yusuf and other aid workers at the Greece - Macedonia border. (Courtesy)

Further, the companies were afraid of renting to volunteer aid workers, having experienced refugees housed en masse in their rooms or cars returned to the rental agency covered in mud from being driven on the beach to pick up migrants.

Yusuf says his days on the island in October were spent like a firefighter. "

He'd be relayed a call about a boat in distress, put on his diving suit and dash from his hotel to the beach, where he would help the wounded struggle to shore and get treatment.

"It was like working in an emergency room outside," he says. "The boats coming in were like the ambulance."

Many refugees had festering wounds from their long migration through Turkey and then across the sea to Greece. Some had even been injured at sea–including refugees who reported that Turkey's coast guard had tried to sink their rafts or hit the refugees with electrically-charged poles. In their area of Lesbos, there were just two doctors and the nearest clinic was some 30 minutes away. A Yazidi refugee family from Iraq cries while resting on the seashore shortly after arriving on a vessel in Lesbos, Nov. 26, 2015. (AP Photo/Muhammed Muheisen)

"The wounds were like when you see it and you say, 'this needs amputation,' there's no way that's going to heal," says Yusuf. "The type of medical treatment was so bad, I didn't know what to do."

Yusuf left Lesbos in late October and returned again in November, when he was  witness to the aftermath of a tragedy.

On Oct. 28, just days before his arrival a boat carrying nearly 240 people capsized off of Lesbos, and 76 people drowned. The bodies washed up on shore for days, usually without any documents identifying them. Something had to be done with all the bodies. Many locals did not want refugees buried on the island, but there was little choice. The local mayor chose a plot of land, and Yusuf and 15 others dug graves for all 76 bodies.

"It's a situation that will change your life completely," Yusuf says of his time on Lesbos, which he left on Dec. 28. "Once you go there you immediately want to go back."