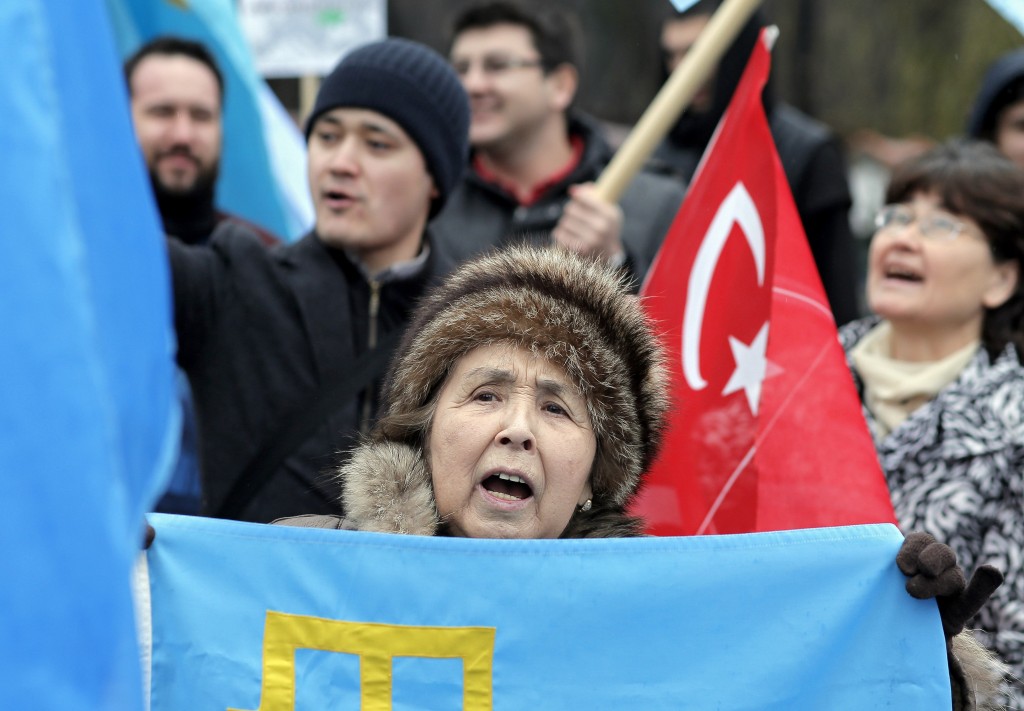 epa05183630 An ethnic Tatar woman from Romania shouts anti Russian slogans and waves a Tatar flag during a protest in support for the Crimean Tatar community that took place in front of the Russian Federation Embassy, in Bucharest, Romania, 27 February 2016. Tenth of ethnic Tatars from Constanta and Bucharest counties, organized by the Democratic Union of Turkish-Muslim Tartars in Romania, gathered near the Russian embassy headquarters to protest against the Russian administration in Crimea, accusing serious rights violations of the Tatar community living in Crimea. EPA/ROBERT GHEMENT

Police in Crimea have released a reporter for Radio Free Europe/Radio Liberty (RFE/RL) after detaining him as part of an investigation into the U.S.-sponsored news service in the peninsula annexed by Russia from Ukraine in 2014.

Nikolai Semena, who reported for RFE/RL's Crimea service Krym.Realii, was briefly detained April 19 and released on bail after security forces raided the homes of seven journalists for the news service, outlets including Voice of America said. Computers and documents were seized during the raids.

Semena is under investigation for "calls for undermining the Russian territorial integrity via mass media," RFE/RL said, citing a statement from Natalya Poklonskaya, Crimea's prosecutor-general. After Russia annexed Crimea in March 2014, it has become a criminal offense to question Crimea's status as a Russian territory. Poklonskaya said Semena had published articles supporting a trade boycott of Crimea backed by Ukrainian activists, according to VOA. If Semena is convicted, he could face up to five years in prison.

The move against Krym.Realii came shortly after the head of Russia's Central Investigative Committee, the country's main federal prosector, reportedly called for Russia to step-up Internet censorship in a manner similar to China.

In March 2015, Russian Security Forces raided the the homes of the parents of two journalists in Crimea. Natalya Kokorina and Anna Andriyevskaya both worked for the Center for Investigative Reporting. Kokorina was also detained for six hours and interrogated.