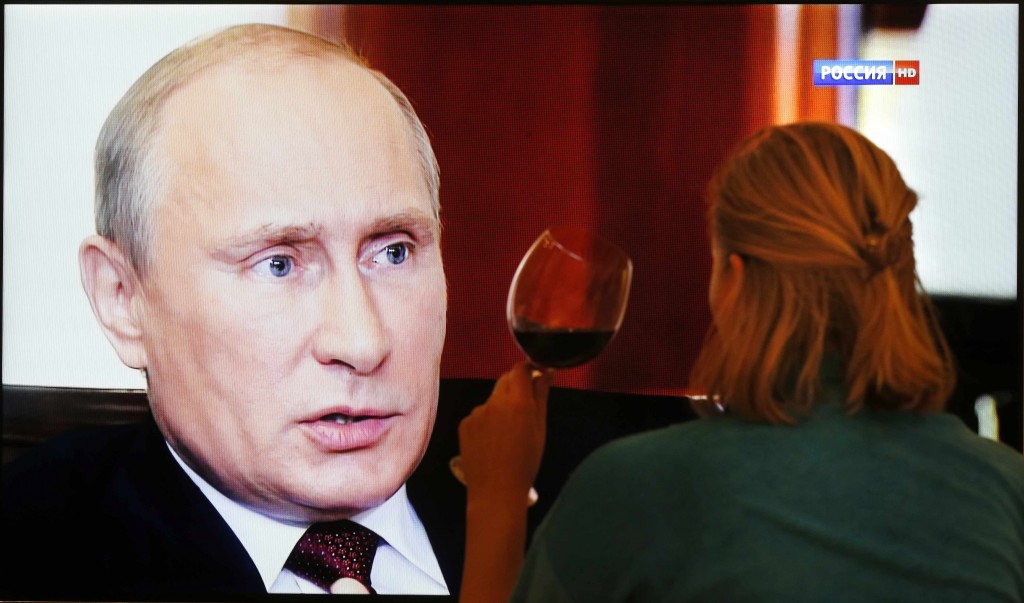 A Russian woman drinks wine watching the premiere of documentary 'Crimea. A way home' (also known as 'Crimea. Homeward bound') by Andrei Kondrashov aired on Russian state television in Moscow, March 15, 2015. In the documentary produced by Russian state television on the annexation of Crimea, Puitin stated it was his idea to bring Crimea back to Russia. (EPA/YURI KOCHETKOV)

The U.S. is a "colonial" power seeking to dominate Ukraine. A Dutch investigation of the downing of Malaysian Airlines Flight 17 over eastern Ukraine is "biased, low-quality, full of omissions." Al-Qaida is a "cat's paw" run by Western intelligence agencies. Such is the news if you follow Russian state-funded media outlets like Sputnik News or Russia Today.

Russia's official news media are doing more than just parroting propaganda about sensitive issues. They're part of a sophisticated "information war" with its roots in  Soviet psychological operations dating back decades, say two Russian media researchers who spoke to Global Journalist's Liying Qian. The first is Vasily Gatov, a former executive at Russia's state-owned RIA Novosti, and a visiting fellow at the University of Southern California's Annenberg Center on Communication Leadership and Policy. The second is Maria Snegovaya, a columnist for Vedomosti, a Russian business daily jointly owned by the Financial Times and Dow Jones.

Global Journalist: What do you mean when you talk about Russian information warfare?

Gatov: The information war is actually an attempt from Russian secret services or propaganda subdivisions to influence the Western meritocracy and mass media to leave Russia alone...to make them reconsider Russia [like the] Soviet Union to a certain extent, but a much more dangerous Soviet Union.

GJ: You've examined an idea called "reflexive control" when talking about Russia's strategy - whereby Russia does things to get a stronger adversary like the U.S. and NATO to choose a course advantageous to Russia by shaping perceptions to make it less clear who the aggressor is in Ukraine or what Russia's ultimate objectives are.

Snegovaya: The key of the information campaign is to influence your opponents, in this case the Western audience, into unknowingly making bad decisions by interfering with what their perceptions of reality are....The strategy is based on the four D approach, in which you either dismiss, distort, distract or dismay the available information... Vladimir Putin for example denied for several consecutive months the existence of Russian soldiers in occupied Crimea first and then Ukraine. Or an example of the "distort" approach would be the famous and notorious Russian actress who played the role of a witness [on Russian state television] who allegedly viewed a boy being crucified [by Ukrainian soldiers].

GJ: What role does Russian media play in this?

Gatov: When Putin came to power, two or three major TV channels were controlled by his adversaries. He spent the first four years of his tenure taking over those TV channels so that they at least wouldn't be against him...He started to manage them. Russia’s media system is a heavily managed system. It’s important to deliver not only the message but also the mood or emotion. The emotion is: “don’t get engaged with Russia. Russia is dangerous. The United States and the European Union are worse than Russia. They are evil.”

Most of Russian media coverage pretends that you can see [facts] from different angles, and they will look differently and mean different things. It's artificially corrupted to confuse the audience. The goal of this West-oriented propaganda is to make people question the traditional media narrative...not just the media narrative, but the general media reliability.

GJ: How has this strategy influenced perceptions of Russia and Russian media?

Snegovaya: In Ukraine, trust in the Russian media has gone down. Almost 60 percent of Ukrainians, including those in eastern Ukraine, have reduced their consumption of Russian information sources, like what Russian TV channels are communicating. In Germany, RT Deutsche does not have broadcast access because it’s not viewed as a reliable source. They’re only available online.