In Burundi conflict, radio stations a point of contention 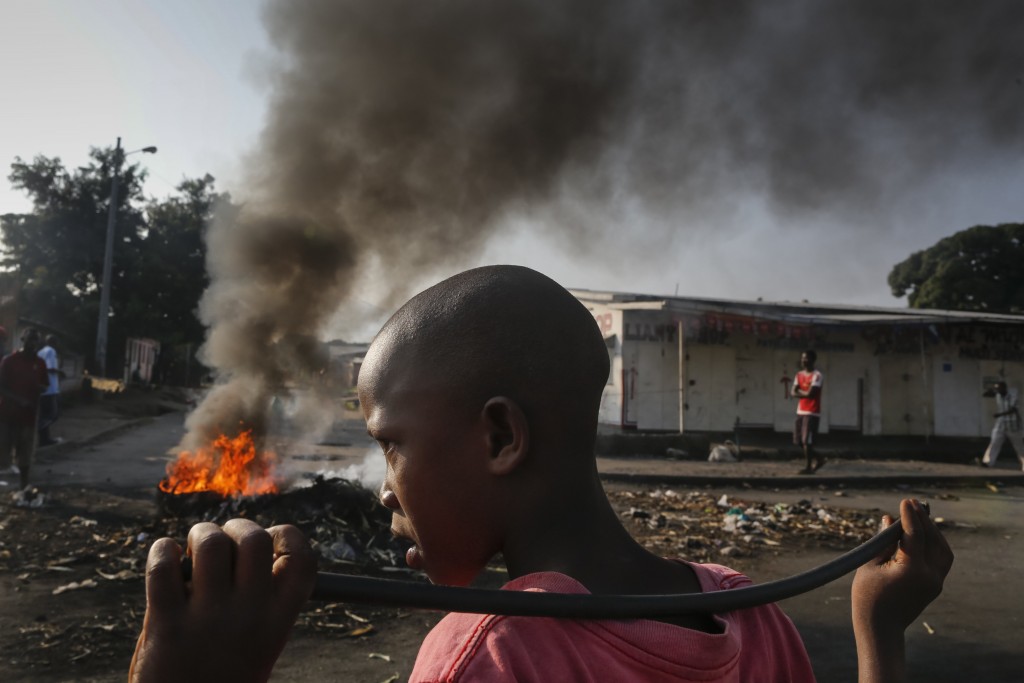 A Burundian boy looks on as he holds a stick in front of a burning barricade during an anti-government demonstration against President Pierre Nkurunziza's bid for a third term in Cibitoke neighborhood of Bujumbura, Burundi, May 29, 2015. EPA/Dai Kurokawa

The central African nation of Burundi has experienced unrest since the April announcement that President Pierre Nkurunziza was seeking a third, five-year term in office. The announcement led to abortive coup attempt and a boycott of July elections by the country's opposition, who say the constitution barred Nkurunziza from seeking a third term. That triggered a government crackdown on opposition supporters, and over the past year hundreds of people have been killed and an estimated 250,000 have fled their homes. In many countries, the Internet would have been a key communications platform for news coverage and discussion of such seismic events. But in Burundi, less than 2 percent of the population is online and most people get their news from the radio.

That influence has made Burundi's radio stations a focal point in the struggle over the country's future. Clea Kahn-Sriber, the head of the Africa desk at the press freedom group Reporters Without Borders, spoke with Global Journalist's Dorothy Sedovic about attacks on Burundian radio and the challenges to resolving the conflict. Below is an edited version of the interview.

Kahn-Sriber: When Nkurunziza decided to present himself for a third [term]...this sparked a lot of debate and some demonstrations. As a result of that, several radio [stations] were prevented from broadcasting outside of the capital city so as not to elicit unrest. On the 13th of May, some army officers put together a coup to overthrow what they deemed was now the illegitimate government.

The coup failed and in the process most independent and private radio stations were physically attacked by heavy weaponry and lots of them were destroyed. Ever since the 14th of May, all those radio stations were closed up. A lot of journalists fled the country because they were being threatened. It was basically a purge of any type of opposition to the president. The journalists  who are on the ground have found that it’s almost impossible to continue working.

Some of them try because despite the fact that the radio stations were not broadcasting, the websites of the stations continued to exist and so they tried to post information on the websites. But [they are] facing very difficult security conditions.

A lot of the directors of the stations that were closed also were [charged] with aiding and abetting the coup and were issued with arrest warrants. Those journalists, all they did was broadcast the news of the ongoing coup and sometimes tried to contact military people to verify information. So clearly they were just trying to do their jobs as journalists.

GJ: How have things changed recently?

Kahn-Sriber: On Feb. 19, the government allowed two radio stations to start broadcasting again. One was Rema FM, which is known to be close to the government.

Radio Isanganiro, which was one of the private radio statoins, also [was allowed] to reopen which came as quite a shock given the fact that they had to first sign what they called an "engagement act" with the government.

The terms [of the agreement] are not very well known and we don’t know to what extent it will actually be free and continue with independent reporting or if they’ve actually signed a pact with the devil. It was arbitrary that it was closed. It’s arbitrary that they were reopened and there is no legal guarantees that if they become displeasing to the government that at some point they might [not] be closed again. It was just a political decision.

There’s still a lot of division and mistrust between the journalists, which is not a good thing. Some French and British journalists have also been arrested, while they were just trying to report on the situation in the country. Overall there has been no real opening for more points of view since the shutdown of information in May 2015. A Burundian protester raises his leg as he and others face off with police officers, during an anti-government demonstration in Bujumbura, May 20, 2015. EPA/Dai Kurokawa

GJ: What has the reaction been of the international community?

Kahn-Sriber: The reaction was very timid. The African Union was not vocal about the situation and opinion was quite divided among different countries. One explanation could be that in several of the countries of the African Union, their presidents also have in mind [to do something similar to Nkurunziza]. So they might not be willing to condemn such behavior from their neighbor when they're planning to do the same thing themselves.

But as the conflict continued and as the situation degraded and as the number of refugees grew and the number of arbitrary killings and arrests [increased], there has been measures taken. The European Union suspended its assistance to Burundi...there was an attempt to send a mission of African peacekeepers but Burundi refused.

GJ: What are possible solutions to the conflict?

Kahn-Sriber: It seems very clear that the president will go through his five-year term. As of now, there is no option really to dismantle it. Of course the functioning of the media and the reopening of the media will be a condition for the establishment of a democracy in the future.