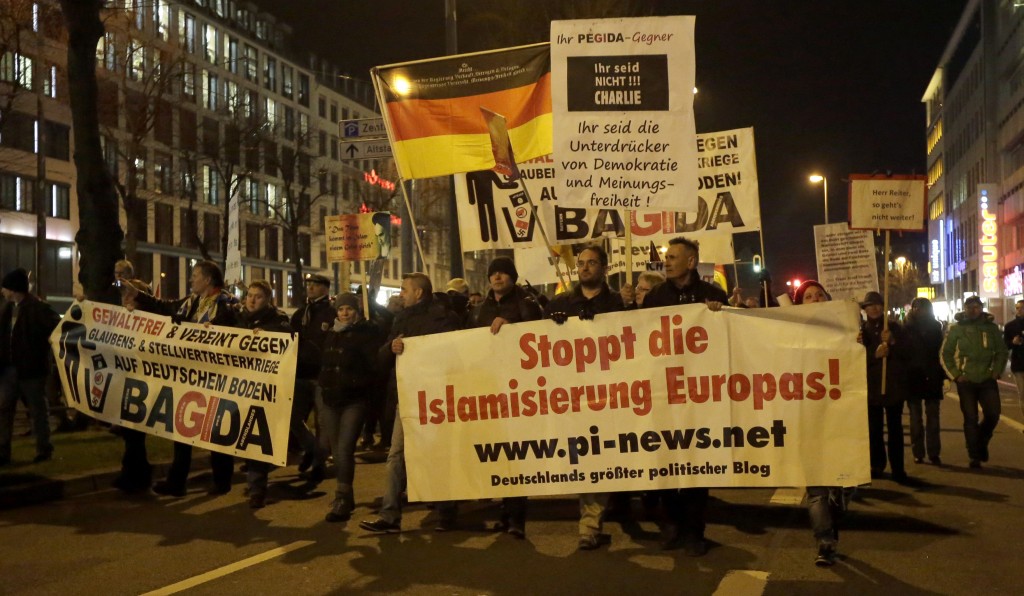 Participants of BAGIDA, the Bavarian section of the anti-immigration movement 'Patriotic Europeans against the Islamization of the West' (PEGIDA), gather in Munich, Germany, Jan. 19, 2015. The top banner reads: "You are the negative pressure of democracy, opinion and freedom," bottom, "Stop the Islamization of Europe." (AP Photo/Matthias Schrader)

The wave of refugees and migrants reaching Europe has led to political upheaval across the continent. With more than 1 million people arriving last year from Syria, Afghanistan and other countries, a backlash was likely inevitable. But terrorist attacks in Paris and reports of sex assaults by immigrants in Germany have fueled support for far-right political groups. In Germany, Michael Trammer, Munich-based photojournalist has been documenting clashes between the far-right anti-immigrant Patriotic Europeans against the Islamization of the West, or PEGIDA, and anti-fascist groups. His photos have have appeared in The Guardian, Xinhua, and other news sites as well as on his website, 24mm Journalism. Tranmer, 21, spoke with Global Journalist's Alex Derosier, about the rise of Pegida and the German public's reaction.

Global Journalist: When did anti-immigration protests start in Munich? How quickly did counter protests develop?

Trammer: In Munich, the first Pegida rally was held on January 12, 2015 after the Charlie Hebdo attacks. attacks. Not only Anti-Fascist (Antifa) groups but [also] a lot of Munich citizens got involved and got onto the streets in response. At the first rally there were roughly 1,500 participants with Pegida and approximately 10,000 to 12,000 counter-protesters in Munich. It was an immediate reaction from the citizens of the city. Of these 1,500 Pegida participants, there were quite a few radical Neo-Nazis.

GJ: Are anti-immigrant groups dominated by the far right?

Trammer: I think that the problem is that in the beginning, there were people who were in the political center that were joining Pegida out of fear or things they had read in the media. But the borders between what we call “worried citizens” and far-right fascists, especially in Munich, have completely fallen.

We see people that under the cover of "worried citizen[s]" join Pegida and march with them, at first preaching hatred against Islam and then eventually joining far-right neo-Nazi rallies. They’ll start participating in marches such as a neo-Nazi march in remembrance of Rudolf Hess [Adolf Hitler’s deputy Fuhrer]. GJ: Has there been violence between anti-fascist protesters and Pegida?

Trammer: Not really. There have been clashes at the Munich central train station after rallies. There was one case when neo-Nazis and hooligans who were leaving attacked a group of anti-fascists who were calling them out and telling them to leave. There is a video of this on Facebook published by a colleague of mine where you can see a neo-Nazi hooligan hitting a counter-protester in the face.

Things like that happen but at rallies themselves, the clashes are right-wing against police and police against left-wing. Sometimes neo-Nazis will try to attack left-wing protesters through the barricades that separate the groups.

GJ: What kind of risks have you faced as a photojournalist? Joining a Pegida march in Munich was far-right political figure Karl-Heinz Statzberger, who was previously convicted in a 2003 plot to bomb a synagogue (Michael Tranmer/24mm Journalism)

Trammer: For all of my colleagues covering neo Nazis marching, the groups try to find out personal information about journalists. I have a colleague in Munich who has been beaten very badly—to the point where he had to be brought to the hospital.

They have not gotten my personal address yet, but I am kind of worried that they will eventually find out where I live and beat me up or jump me. They know my first name, and they know who I am. I have not been publicly targeted.

About two months ago they started publishing my colleagues’ information but the police took down the Facebook page where they published addresses. There was also website called anti-anti-Fa88.com [88 stands for HH or Heil Hitler]. They started by focusing on publishing counter protesters’ info. Later Pegida would start equally targeting press and reporters. At least in Munich I have had that experience.

GJ: With more migrants expected to arrive in Europe this year, what are your concerns for the future?

Trammer: I think society in Germany is split, and in my eyes it will split further. There are people joining Pegida and rallying against immigrants and joining right-wing parties that are using Pegida hatred-preaching to gain voters. There are others that say we have to be humanitarian, that they [migrants] are running from war and we should take care of them and give them a chance to start a new life.

Some people are moving to the far right and because of our history, I think Germans should be very careful with taking a far-right approach like closing down all borders. There is a politician who says that it should be legal to shoot an immigrant when they are at the border. I’m worried that society will split up further and far-right extremism will rise more and more.

Correction: An earlier version of this article misspelled the subject's last name.