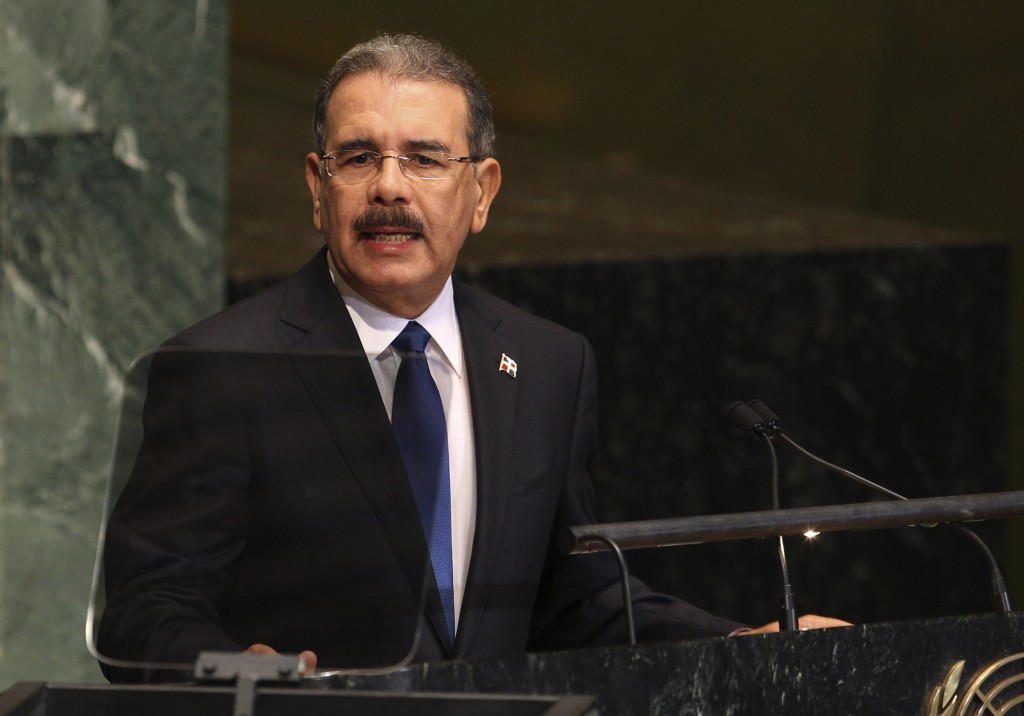 FILE - In this Sept. 25, 2012 file photo, Dominican Republic President Danilo Medina Sanchez speaks during the 67th session of the General Assembly at United Nations headquarters. Medina has urged legislators to decriminalize abortions if a woman's life is at risk or in cases of rape, incest or fetus malformation. The Dominican leader expressed his opinions in a letter sent late Friday, Nov. 28, 2014, to the leader of the Chamber of Deputies as he explained his reasons for vetoing a measure that would double prison sentences in abortion cases. (AP Photo/Seth Wenig, File)

The Dominican Republic’s constitutional court has overturned parts of a law that criminalized defamation of the Caribbean nation's government, but upheld the criminal prosecution for defamation of private individuals.

In a ruling issued Feb. 21, the court ruled that provisions of a 1962 law that imposed jail sentences for defamation of members of the legislature, security services or cabinet ministers violated rights to expression provided by the Inter-American Convention on Human Rights, the International Press Institute said.

The court did not strike down parts of the legal code providing jail sentences of up to six months for defamation of private individuals and up to a year in prison for those convicted of defaming President Danilo Medina, an ethnic or religious group, or a foreign official, the Committee to Protect Journalists said.

The ruling was in response to a February 2013 complaint filed by the Foundation for Press and Law, a Dominican advocacy group, and the editors of three local newspapers. In January 2012, a Dominican journalist, Johnny Alberto Salazar, was convicted of defaming a local lawyer and jailed for six months, according to CPJ. Salazar was also fined $26,000.

In its decision, the court also struck down a penalty system for defamation called "cascading liability." Under this system, an editor is held primarily responsible for a defamatory article. If the editor cannot be identified, liability is shifted respectively to the author, printer, vendor and distributor of a publication, according to CPJ.

Press freedom groups including the Inter-American Press Association offered praise for the ruling.

"We applaud the partial elimination of rules that made certain speaking about matters of public interest a criminal offense, which created a blanket of self-censorship in the media and among journalists, limiting the watchdog role of the press and thus the public's right to information," said Pierre Manigault, president of the IAPA and a South Carolina media executive, in a statement released by the group.