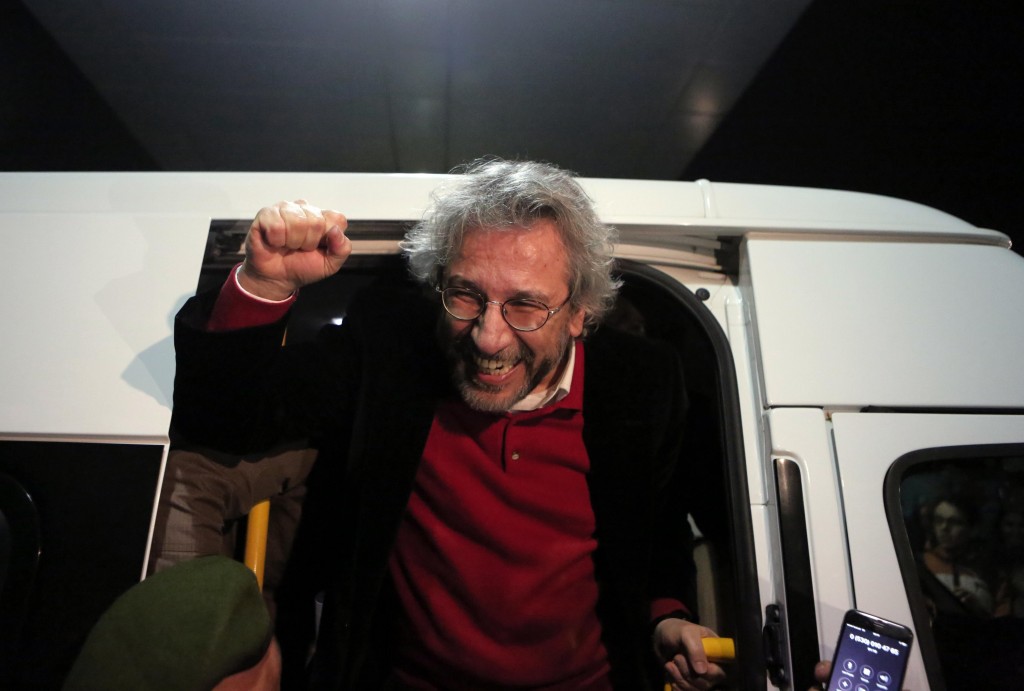 Can Dundar, the editor-in-chief of opposition newspaper Cumhuriyet, clenches his fist as he leaves a prison car the outside the Silivri prison near Istanbul, after their release, Feb. 26, 2016.(AP Photo/Can Erok)

Two Turkish journalists who reported that the country's government was arming Islamist rebels in Syria have been released from prison three months after their arrest on charges of espionage and aiding a terrorist organization.

Cumhuriyet newspaper’s editor-in-chief, Can Dündar, and Ankara bureau chief, Erdem Güwere, were released from prison Feb. 26, a day after the country's constitutional court ruled their right of free expression had been violated, outlets including Turkey's Hurriyet Daily News reported.

However, the charges against them have not been dropped and they both have been banned from traveling overseas. Their trial is scheduled to begin March 25 and they could face life in prison if convicted.

Dündar and Gül were charged with spying and terrorism because of the May 2015 publication of photos, videos and a report alleging Turkish intelligence officials had sent arms and ammunition to Islamist rebels in Syria in 2014. The November arrests came during a wave of journalist detentions and raids on media houses critical of President Recep Tayyip Erdogan and the ruling AKP Party in the weeks before and after Turkey's Nov. 1 elections.

Erdogan has acknowledged that trucks filmed carrying cargo in the Cumhuriyet report belonged to Turkey's National Intelligence Organization, but said that they were being used to send aid to ethnic Turkmen in Syria. Shortly after the publication of the report, Erdogan said the journalists would “pay a high price,” according to Hurriyet Daily.

Erdogan has criticized the constitutional court's decision. “I keep silent [on] the decision of the Constitutional Court but do not abide by the decision,” Erdogan said, speaking at a news conference at Ataturk International Airport, according to the Daily Sabah, a Turkish publication. “In my opinion, [the] media should not have unlimited freedom. There is no absolute freedom anywhere in the world media as well.”