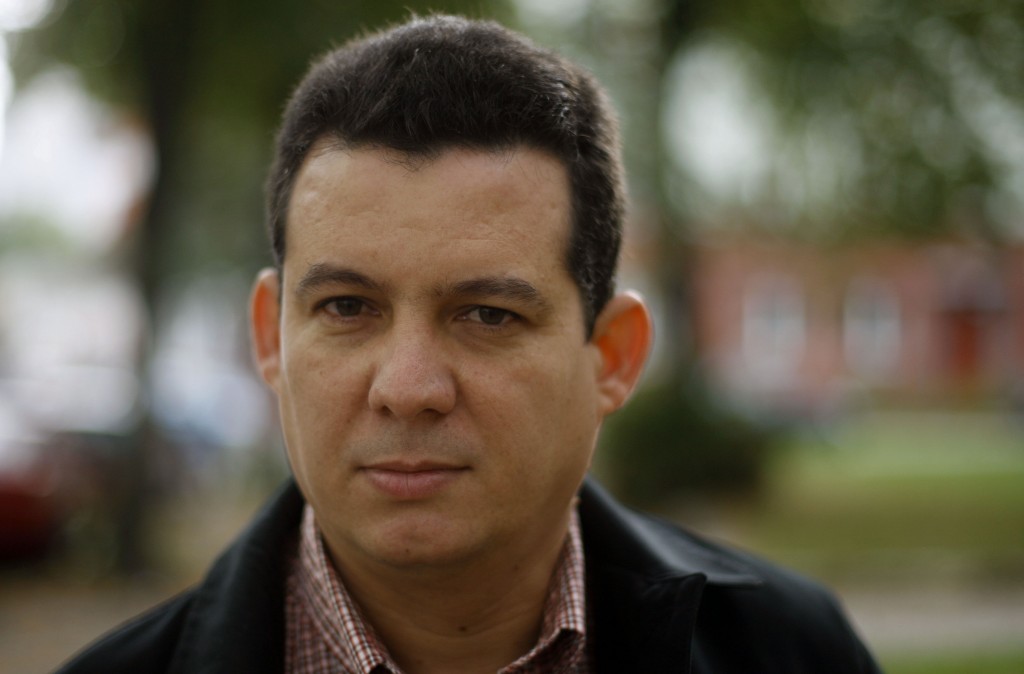 Author Amir Valle from Cuba poses for a photographer in front the apartment house where he lived in Berlin in 2006. 2006. (AP Photo/Markus Schreiber)

The minister "decided I was a rotten apple and rotten apples have to be set apart before they contaminate the rest."

Amir Valle was once a loyal son of the Cuban Revolution.

The Cuban novelist, editor and journalist was born in 1967 in Guantanamo Bay to a humble revolutionary family, just eight years after Fidel Castro's ragtag band of revolutionaries took power from pro-U.S. dictator Fulgencio Batista. Valle recalls his childhood as a time when the country was filled with sentiments of hope and certainty that a better future was being built by the Castros and their communist comrades.

Valle excelled in school and studied journalism at the University of Havana and served in the military. He then went to work for Cuban radio in 1989 at a time of momentous transition as Soviet aid that had propped up the economy began to vanish. He was assigned to cover the construction of a nuclear power plant and oil refinery that were the twin pillars of the government's plan to power the energy-starved island, and was shocked to see they were being built with nowhere near the speed the government had proclaimed.

Now 49, Valle's revolutionary optimism has vanished even as his career has flourished. He's won awards for his non-fiction work on the Israeli-Palestinian conflict and Havana's sex trade and his probing novels of Cuba's seedy underworld of drug dealers, transvestite prostitutes and human traffickers. Though he became one of Cuba's best-known writers, in 2005 he found his government no longer wanted him. While on tour to promote a book in Spain, he learned the government wouldn't allow him to return to his native land. Now living in Germany, Valle spoke with Global Journalist's Nicole Osuna about losing his revolutionary fervor and the contradictions of Cuban life.

Valle: Many people saw the Cuban Revolution as a beacon of freedom and hope in a time when the world seem to be crumbling. That ideal existed especially among young individuals. The propaganda of the revolution told us that we were going to be the kind of man Fidel Castro and Che Guevara were talking about, the “new man.” I wasn’t able to see the dark side of the revolution like other children since my parents shared its ideals.

My father still remains very proud he helped the revolutionary cause. But he did tell me that he fought so that I would be able to do what I believed in even if it was contrary to his beliefs. His words had profound meaning to me. My process of disillusionment with the revolution started when I began studying journalism. I noticed there were boundaries I was forced to follow and topics that as a journalist I didn’t have the right to cover. This opened my eyes. GJ: What kind of pressure is there on Cuban journalists?

Valle: The first thing you are told when you begin journalism studies in Cuba is that you are an ideological soldier of the revolution. When you graduate, you are placed in different media outlets, which have a set of “unbreakable guidelines.”

These guidelines establish what can or cannot be said, who you are allowed to interview, which topics are important to cover, etc. The rules are dictated by the Central Committee of the party’s Department of Ideology.

If you are a good journalist you try to find ways to tell the reality but generally journalists don’t want to risk it and end up doing very shallow journalism. But I have talented friends that decided to abandon the profession and end up working, for instance as taxi drivers, because they were unwilling to submit.

GJ: You helped write the script for Estela Bravo's flattering 2001 documentary "Fidel: the Untold Story." What did you learn from that experience?

Valle: That was another key moment for me. In the making of the documentary, we got to see many private images and clips of Fidel Castro that I had never seen. The standard of living I saw through those images had nothing to do with how the rest of the Cuban population was living. The level of luxury was very shocking to me. Images of him with his family reminded me more of an Arab sheikh, an oil multimillionaire, than of a revolutionary leader that everyday asked the masses for more sacrifices. For a long time, I thought —the same as many Cubans— that if Fidel ever found out about the wrong things happening on the island, these things would cease to exist. I thought that the problem resided in party middle men that weren’t doing their work adequately. But in the making of the documentary, I realized that Fidel was already aware of all of those things and that he was as guilty as the failed system.

GJ: Your investigation into prostitution "Habana Babilonia" is an underground bestseller in Cuba. How did you come to write it?

Valle: That was one of my proudest moments because with that book, I became known to all Cubans, not just the cultural elite.

The book  took five years of investigation into the people involved in the world of prostitution. I submitted the book to the Casa de las Américas [a Latin American literature prize] contest, and after it ended and I went to pick up my copies I noticed that one was missing.

Months later I found out that someone had photocopied my work and published it in the Intranet—the web that works only within Cuba. The book soon went viral. Along with the book, my contact information was also published so I started receiving emails, letters and phone calls from people that read the book clandestinely. The popularity of the book reached its high point after Fidel criticized it by saying that it talked about a non-existent reality on the island.

GJ: You weren't thrown out of the country but you were banned from coming back to it during a trip to Europe. How did you reunite with your family? Valle: I always say that I wasn’t exiled, I was banned from entering my country. I found out from friends on the island  that the then minister of culture, today an adviser to Raul Castro, decided that I was a “rotten apple”and that rotten apples had to be pulled apart before they contaminated the rest. Since I was a very well-known figure in Cuba, an arrest would have been  scandalous. So they let me out of the country in October 2005 to present my latest book in Spain. When I tried to return I was told I had lost the right to do so.

I spent about a year demanding my right to return to my country. I was supported by journalists from many international media outlets like the BBC and [Spanish news agency] EFE. Seeing that they weren’t going to allow me to do so, I asked the government to let my two children out of the country. The answer was negative.

So I decided to write a letter to internationally well-known journalists and writers who supported the revolution, but were my friends like Gabriel García Márquez and José Saramago. I explained what happened to me and told them that I would make sure I caused an international intellectual scandal if I didn’t get my children back. My little boy got out thanks to the direct pressure exerted by Gabriel Garcia Márquez.

GJ: Do you see yourself returning to Cuba?

Valle: Five years after my banishment, the government sent a friend of mine who worked in a Cuban embassy in a European country to talk to me. He told me that if I remained silent and stopped being so critical about Cuban life and the government, they would consider the possibility of allowing me back to the island.

At that time, I already had managed to get my two children out of Cuba and my family was already  settled in German society. I told them that I was too old to have to deal with their pressures and that I would go back to Cuba when I am able to just like any other citizen in the world – buy a plane ticket and enter and exit the country without a problem.