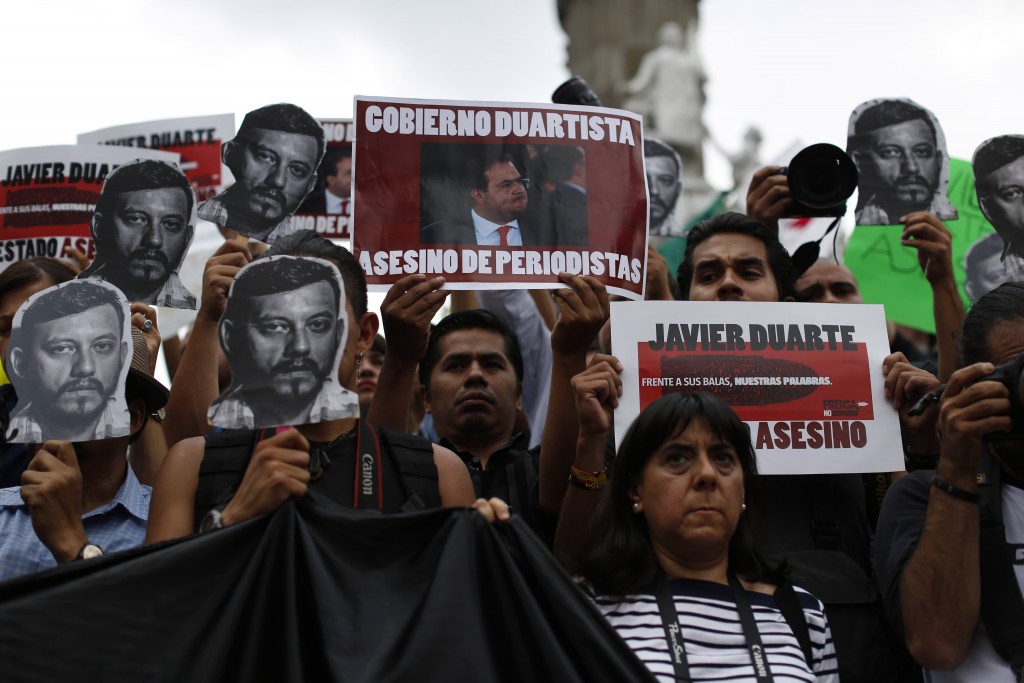 Journalists and activists hold up cut-out images of slain photojournalist Ruben Espinosa during a protest at MexicoCity's Angel of the Independence monument, Sunday, Aug. 2, 2015. Mexico City officials said Sunday they are pursuing all lines of investigation into the killing Espinosa and four other women whose bodies were found in the capital, where he had fled from the state of Veracruz because of harassment. According to the Committee to Protect Journalists, 11 journalists have been killed there since 2010, all during the administration of Gov. Javier Duarte. The signs held by the protesters read in Spanish "Duarte Government, Murderer of Journalists" and "Javier Duarte, Assassin State." (AP Photo/Dario Lopez-Mills)

The governor of Mexico's Veracruz state has blamed a jailed leader of the Zetas cartel for the recent abduction and killing of a local journalist who covered crime.

Governor Javier Duarte said via Twitter that regional Zetas cartel boss Josele Marquéz, also known as El Chichi, was the "intellectual author of the assassination" of Anabel Flores, a reporter for the newspaper El Sol de Orizaba whose body was found bound and partially unclothed Feb. 9 in the neighboring state of Puebla. Flores, 32, died from suffocation and was found with a plastic bag pulled over her head, NBC News said.

Marquéz was arrested Feb. 2 on other charges in the city of Cordoba, the Spanish news agency EFE said. Duarte also linked Marquéz to a 2011 attack on the newspaper El Buen Tono that was caught on security cameras.

Salazar was taken from her home at around 2 a.m. on Feb. 8 by a group of at least eight armed men claiming to have a warrant for her arrest, according to the Committee to Protect Journalists. The men dressed in military-like uniforms, pointed weapons at Salazar’s family and forced her into one of three trucks. She had reported on a number of murders, including the recent shooting death of a shopkeeper, the New York-based press freedom group said, citing Mexican news reports.

Since Duarte became governor of Mexico's eastern Veracruz state in 2010, at least 15 journalists have been killed and three are still missing, NBC News reported. Duarte's administration is "incapable and unwilling" to prosecute crimes against journalists,  Carlos Lauría, CPJ's senior program coordinator for the Americas, said in a statement.

Reporters Without Borders ranks Mexico 148th out of 180 on its 2015 Press Freedom Index.