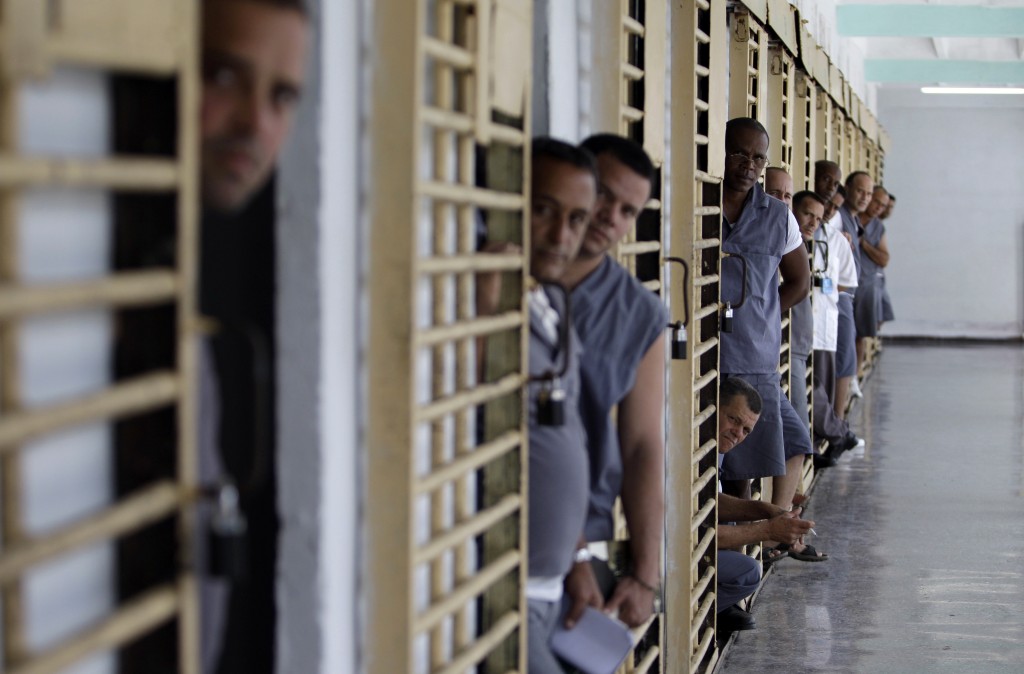 Prisoners look at military guards after returning to their cells at the Combinado del Este prison during a media tour in Havana, Cuba,, April 9, 2013. (AP Photo/Franklin Reyes)

Years after their release, two Cuban journalists look back at lost years.

In March 2003 the world’s attention was transfixed on Iraq as the United States prepared to launch a divisive military assault on Saddam Hussein’s government. Meanwhile just 90 miles from U.S. shores, Cuban President Fidel Castro seized the opportunity to launch an assault of his own on internal critics–an offensive that drew little attention from an international community focused on the  prospect of war in the Middle East.

On April 2, as U.S. forces neared Baghdad, Cuban reporter and photojournalist Omar Rodríguez Saludes returned to his home in Havana late. There his family had gathered to wait for him. They told him the police had come looking for him. The next day, as he was leaving for work, he was detained and placed under house arrest. The police searched his home, finding a 2002 New York Times' article highlighting his work as one of about 100 independent journalists working in the Communist nation. "I remember they shouted with surprise: 'Look at this!" says Rodríguez. "For them that was as if they found a bomb." Rodríguez was one of 75 journalists, human rights activists and political dissidents arrested in a sweep that became known as Cuba's "Black Spring." For Rodríguez and others rounded-up, the arrest was a life-changing event. All would languish in prison for years after show-trials on charges of undermining the government.  "This is following Sept. 11th, the world is focused on the U.S. intervention in Iraq," says Ted Henken, a Latin American studies researcher at Baruch College in New York. "The suspicion is that it was done because no one was paying attention."

Rodríguez, a former shipyard worker who loved photography, was recruited into journalism in the early 1990s by Raúl Rivero, a poet and former correspondent for Cuban state media who broke with the regime in the late 1980s and became a leader of Cuba's fledgling independent press. Rodríguez would walk and bicycle about the countryside taking pictures "trying to show the contrast between the government's narrative and the real destruction" of Cuba's economy and political freedoms.

Since independent news media is banned inside Cuba and Internet access is a luxury for the rich even today, Rodríguez's news agency, Nueva Prensa Cubana, mainly distributed his photos and reports to a U.S. audience of Cuban exiles. "Our job was to show our reality to the outside world," he says.

Rodríguez also worked with Radio Martí, a Florida-based radio network financed by the U.S. government that is often jammed inside Cuba. Relaying reports to the U.S. wasn't easy. "We recorded our information and sent it by telephone to Miami," he says. Getting access to a telephone at the time was "like finding a drop of water in the middle of the desert."

But in spite of working for media outlets critical of the Castro government, it may have been Rodríguez's work on a petition drive demanding greater human rights in Cuba that led to his arrest. That effort, known as the Varela Project, was a petition drive led by dissident Oswaldo Paya that collected 11,000 signatures in a demand for a referendum on democratic freedoms, including freedom of speech and the release of political prisoners.

The petition was presented to Cuba's national assembly in May 2002. But instead of spurring change, it led to incarceration for those who circulated the petition. Ten months later, Rodríguez and dozens of others who gathered signatures for the Varela Project were in prison. Alejandro Gonzalez Raga speaks during a press conference in Madrid in 2008 after his release. (AP Photo/Daniel Ochoa de Olza)

Among those jailed at the same time as Rodríguez was Alejandro Gonzaléz Raga. Gonzaléz, who grew up in the central provincial city of Camagüey, had been a rebellious child. His mother was a senior official in the local office of Cuba's interior ministry, but Gonzaléz frequently skipped school and hid from her when she came looking. "I was always the type of kid who did whatever he felt like," he says, in an interview with Global Journalist. "I never let anyone burden my freedom."

Gonzaléz went on to help found the Camagüeyan Press Agency, an independent news outlet, and reported on "things that needed to be published," he says. His memories of his 2003 arrest are still fresh. "They put me into a police car and never told me why I was arrested until three days later," he says. "My wife later told me that they went through our house with dogs, inspecting it as if I was a drug dealer."

His sudden detention was wrenching, and after a trial, he was sentenced to 14 years in prison. "You never forget your first day in prison," he says. "I was in a dark cell with no light and I was the only one in my section that hadn't murdered someone."

Life was difficult for the families of both men while they were in prison. During his hearings, Rodríguez, was barred from talking to his lawyer outside the courtroom and at one point, fainted from low blood sugar, according to a U.S. lawsuit filed against the Cuban government by his family. His son told the Committee to Protect Journalists in 2008 that he had been blacklisted from government jobs in Cuba. "Having a dad in prison is my crime," 19-year-old Osmany told the New York-based press group, at the time. Rodríguez was repeatedly transferred from prison to prison in different parts of the island–at one point his family had to travel 528 miles (850 kilometers) over two days to make a two-hour visit.

In one prison, in Camagüey, Rodríguez was kept in solitary confinement for weeks. In another he shared an overcrowded cell with 16 other prisoners, the only light coming from a single bulb in a nearby hallway, according to his family's lawsuit. He was beaten, and pestered by rats and insects.  He suffered from a liver ailment and a kidney infection and did not receive adequate medical care.

González too was shifted from prison to prison across the island, straining his connections with his family. “I was in three different prisons more than 100 kilometers away from my home,” Gonzalez says. “Family visits were limited to every 90 days. Lots of couples ended breaking up as they couldn’t cope with the situation.

For both men, the end of the ordeal began with separate phone calls from Cardinal Jaime Ortega, the top Roman Catholic official in Cuba, who had worked with the Spanish government to broker their release. The choice Ortega offered: exile in Spain with their families, or remaining in prison and allowing their families to live in Cuba. Omar Rodríguez, center left, holds up a small Cuban flag with a newspaper clipping reading "Ideas Don't Kill" as he poses with five of nine Cuban dissidents who were released from jail in Cuba and five female supporters a news conference in Madrid, July 15, 2010. (AP Photo/Paul White)

For Gonzaléz, the call came in 2008, five years after his arrest–and just months after Spain announced it would reestablish some aid programs with Cuba halted after the Black Spring.  Along with two other dissidents and their families, he boarded a Spanish air force plane and left. "They took my picture, gave me a passport, and the next day the Spanish government put us on a plane," he says. Alan Gross poses for a portrait in his home in Washington. Gross spent five years in a Cuban prison. (AP Photo/Jacquelyn Martin)

Rodríguez's call came in 2010, after he'd been in prison for seven years. "My intention wasn't to leave Cuba, and they [the Cuban government] knew that," says Rodríguez.

The timing, he now believes, was connected to Cuba's arrest in late 2009 of Alan Gross, a U.S. contractor for the U.S. Agency for International Development whom Cuba accused of attempting to undermine the government. With Gross behind bars in Cuba, the Castros had a new bargaining chip in their effort to gain the release of five Cuban intelligence agents convicted and imprisoned in the U.S. since the late 1990s–making the Black Spring prisoners superfluous. (Gross and the Cuban 5 were released in December 2014 after the two countries announced a plan to reestablish diplomatic ties). The whole detention, Rodríguez says, was a "mafia action to trade us" for the Cuban spies in prison in the U.S.

"When we got to the plane, the whole cabin crew was waiting for us," says Rodríguez, of his Air Europa flight out of the country. "I remember how the captain said: 'Welcome to democracy and Spain,' and then hugged me. It was a very emotional moment." Still, exile from their homeland has been difficult for both men, neither of whom is still still a journalist. Both Gonzaléz and Rodríguez received government welfare payments for two years after they moved to Spain. Gonzaléz went on to found an activist group, the Cuban Human Rights Observatory in Madrid. But his three children, all in their 20s, struggled to find work without proper permits. In a 2010 news article, he publicly criticized the Spanish government, saying it had "ignored" the needs of exile families.

Rodríguez also had difficulty finding work, and eventually left Madrid for northern Spain where he went to a trade school before emigrating to the United States. Today he works for a metal construction company in Houston. He still hopes to return to Cuba one day. "But not how it is now, things would have to change," he says.

Nor has his view been softened by Cuba's rapprochement with the United States last year. "Obama gave a handshake to a man who with the same hand signs death sentences," Rodríguez says. "That's something very, very hard for me to understand."

Correction: Due to an editing error, an earlier version of this article reported Omar Rodríguez was arrested April 2, 2003. He was arrested on the morning of April 3, 2003. It also incorrectly said he worked for Radio Martí. In fact, he had only worked collaboratively with the U.S.-based broadcaster.