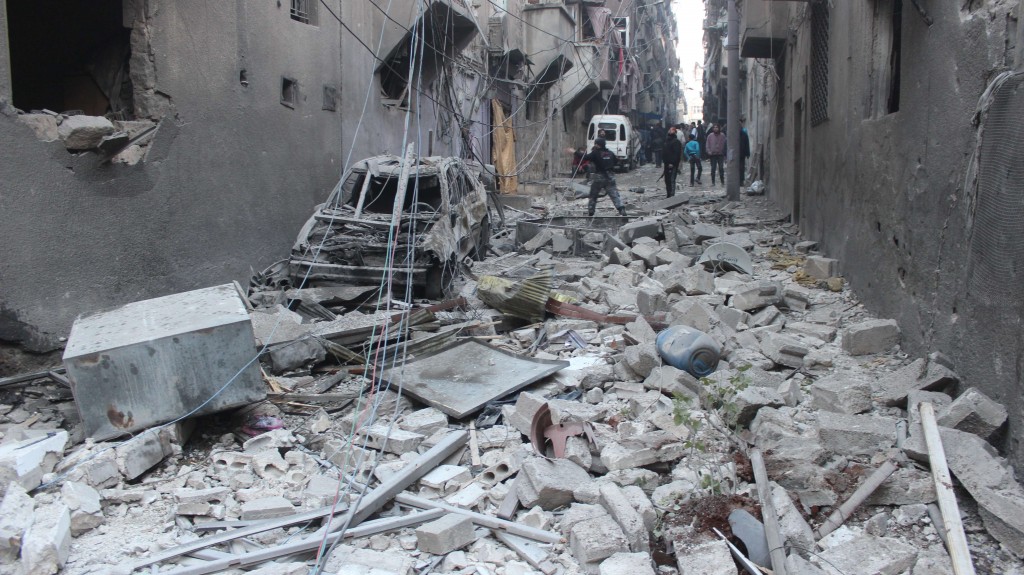 Much of Syria has become a no-go zone for foreign correspondents, leaving locals to fill the void.

Malek Blacktoviche was once a Java software programmer in Aleppo, Syria's commercial capital and largest city. As anti-government protests against the President Bashar Assad swept across the country in 2011, one day a friend asked Blacktoviche to go and film a street demonstration against the government – which had tightly restricted coverage of the uprising in state media. Blacktoviche, thrilled by the protests, agreed. He took his Android smartphone, pressed record, and felt a new sense of purpose.

“When I came back to work, I uploaded the video," says Blacktoviche, who uses a pseudonym for safety reasons, in an interview from Syria with Global Journalist. "I was so happy. I did something great.”

Blacktoviche was just one of thousands of ordinary Syrians who raised their smartphones and took to social media to document a conflict that otherwise might have been hidden from the world. Assad's state-media ignored the protests or described opponents of the government as "terrorists." Foreign journalists were barred from covering demonstrations and faced imprisonment or worse for trying to cover them.

Soon after covering his first demonstration, Blacktoviche began taking periodic one-hour breaks from work to go and film protests. In 2012, as the conflict escalated and Aleppo became a battlefield, others took up arms but Blacktoviche quit his job and dedicated himself to covering the conflict.

“My role was holding camera and documenting all what [was] happening,” he says.

That wasn't without risks. He was showered by bullets in firefights. In 2012 he was arrested by the Shabiha, the notorious pro-Assad militia, and was tortured and held for days at Aleppo Central Prison. Still, he continued.

“I couldn't go to protests for ten days," says Blacktoviche. "But after then, I felt powerful again."

He was determined to document Syria's destruction, convinced that it would help end Assad's regime. In 2013, Blacktoviche partnered with three other citizen journalists to create the Hadath Media Center, a multimedia site that aggregated photos and videos of the war from volunteers. Making a living was difficult, as their work was distributed free of charge. Blacktoviche opened a café and began trading in livestock to support himself.

The project came to an abrupt halt less than a year after it began when two of Hadath Media Center's offices were hit by barrel bombs dropped by Assad's military. “We could not afford the cost of the new [equipment],” says Blacktoviche. “Also as we were not getting paid for our work, we couldn’t carry on because we need[ed] money.”

Barrel bombs may have ended HMC, but other citizen journalism distribution channels have bloomed. Among them is the opposition Local Coordination Committees of Syria, or LCCSy. The group is a network of 70 reporting groups that organize events and distribute news including maintaining a database of those killed during the war. The group relies heavily on activists in their 20s to document attacks and provides a 24-hour reporting system of events.

Among the group's achievements was posting a 2012 video from the Damascus suburb of Daraya that appeared to show dozens of victims of a massacre by pro-Assad forces after the town was recaptured from rebels.

LCCSy draws inspiration from a massacre by government forces decades earlier. In 1982 during the reign of Bashar Assad's father Hafez Assad, Sunni Muslims in the western city of Hama rose against the Alawite-dominated government. Government forces destroyed the city in response, killing an estimated 20,000 people. But in an age without the internet or social media, there was little documentation of the disaster.

“The concept is that we will never again allow an uprising to be silenced and have nobody know anything about it,” says Rafif Jouejati, LCCS’s Washington, D.C.-based spokeswoman, who also contributes ideas for civil society development in Syria. “We want to make sure that people will hear it.”

Credibility is a major challenge for citizen journalism groups, and the Syrian government has sought to undermine the reports by declaring them fakes or propaganda. LCCSy tries to ensure that reports of major events are covered accurately by verifying facts with at least three different sources.

“We try to get corroboration from as many sources as possible,” said Jouejati. “In fact, LCC tends to underreport because we haven’t been able to 100 percent validate everything. And that’s why the death tolls we track are lower than what’s commonly accepted.”

Verifying reports from citizen journalists is also key for mainstream reporters, many of whom are hundreds of miles from the fighting and unable to witness events with their own eyes. Oliver Holmes, a Bangkok-based correspondent for Reuters who previously covered the conflict from Syria and Lebanon, says reporters have to "judge each source by its merits."

That includes evaluating the political agenda of a given citizen journalist, whether there are videos or photographic evidence to support a given report, and whether it can be verified with other independent witnesses. "Some citizen journalists are in fact activists with a political bias," says Holmes. "That should be made clear." And the risks are quite high. Citizen journalists operate without the protections afforded by major news organizations. A recent report from the Pew Research Center analyzing data from the press freedom group Reporters Without Borders found that from 2011 to 2013, 65 citizen journalists were killed in Syria. That's compared with 24 professional journalists over the same time period.

Still despite the risks and lack of compensation, the phenomenon seems certain to continue. "For 50 years...media was so false," says Blacktoviche. “Using our mobile phones and cameras we could show the ugly truth of this dictator and we were able to convey our voice to the whole world.”