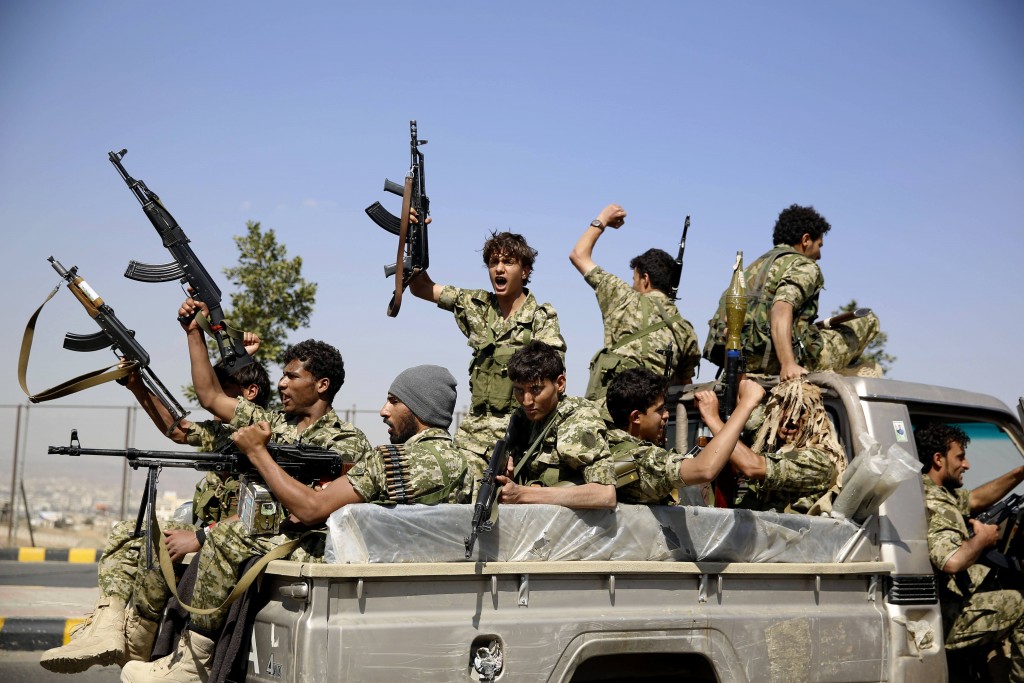 Shiite fighters, known as Houthis, ride on a patrol truck as they chant slogans during a tribal gathering showing support for the Houthi movement in Sanaa, Yemen, (AP Photo/Hani Mohammed)

A primer on Yemen's conflict

Yemen's year-old civil war has left more than 6,000 dead, 30,000 injured and 2.5 million forced from their homes. Yet outside the region, there is little news coverage of Yemen's war – despite some worrying trends.

As Iranian-backed Houthi rebels have battled Saudi-backed forces loyal to Yemen's government, extremists from the Islamic State (ISIL) and al-Qaida have expanded their control of territory in the impoverished country. Recent peace talks in Geneva failed, with neither the Houthis nor the Saudis showing any interest in a negotiated settlement.

As Yemen's humanitarian situation worsens, Global Journalist's Iuliia Alieva spoke with three experts on the country about religious tensions, the humanitarian crisis and restrictions on the press. Below, their edited answers to five key questions::

Global Journalist: What are the reasons for the conflict in Yemen? There are three dimensions of this conflict: local, regional and global. Yemen is the Middle East in miniature.

The country is suffering from terrific poverty with great numbers of uneducated yet politically active youth, which seriously fuels social unrest.  Yemen is [also] a tight knot of inter-tribal conflicts.

The regional facet spins around the internal Sunni-Shia divide, and is fueled by regional powers Iran and Saudi Arabia. Russia, which tends to ally with Iran's regional agenda, and the United States [Saudi Arabia's ally] have influence, though not so much as in the case of Syria.

GJ: What's the outcome of the failed peace talks in December between the Houthis and the Saudi-backed government?

Hisham al-Omeisy, Yemen-based political analyst and blogger: ...The warring parties brought to the table in Geneva were not willing to compromise nor did [they] represent all the faction son the ground to begin with.

The Saudi-led coalition has repeatedly made it very clear that they are seeking a decisive military victory, while the other side  refused to make any concessions and continues to fight with its back to the wall...Now that the peace talks have been derailed and basically postponed indefinitely, we are left with an extended war with each party aggressively pursuing its own goals militarily and trying to reinforce [its] position on the ground. Unfortunately, with the whole nation being held hostage to the conflict, a humanitarian catastrophe was to be expected and actually now is a reality.

GJ: So what is the situation now?

Al-Omeisy: Aden [a city in the south] has been declared the temporary capital of Yemen by the government that has returned from exile in Saudi Arabia. The Saudi-led coalition managed to push the Houthis and [Houthi-allied] Saleh forces out of Aden and much of the South back in August of 2015, yet the government still has no control of Aden, let alone the rest of [the] regions won from the Houthis and Saleh.

Due to the precarious situation in Aden, it has served as a cautionary tale for the rest of [the] areas that are still to be won over by the Saudi-led coalition. The coalition is pushing hard towards the original capital, Sana'a, which is a Houthi stronghold, but many are now less enthusiastic about [the] prospect of the [Saudi-backed] Yemen government taking back control of it having seen what transpired in areas allegedly governed by them now.

To give an example, there are almost daily assassinations in government-controlled Aden while very few in Houthi-controlled Sana'a. This has led many to believe that the Saudis defeating the Houthis will not be the end of their current troubles, but likely the beginning of others too...Yemen is very close to being a failed state. This is further exacerbated by the rise of multiple militias and warlords and where the escalation of the conflict..will only ensure a Syria scenario on steroids.

GJ:  What is the situation for the press now in Yemen? Mohammed Bamatraf, an editor of the Yemen News Network site:

Journalism has become a dangerous profession in Yemen. Many journalists have been kidnapped, injured and killed. Journalists are afraid to speak freely for being threatened by the groups who dominate their areas. The journalists within the Houthi-controlled areas cannot say a word against [former Yemeni president and Houthi ally] Ali Abdullah Saleh and the militias that control the capital. Otherwise they will have the ready-made accusation of cooperating with the "Saudi aggression."

On the other hand, the journalists in the southern parts of Yemen are keen not to [offend] the extremist groups... We have seen many journalists being arrested and killed for covering events.