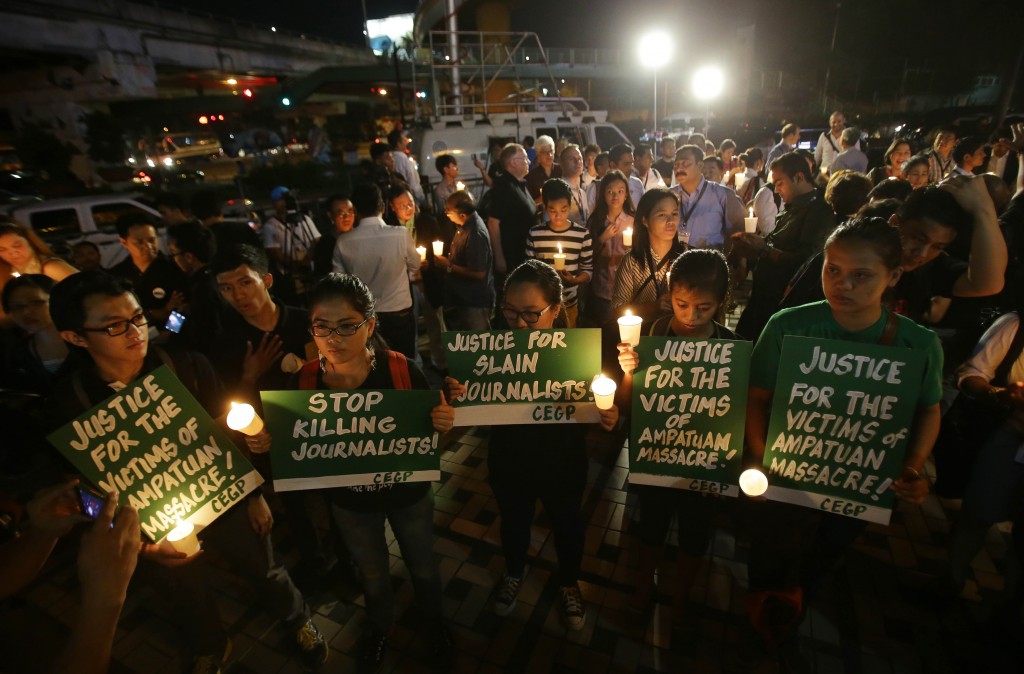 Filipinos hold slogans during a candle lighting event to mark the 5th anniversary of the massacre of 58 people, 32 of them journalists, in suburban Quezon city, north of Manila, Philippines on Sunday, Nov. 23, 2014. Five years after gunmen flagged down a convoy of cars and massacred the occupants, in Maguindanao, southern Philippine province, the body count continues to rise. The Ampatuan clan is tagged as the prime suspects in the carnage. (AP Photo/Aaron Favila)

A Filipino radio journalist has been found shot to death in his home on the southern island of Mindanao.

Elvis Banggoy Ordaniza, a 49-year-old reporter for a radio station in the town of Pitogo, 520 miles (837 km) south of Manila, was shot twice in the chest by unknown attackers while preparing dinner at his home on Feb. 16, according to the National Union of Journalists in the Philippines.

Authorities retrieved two empty shells from a .45-caliber handgun from the scene of the crime,  the Philippine Star reported.

Police have not provided any public details of a motive for the crime. However Ordaniza covered stories including the drug trade and illegal gambling in the Mindanao province of Zamboanga del Sur. Before becoming a reporter, Ordaniza was a member of the New People’s Army, the armed wing of the Communist Party of the Philippines, which has fought an insurgency against the government for five decades.

The NUJP also warned that "partisan politics" may have played a role in Ordaniza's death, as campaigning for May elections in the Philippines has recently begun.  In 2009 during a previous election season, 58 people, including 32 journalists and media workers, were killed in an ambush in the Mindanao province of Maguindanao. Of the 193 suspects named in what is now known as the Maguindanao massacre, not one has been convicted.

Since 1986, more than 170 journalists have been killed in the Philippines, according to the NUJP. Ordaniza is the 31st media worker to be killed since President Benigno Aquino took power in 2010

One of the world's most-populous democracies, the Philippines is among the most dangerous places in the world to be a reporter, ranking fourth behind Somalia, Iraq and Syria on the Committee to Protect Journalists’ 2015 Impunity Index, which measures the failure of governments to prosecute those who kill journalists.