Third Indian journalist in a year killed in Uttar Pradesh 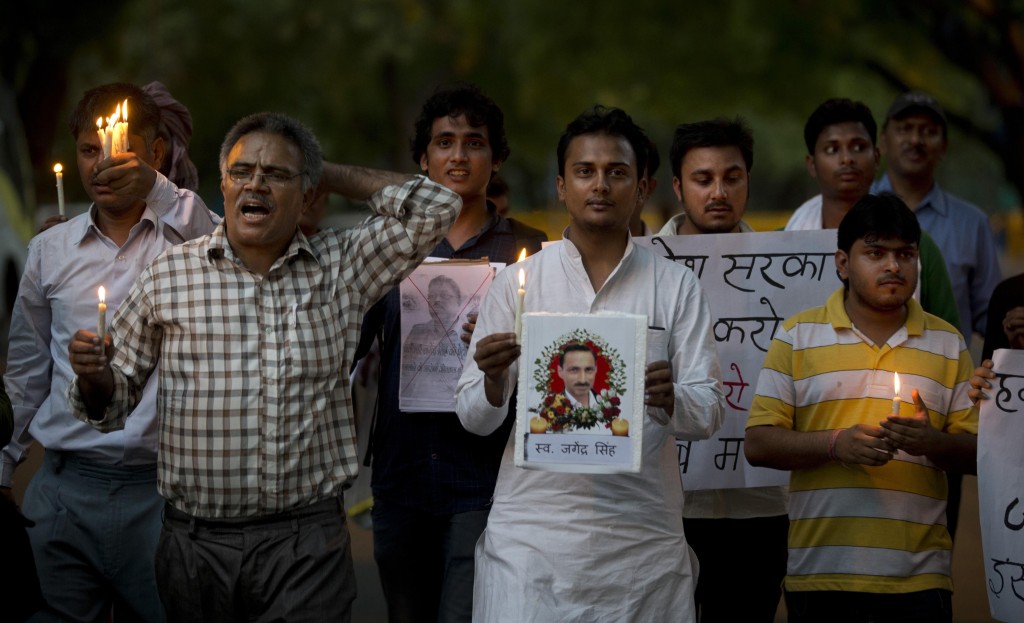 Indian journalists light candles in memory of freelance journalist, Joginder Singh in New Delhi, India Friday, June 12, 2015. Police are investigating into the death of Singh who was set on fire after he accused a state minister of being involved in illegal mining and land seizures in northern India. In a statement to a magistrate before dying Monday from burns covering 60 percent of his body Singh had implicated Uttar Pradesh state's dairy minister, Ram Murti Singh Yadav, as well as two police officers in the June 1 attack. (AP Photo/Saurabh Das)

A journalist was shot dead by three gunmen on motorcycles in the Sultanpur district in the north Indian state of Uttar Pradesh.

Karun Misra, 32, was the Ambedkarnagar bureau chief of the Hindi daily, Jan Sandesh Times. He was attacked while driving to his home in Ambedkarnagar on the afternoon of Feb. 13. Although he was taken to the hospital shortly after the shooting, he didn’t survive his injuries, according to The Hindu, an English-language national daily newspaper.

The three assailants are still at large, and the motive of the killing hasn’t been identified. In response to the killing, Uttar Pradesh Chief Minister Akhilesh Yadav urged the director-general of the state's police to form a special investigative team to probe the case, according to The New Indian Express.

India has a poor record of prosecuting those who kill journalists. Over the past decade, 11 journalists have been killed for their work in India, according to an October report from the Committee to Protect Journalists. There have been no convictions in any of the cases and nearly all of the victims covered corruption or politics, the report said.

Uttar Pradesh, India's most populous state, has been particularly violent recently. In October, television journalist Hemant Yadav was shot by two attackers in the Uttar Pradesh town of Chandauli, according to ANI news, an English-language news portal in India. It isn't clear if Yadav's death was related to his work.

In June, freelance journalist Jagendra Singh died from wounds sustained after local police allegedly doused him in gasoline and set him alight after Singh wrote about a local minister's involvement in illegal mining operations. Police have said that Singh committed suicide after they came to arrest him, according to IBNLive.

Days after Singh's death, another journalist was beaten and dragged behind a motorcycle after covering a local land dispute, though he survived.