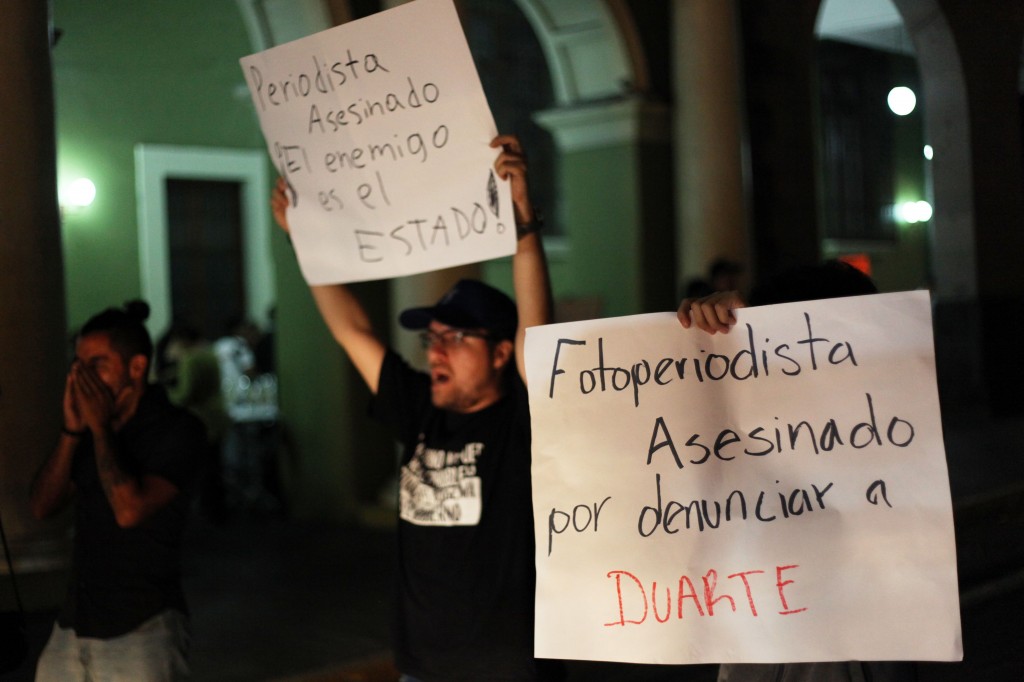 Journalists hold a late night vigil to protest against the latest murder of a fellow journalist in Veracruz, Mexico, Saturday Aug. 1, 2015. A photographer for the Mexican investigative magazine Proceso, who had fled his home state after being harassed, was among five people found slain early Saturday in an apartment in Mexico City, according to the magazine. The body of Ruben Espinosa, who collaborated with Proceso and other media, was identified by a family member at the morgue Saturday afternoon, Proceso reported, adding that he had two gunshot wounds .Sign in the front says: "Photojournalist murdered for denouncing (Veracruz state governor Javier) Duarte". (AP Photo/Felix Marquez)

A newspaper reporter in southern Mexico has been shot dead, the third journalist slain in less than a year in Mexico's southern Oaxaca state.

Marcos Hernández Bautista, 38, was shot in the head Jan. 21 as he was leaving a bar in San Andrés Huaxpaltepec, a town 94 miles (151 km) southwest of Oaxaca city, according to the Committee to Protect Journalists.

Hernández worked for the Oaxaca daily, Noticias, Oaxaca Voz e Imagen, and freelanced for two other radio stations in the state. Ismael Sanmartín Hernández, the editorial director of the newspaper told the New York-based press freedom group that Hernández's reporting had taken on "cacicazagos," or local political strongmen, and that he had often been in fear.

Hernández was also a member of a leftist party and a local cultural official in the nearby town of San Andrés Huaxpaltepec, Agence France-Presse said Jan. 24. Local prosecutors were researching a range of possible motivations for the attack.

The death comes after the killings of Filadelfo Sánchez Sarmiento, the host of a radio news program who was killed outside his station in Oaxaca state in July 2015, and Armando Saldana Morales, a Veracruz-based radio journalist who reported on organized crime and was killed in Oaxaca in May 2015.

Two journalists were shot dead in as many days in the Mexican state of Oaxaca. Although an official statement is pending, colleagues believe the journalists were killed because of their work.

Press freedom in Mexico threatened by continuing violence against journalists and the failure to effectively prosecute those responsible. As of May 2015, a special prosecutor's office was investigating 555 potential criminal cases where journalists or media outlets were victims, according to a recent report by Human Rights Watch.