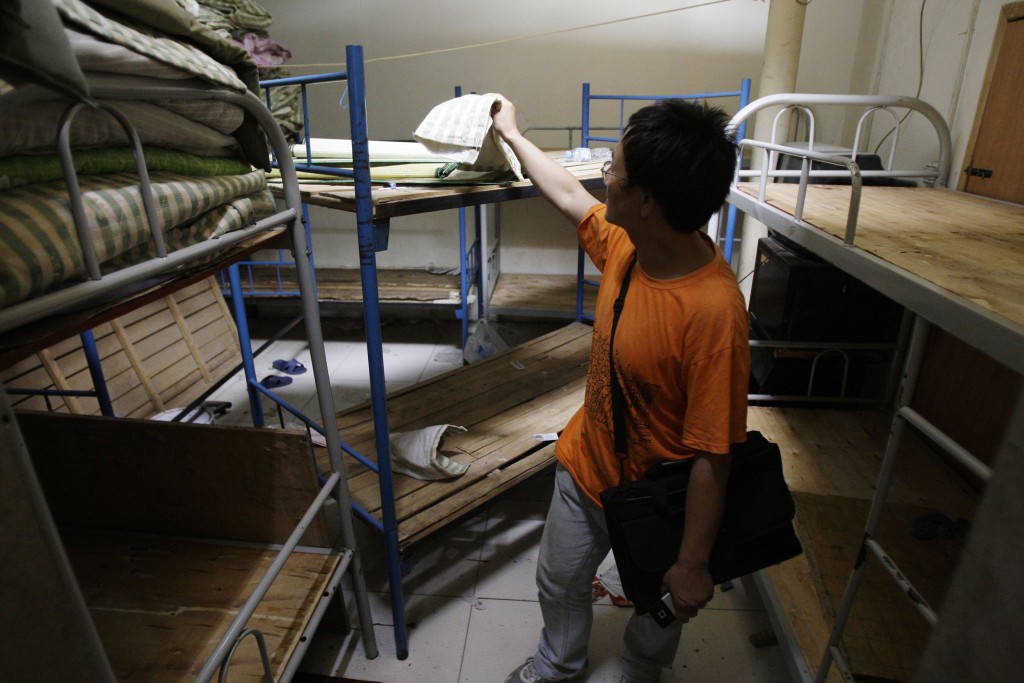 Blogger and human rights activist Liu Dejun looks through a room in a "black jail" in Beijing where people petitioning the central government from the countryside were held, Aug. 4, 2009. (AP Photo/Greg Baker, File)

One of Liu Dejun's first jobs after leaving the police academy was as a prison guard. Little did the native of China's central Hubei province know that one day he would be on the other side of the bars.

Influenced by Western radio news from networks like Japan's NHK, the Voice of America and Radio France International, he left his job in 2000 with an interest in human rights and began blogging. In 2003, he moved to the southern province of Guangdong and soon became involved in labor rights. So began a career that would lead him into a series of conflicts with the Chinese government that would land him repeatedly in prison. After suffering a terrible beating in a Guangdong prison, Dejun would move to Beijing in 2009 and eventually began writing for Boxun, an overseas Chinese news site. Even in Beijing, he was not safe, and was again arrested and tortured. During his time in China's capital, Dejun became the subject of a documentary by famed Chinese artist Ai Weiwei. Eventually, with the help of rights organizations like Frontline Defenders and Germany's PEN chapter, he left for exile in Europe. Dejun, 39, now lives in Nuremberg, Germany and blogs about human rights at www.freeinchina.org. He spoke with Global Journalist's Ilenia Caia about the challenges of writing about human rights abuses from inside China.

Global Journalist: How did you move from being a prison guard to blogging about human rights?

Dejun: I first quit my job and then I went to Beijing and I started writing. At that time, there was no blog, only MSN Space from Microsoft. Then I met a human rights lawyer on the internet and we talked about rights of migrants workers. In 2007, I went to Guangdong province, in the south of China, where many migrant workers were. I started working in a Taiwanese factory where I used to talk to the workers about their rights. After five months, the owner fired me. Then I started writing on my blog about victims whose rights were violated.

The more victims knew me, the more called me asking for help. While I still was in the Guangdong province, I founded an NGO that helped workers to defend themselves and to go to the court, but the government didn’t like it. They closed our offices and arrested me.

GJ: What happened after your arrest? Dejun: The government tortured me. They knocked me on the neck. I couldn’t move. When I went to the toilet, I couldn’t move my legs. They were broken. They hit me with iron sticks. This was between 2008 and 2009. I spent New Year's in prison in Guangdong. Then in April 2009 I went to Beijing to a meeting about human rights and I met people at the meeting that told me to stay in Beijing because there were more resources that could help with my NGO, so I stayed.

Dejun: In Beijing there were many petitioners [people seeking to appeal local government decisions to the central government]. I was shocked; they were treated like animals, they slept underground, they didn’t have food, they searched for food in the rubbish. I wrote cases on them, but at that time, I didn’t work for any media or for any institution. Then one friend suggested that I should contact Boxun, so I wrote to the director. After he read what I wrote, he said, “Yes you can work for us, I’ll give you a salary, that is not too much but is enough to live in China and work for human rights.”

GJ: How did the government respond? Were you threatened?

Dejun: I wrote more and more about human rights and helped many people. The police hated me. They took any chance to catch me, arrest me, any chance for revenge because I was a troublemaker. After the documentary that the famous Chinese artist Ai Weiwei made on me in 2010, I was arrested again and tortured in Beijing in 2011 during the Jasmine Revolution [an aborted online effort in China calling for a Tunisia-style popular revolution]. They threatened me, saying that they would have killed me, I think because they were very scared by me. The Chinese Communist Party said that they were going to kill us [dissidents, activists] after the revolution, that we would not see the sunshine again.

GJ: After you were released, how did you get out of China?

Dejun: My friend...helped me contact some institutions and some activists but he got arrested after one week so I had to contact other organizations by myself. A woman from Reporters Without Borders helped me and recommended me to PEN and I came to Nuremberg.

Living in Germany is too hard. I am alone here. People in Germany are very busy and they are not too open like Italians or Spaniards. But now I am getting accustomed.

GJ: Do you have plans to return to China?

Dejun: I think that is now impossible. When I left China, I got help from the Frontline Defenders. A friend of mine just got six years in prison in China. He said to me, “You can’t come back otherwise you will be arrested again and this time you will not escape.”

The Chinese government is arresting many, many people, giving very long sentences in prison. Some of them will die in prison; some of them will be tortured. It’s very bad. My friends, they were very active but now almost all of them are in prison.