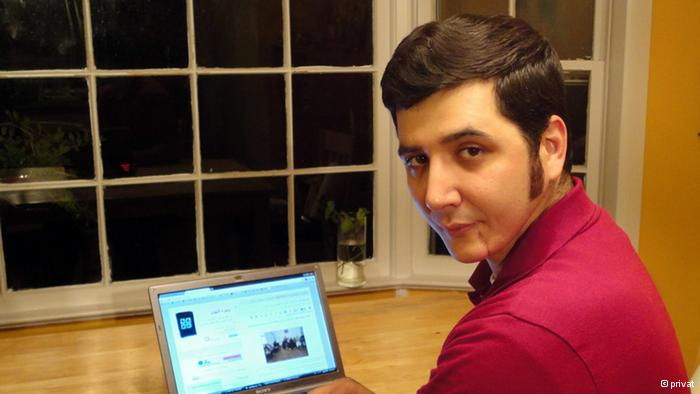 "I lost my brother, I got cancer in jail. Even after that, I was thinking...I can become chief editor of my newspaper again."

Arash Sigarchi is nothing if not a survivor.

Born just months before Iran’s 1979 Islamic revolution into a family of traditional musicians, Sigarchi reached adulthood in the late 1990s just as the Islamic Republic began unshackling the media in the early years of reformist President Mohammad Khatami. He moved to Tehran, where the press was becoming increasingly lively and critical of the Islamist government. But Khatami’s reforms came to a screeching halt in 2000 as the country’s hard-liners in the country’s Islamist judiciary ordered the closure of dozens of reformist newspapers. Sigarchi returned to Rasht, where at 23 he was made editor of the newspaper Gilan Today. He expanded the paper's news coverage and tried to end the practice of reporters taking gifts or even money from local companies and government institutions in return for favorable coverage.

The changes he brought about attracted the attention of Iran's intelligence service, which began pressuring him to censor the news–even to avoid covering events like a major fire. Sigarchi complied, but in 2002 he began posting news barred from the newspaper– like stories about government efforts to jam satellite television–in a blog online. Soon, he also began working with international news outlets including Radio France International and the U.S.-backed Farsi network Radio Farda.

Sigarchi was living dangerously, and in 2004 Iran's intelligence service sought to stop him. As he told the Iran Human Rights Documentation Center, on Aug. 26 of that year he posted an article to his blog about a 1988 massacre of political prisoners by the government. The next day Radio Farda made an error and aired an interview with Sigarchi using his real name instead of a pseudonym. Sigarchi was soon summoned to an intelligence prison for interrogation, the start of a three and a half year ordeal in which he would be in and out of prison on charges of propaganda against the regime, insulting Iran's supreme leader and 'publishing lies.'

In prison, he would be hung from a ceiling fan, have his toenails pulled out and for a time, kept in a room so small he could not lie down or sleep. During that time, he was also diagnosed with tongue cancer and eventually allowed to flee to the U.S. Now a reporter in Washington, D.C. for Voice of America's Persian service, he spoke with Global Journalist's Erjun Peng about surviving as a journalist in Iran. Below, a transcript edited for clarity. Global Journalist: What was the atmosphere for journalists when you started your career?

Sigarchi: In 1996, Iran had a new president. His name was Mohammad Khatami. He was a reformist and his government tried to change several things in the country. For example, they tried to give the press a little more freedom. Even with conservative resistance, they were able to change a little. Many newspapers started to work.

There was a good atmosphere for [the] younger generation to join as a journalist in these [reformist] media. I was one of them, one of the thousands of young Iranians who had [the] desire to join. When I was 19, I was in Tehran and worked as a reporter there.  I felt that there were obstacles in front of me, but they weren't big. In 2000, [the government] shut down a lot of newspapers, so I returned to my hometown...to start my career again.

I started to understand there were some lines. I [had] never touched them before because when I was in Tehran, my editor, my chief editor, other people had to deal with that. When I started my career as a chief editor of a newspaper [in Rasht], I was facing it.

GJ: What lines could you not touch?

Sigarchi: Twenty years ago, our Supreme Leader Ali Khamenei had a representative in every single province...If you were working in a local newspaper, you could not touch anything in Iran [related to] the representatives and the supreme leader. Also, every province or city had a commander of the judiciary and the Iranian Revolutionary Guard. You could not touch them. If you talked about them, if you wrote about them, you would face a charge very soon.

When I was younger, we had a very active [paramilitary] group. They were conservatives, they were close to Mr. Khamenei. They felt that they had the right to attack all newspaper offices. Even when we were working as reporters, they insulted us, they attacked us and beat us. So there were a lot of lines for journalists.

GJ: When did you start to feel the censorship?

Sigarchi: The first time, I was covering a student protest in my city [Rasht].  I got a call from the office of intelligence services, and they told me: "You shouldn't have published that news."

I said: "Why?" And they said: "National security."

I said it was not national security, it was just hundreds of students gathered. It was my first argument [with them]. After that, every month, once a month, they called me into the office. They tried to talk to me face to face and let me know where the lines were.

GJ: How did you try to avoid censorship?

Sigarchi: In 2001, censorship got worse. Every week we had a call: "You shouldn't publish that news."

I was thinking about running a blog. At that time, it was very new. I started my blog to store my articles when they got censored. News I was not allowed to publish in my newspaper, I published on my blog. I kept at it for almost a year. I kept doing it until one day they filtered by blog. I was not able to reach my blog, log-in or put out my articles. I used an anti-filter [program] to reach my blog, but most of my audience inside Iran was gone because they didn't have an anti-filter tool. GJ: How were you prosecuted?

Sigarchi: They arrested me in January 2004. For two months, I was under torture and pressure. Then...they sentenced me for 14 years. Ten years for interviewing with radio [networks] in Europe. They said the budget of these media outlets was from the U.S., [so] I was spying for the U.S. Two years were for insulting Iran's supreme leader. One year was for propaganda against the Islamic Republic and one year was for national security [violations].

GJ: What happened while you were in jail?

When they sentenced me, the news got attention in the outside world. When I was in jail in 2004, human rights activists ran a campaign. My lawyer was Shirin Ebadi, an Iranian Nobel Peace Prize winner. She and her colleagues helped me. After almost eight months, [an appeals court] decreased my sentence to three years.

I was lucky at that time.

But if you look at the entire process, I wasn't lucky. I was a free man but they put me in jail. After two years in jail, I lost my brother. He had a car accident and died. After that I got [tongue] cancer. GJ: When did you think about leaving Iran?

Sigarchi: I lost my brother, I got cancer in jail. Even after that, I was thinking that after my sentence I can come out and I can become chief editor of my newspaper again. I can do my job better.

After that, I decided to leave the country, and my best option was the United States. When I was at the airport, they asked me: "Why are you leaving the country?" I told them because I had cancer and wanted to continue my treatment in the U.S.

But I came by myself, for a speech in Washington, D.C. When I saw the reaction inside Iran about my speech, I decided to stay here. One of the conservative [outlets] under Iran's supreme leader wrote an article and said: "We have already told you he was spying for the United States and right now he is in the United States." I got a lawyer and applied for political asylum.