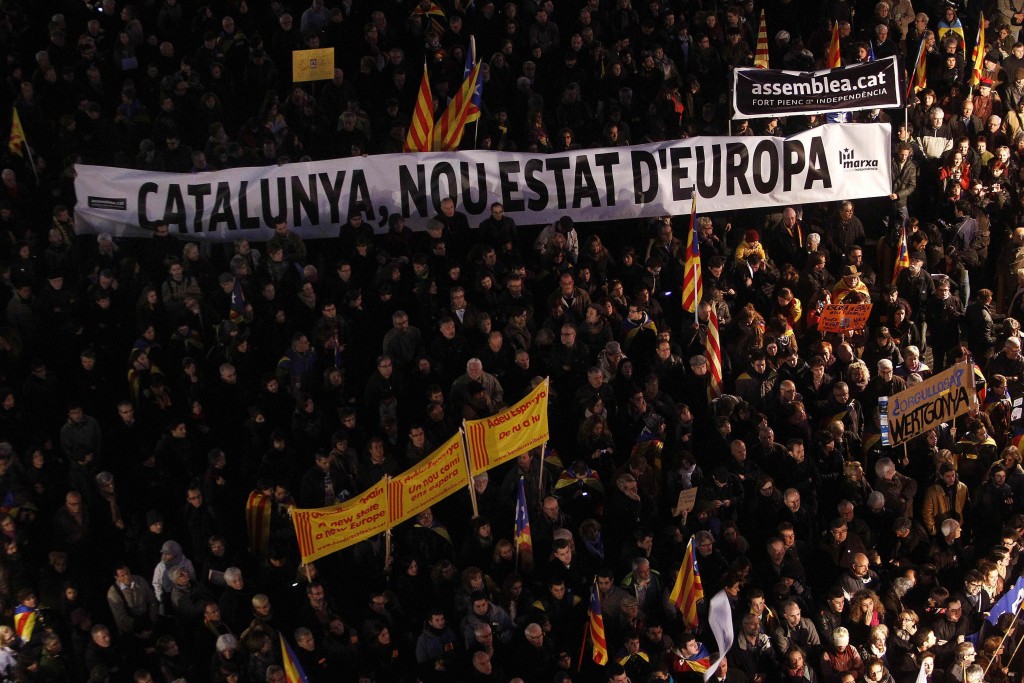 Thousands of people take to the streets in a demonstration held at Saint James Square in Barcelona on Dec. 10, 2012 to defend the teaching of the Catalan language. (EPA/Marta Perez)

Lower status for Catalan irks many in northeastern Spanish region.

Barcelona may be Spain's top tourist destination, but foreign visitors wandering through its famed La Sagrada Familia Church or Picasso Museum may be surprised to hear that many of the locals around them are speaking not Spanish but Catalan.

That, of course, is because Barcelona is the capital of the Catalonia region – an area whose regional parliament voted in November to begin a process to secede from Spain by 2017. Catalans have multiple reasons for wanting to split from Spain – not least because the relatively wealthy region pays more in taxes to Madrid than it gets in government spending.  But the Spanish region's success in keeping alive its local language–even as other minority languages like Welsh, Basque and Norman have declined in Europe – has helped Catalans preserve a shared identity among its 7.5 million people. Contrary to popular perception Catalan is not a dialect of Spanish but is a distinct Romance language like French or Italian. Miquel Strubell ran the Catalan government's language promotion office and research departments from 1980 to 1999. Before retiring last year, he also worked as executive secretary of a partnership between the Catalonia government and a local university to promote multilingualism.

He spoke with Global Journalist's Zhou Hang about how language has shaped the Catalan identity, the challenges Catalans have in using the language in a country of 47 million, and the growth of support in Catalonia for independence.

GJ: What is unique about the Catalan language?

Strubell: Catalonia has a language, which has been spoken in the country and been regarded as the country’s own language, like Czech in Czech Republic, Polish in Poland, or Norwegian in Norway, for nearly a thousand years.

In the last three centuries at least, there’s been almost constant pressure on the Catalan language, on Catalan speakers, to abandon it and to adopt Spanish. It’s almost unique in Europe. Catalans are an exception in having managed to save the language and put it into democratic policies to encourage speakers to use the language, to learn it, to improve it, and for products to be available in the language. GJ: What limits are there on the use of Catalan in Spain?

Strubell: If you write or talk about the country we are in now, you will find that you cannot use the Catalan language in the Spanish parliament, in the Spanish Supreme Court or the Constitutional Court. In the whole range of central government bodies, you cannot use the language at all. So, anything that goes there has to be translated. That gives prestige to Spanish, of course, and puts Catalan in a secondary role. If all these bodies were based in Barcelona because our country [was] Catalonia, this constant pressure [would] disappear overnight.

GJ: Beyond language, what are the other reasons that Catalonia wants independence?

GJ: There is a Spanish general election Dec. 20 and Prime Minister Mariano Rajoy's People's Party and most of the major opposition parties have agreed to oppose Catalan independence. How do people in Catalonia view the vote?

Strubell: I've never been less interested in a Spanish general election than I am this time. I'm one of the many, many people in Catalonia who have really [been] turned off. We don't expect anything to come of an election result in Madrid. So I will go to vote anyway, but with no enthusiasm at all.

GJ: What do you expect for the future?

Strubell: If I lived in the south of Spain, I would only get information about Catalonia through the local media or the media coming from Madrid. [That] image that has been portrayed about Catalonia and Catalan politics is false. I'm hopeful that we can stick it out. I'm also hopeful that the current trend in the international media, which is [helping] to get people here to see what's going on...will continue.

I don't have any formal role within the independence movement, but I'm spending a lot of time lecturing, donating money and writing articles. Thousands of people like me are doing the same. So, we just want to get back to our everyday lives as soon as independence is proclaimed and we can build a new country.