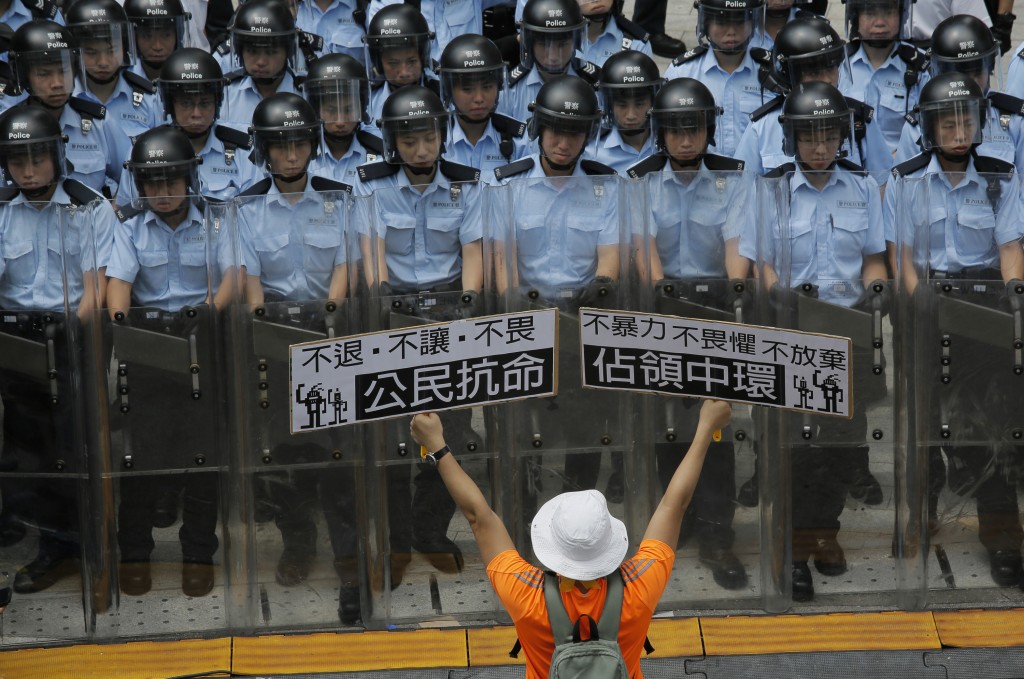 The end of protests hasn't ended discontent with Beijing.

[Updated to include Richardson, Dec. 7]

A year ago the Occupy Central movement ended in Hong Kong with protesters failing to either force the resignation of the territory's chief executive C.Y. Leung or persuade China's Communist Party to allow citizens' to nominate their own candidates for the top post in future elections. Yet the effects of the Umbrella Revolution still linger.

On the anniversary of the end of the mass protests, Global Journalist spoke with three people who kept close tabs on the protest for their perspective on how things have changed. Joshua Wong, 19, is a student activist who founded the pro-democracy Scholarist movement that helped spearhead the demonstrations. He's still facing repercussions for his actions: in February he's scheduled to be tried on charges that include inciting an illegal protest. Recently, he took a break from exams at the Open University of Hong Kong to speak with Global Journalist.

Global Journalist:  Pro-Communist people on the mainland accused you of being a puppet of the U.S. and U.K., yet you have remained quite critical of the British Prime Minister David Cameron and of President Obama. Tell us why?

Joshua Wong: It’s really ironic that the pro-Beijing newspapers in Hong Kong ... claim that Joshua Wong is [a] CIA agent that has received U.S. military training. It is ridiculous and wrong.  Why Hong Kong now is different than mainland China is all because of the joint declaration signed by China and the U.K. government in 1984 to ensure Hong Kong [would] adopt rule of law and [an] approximation of freedom and democracy. So we observe that the Communist Party of China has broke their promise in that joint declaration...the U.K. government had a responsibility to voice out and criticize the ignorance of the Communist Party towards the joint declaration.

GJ: One really interesting aspect of the protest last year was how young people were in the vanguard demanding change, providing a lot of leadership, what’s the mood on campus right now where you are?

Wong: Compared to...the momentum last year, actually last year we got the best momentum of the new generation. I mean, the students have raised the political awareness. Of course we can't get any positive result from the Umbrella Movement. But after the movement now many students join to different activist groups and organize campaigns to continue to fight for freedom, democracy, human rights... We’re still persisting on our road until we get what we want to decide our future.

GJ: Looking back now on events, what would you say the biggest challenge for protesters was?

Wong: ...We mobilized more than 200,000 people who occupied [the streets], and nearly a million Hong Kongers joined the movement. But the fact is  our bargaining power is still not enough for us to get what we want. So I would like to add that the fight for democracy against the Communist Party of China is really a long-term battle for us. Even we can't win in last year’s battle but I still think that in the future we can win the war.

GJ: Where do you see Hong Kong five years from now? Obviously you’d like to be in politics then.

Wong: Of course...but I can’t imagine that I will stand in the front line. That is out of my expectation. But I still think I will commit on the movement because I’m a Hong Konger, I’ve been born in Hong Kong, I live in Hong Kong and I love Hong Kong. That’s why it's really a hard time for me. Facing unreasonable political prosecution or actually there's still a lot of suppress[ion] by the Communist Party in Hong Kong...I’m still ready and able to continue to commit on the democracy movement.

Stephan Ortmann is an assistant professor of political economy at the City University of Hong Kong. A political economist, he researches Hong Kong and Singapore and their relations with China. GJ: How has the role of the media changed in Hong Kong over the last 5 to 10 years?

Stephen Ortmann: The media freedom has declined in recent years dramatically... This is a challenge that's indirect, it’s not directly through a censorship mechanism. But there are changes in the editors, firing critical journalists and pundits, and in the ownership of prominent media organizations. Right now the South China Morning Post, the most prominent English language paper here, is changing its ownership to.[Mainland Chinese businessman] Jack Ma. The reporting it's definitely moving towards a more pro-Chinese perspective, and this has been consistently going on over the last decade.

GJ: One of the compelling things about the protest last year was that so many of the protesters were younger. It seems there was a significant divide generationally as to how people viewed democracy and reform in Hong Kong. How was that played out over the past year? Does that dynamic still exist or has that changed?

Ortmann: That pretty much still exists. I have students and talk them and many of them cannot talk about this with their parents who have a completely different opinion. So, they just generally don’t talk about politics at home. They are a new and younger generation that wants to fight, want to make a change for Hong Kong. But the older generation thinks that they still have a good life, they shouldn’t rock the boat, they shouldn’t do anything that worries or that could lead to any kind of problem.

GJ: Do you see there has been any sort of effect or impact of the Umbrella Revolution  on the politics of mainland China?

Ortmann: No, not directly at least...in fact most of the people in mainland China were opposed to the movement. What they got from their media, which was quite biased, usually didn’t show much of the protest but only chaos. That kind of fear that it could spread was unsubstantiated. And what I hear from Hong Kongers going to the mainland is they have to defend what was going on because of that, this difference of opinion that has occurred. Sophie Richardson is the China director at Human Rights Watch. She writes about reform in China and human rights issues in China and southeast Asia.

GJ: What's the difference in the role the Chinese government's stance towards Hong Kong before and after the movement?

Richardson: I think very few observers either in Beijing or at senior levels of the Hong Kong government or even among international observers who paid a lot of attention to Hong Kong saw the movement coming...I don't think many people saw the months-long protests – very organized, very peaceful, quite sustained – coming at all.

And I think the lesson Beijing has taken away is that [it has to be] much more vigilant of any sort of organized opposition. So in the past year we've seen the ongoing scrutiny on, for example, some of the protest's leaders, growing scrutiny of who is crossing the border, more concern about even local Hong Kong religious leaders whose services are attracting [those] from the mainland. I think Beijing's reaction has been to surveil that much more what's going on in Hong Kong.

GJ: Some hold that the Umbrella Revolution is a failure since no political reforms have been achieved. What do you think?

Richardson: I think seeing that number of people protest peacefully in a way that is absolutely guaranteed to them by international law...it's a tremendous success.

GJ: The anniversary of the start of the movement attracted many fewer demonstrators than last year. Have the protests lost momentum?

Richardson: I would address this in a different way. As long as these fundamental issues haven't been addressed in a way that a significant number of people in Hong Kong find acceptable, that tension isn't going to go away. I don't know if it's necessarily helpful to try to predict whether there will be more massive protests...but I think many of the realities that prompted the protest in the first place are still there.