A look back at Hong Kong's Occupy Central [photo essay] 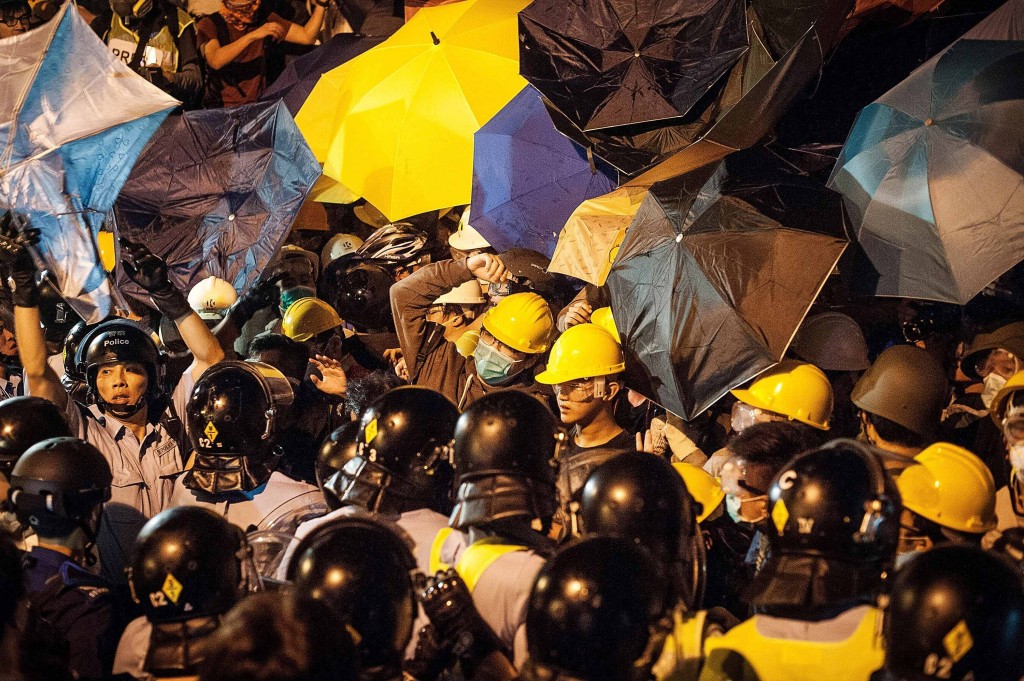 Pro-democracy protesters clash with police outside Hong Kong's Government complex on November 30, 2014 in Hong Kong. Leaders from the Federation of Students called on fellow protesters to attend a rally and come prepared for escalated action. Protesters were asked to bring masks, umbrellas and helmets in a bid to move the protests forward after police successfully cleared the Mong Kok protest site earlier this week. (Anthony Kwan)

For two and a half months last year, the massive pro-democracy protests in Hong Kong captured the world's attention.

Born and raised in Hong Kong, photographer Anthony Kwan moved to the U.S. in 2003. He studied engineering at the University of Minnesota but work with the campus newspaper drew him into photography.

In 2014, Kwan was back in his native city and photographed the 79-day protests. His pictures — some of which are shown below — have appeared in outlets including the Minnesota Daily, American Public Media, the Associated Press and Minnesota Public Radio. Pro-democracy protesters take part in a rally outside of Hong Kong Government Complex on October 13, 2014 in Hong Kong.

Occupy Central was one of the most important events in recent Hong Kong history, Kwan said in an interview with Global Journalist's Loretta Lee. “It’s part of history, and I am happy to be there, happy to witness that." Riot police use tear gas during a clash with protesters at Mongkok district on November 25, 2014 in Hong Kong.

"There were a couple moments where police are taking their guns out," Kwan said. "They are just storming out from the police station. And you would think ‘what’s going on? It’s not life-threatening, but there was a moment where I was scared a little bit ... you need to be there at the position, where we call it a ‘good spot,’ where you get the pictures. But at the same time, those spots were the worst spots to be in." A pro-democracy protester sleeps on the floor outside the Legislative Council building entrance after clashes with police on November 19, 2014 in Hong Kong.

"In the beginning, it was really tense," Kwan said, of the atmosphere at the protests. "But towards the middle, everyone was really calm, really chilled. Everyone was just [sitting] there."

Kwan travels frequently in Asia on assignment. Earlier this year, he was was detained in Thailand for carrying a bulletproof jacket and helmet, while covering the aftermath of a bombing at a Hindu shrine.