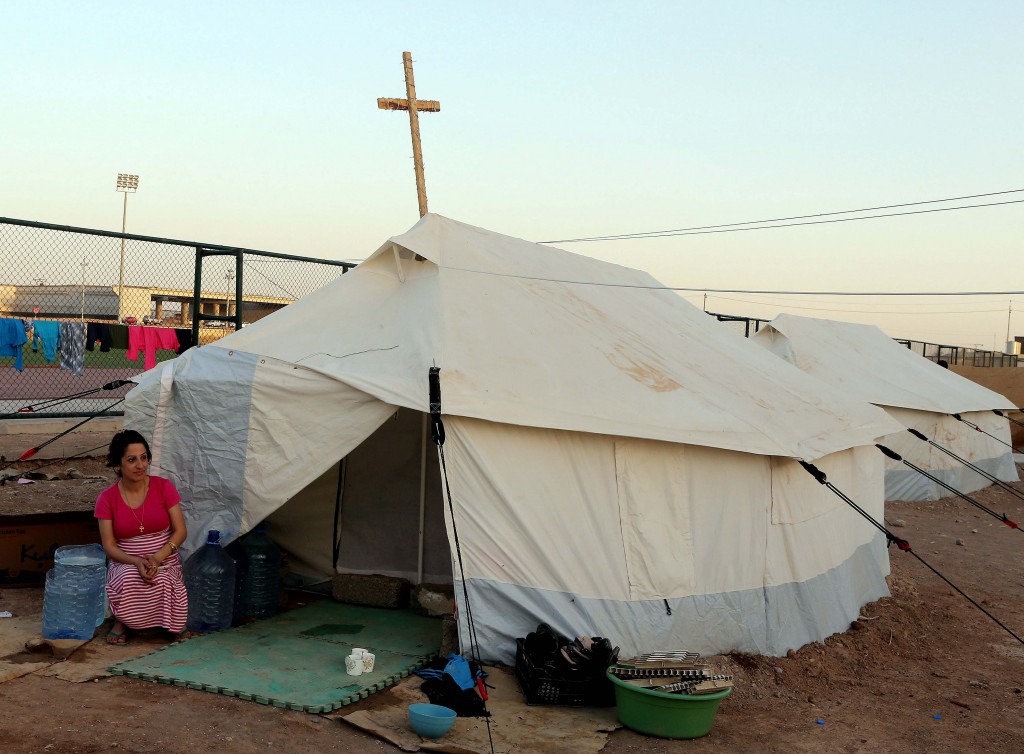 If Aida had known the severity of the storm that was about to come down on Qaraqosh, she would have fled her home at the same time that most other Christians in the northern Iraqi city left. Qaraqosh, a settlement of about 50,000 that lies 20 miles east of Mosul in the province of Nineveh, has long been considered the capital of Iraq's Christian minority.

But in August of last year, the Kurdish militia defending the town from the Islamic State withdrew. Tens of thousands of Iraqi Christians and other minority civilians evacuated, many of them in a desperate flight east towards Erbil, the capital of Iraq's Kurdish region. But Aida and her family stayed behind, hoping the situation might improve.

Yet after ISIL fighters occupied the city, they were soon threatened with execution if they did not convert to Islam. After two weeks, her family was given the chance to leave. But as Aida was readying to depart Qaraqosh on a minibus, her three-year-old daughter Cristina was taken from her arms by a fighter from the Islamic State. When Aida refused to depart without her daughter, they threatened to kill her and her husband. Stories like Aida’s were what inspired Spanish filmmaker Alfredo Panadero to make the documentary “Guardians of Faith” with five colleagues. The group spent three weeks in Iraq's Kurdish region interviewing Christian families forced from their homes. Panadero spoke with Global Journalist’s Nicole Osuna about the making of the documentary.

Global Journalist: Why did you choose Iraq as the setting for the documentary?

Alfredo Panadero: We were very influenced by the testimony of Douglas Bazi, who is an Iraqi priest from Baghdad. He endured a kidnapping in 2006, in which he was tortured for nine days by a Shiite terrorist group. For five of those days he didn’t have anything to eat or drink … Iraq is a place where in the past year, Christians had to flee out of Mosul and other cities due to the spread of the Islamic State.The idea was to go where things were happening; we felt that there were many stories that had to be told.

GJ: Did you feel threatened at some point when you were filming?

Panadero: We were told to be very careful in terms of the places we were going and the people we were talking with, how much time we could spend on the streets. We were careful. But no, we went to two war fronts and there wasn’t an issue. We also went to an area outside the Kurdistan region that’s called  Kirkuk. It is a city where there are current cells of the Islamic State.

GJ: What effect do you think the Islamic State has had on the region you were in?

Panadero: First of all, I would like to say that as the days pass, I see less reasons to keep calling the group “ISIS” (Islamic State of Iraq and Syria). The group does not want to stay in Iraq and Syria, they are actually aiming for Europe and they have already started to attack Europe. They are truly aiming to affect Western society in general.

Daesh [an Arabic acronym for the Islamic State] has changed the lives of these people because they have been forced to flee to avoid having to renounce their Christian faith, which is an example of courage, profound coherence and faith. Many of these Christians continue trusting God and maintaining their faith. Nevertheless, it is true we met people who were in a very difficult physical and psychological state that have lost all hope and that want to leave their country.

GJ: Do you think the stories you heard correspond with what's been reported in international media outlets?

Panadero: To tell you the truth yes and no.

On June 10, 2014, [Spanish newspaper] El Mundo published that Muslims in the city of Mosul had opened the doors for the Islamic State - which is true - but what they failed to mention was that they also sold out the Christians living in the area. They went to Christian homes to threaten them by saying that if they didn’t leave they [the Christians] would be killed by Daesh or them [the Muslims]. I think that the issue is not sufficiently reported by international media outlets and what is reported is very superficial and doesn’t do justice to the current situation.

Guardianes de la Fe [Guardians of Faith] is expected to be released in early 2016.