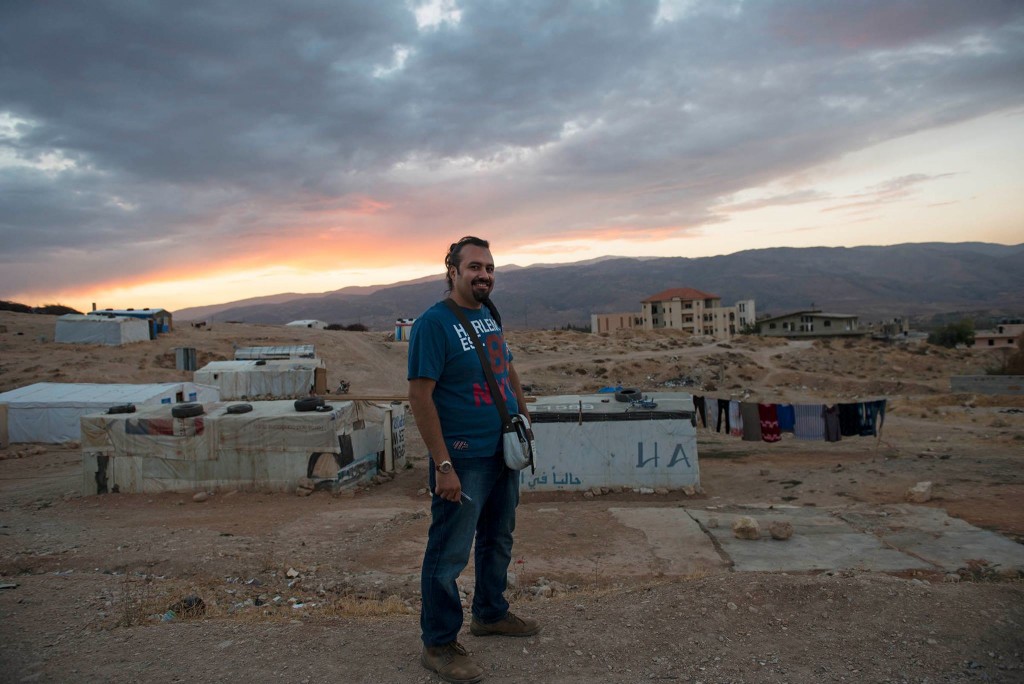 "If you have your camera hanging on your neck, or in your bag, it's like carrying a gun."

When the Arab Spring erupted in Syria in July 2011, Syrians, like other people across the Middle East at the time, picked up their phones, cameras and pens and began documenting what was happening. Among them was Mohammad Ghannam, an engineer who had worked for Volkswagen and Audi and as an administrator for the United Nations High Commissioner for Refugees in Syria. Ghannam, who grew up as a Palestinian refugee in Syria, never thought he might end up working as a journalist for the New York Times.

"I wasn't a journalist before the revolution," he says. "I didn't study journalism. I was a mechanical engineer, living a completely different life."

Using pseudonyms, Ghannam and his friends launched a Facebook group named Syria Today, aiming to share among activists firsthand information on events in Damascus and elsewhere in the country. Ghannam meanwhile took part in peaceful protests and started delivering humanitarian aid to areas under siege, while communicating frequently on the unfolding violence with Liz Sly, a Washington Post reporter based in Beirut.

Soon Ghannam became a target of the Assad administration. Security forces went to his parents' house looking for him, then they raided his home in Damascus. Later, on his way to Idlib in northwest Syria, he was stopped at a checkpoint, pulled from his car and jailed on charges that included "taking photographs of scenes of destruction and blaming the government for the violence."

For a year, he was held Homs' central prison and tortured. When he was released, Ghannam fled to Lebanon, where he met the New York Times' Anne Barnard. Thanks to his network in Syria and his command of English and Arabic, he began reporting for the newspaper. However as a Palestinian Ghannam was denied a visa to stay in Lebanon and was forced to seek political asylum in France. Ghannam now works as a communications officer for Médecins Sans Frontières in Paris. He recently spoke with Global Journalist's Shih-Wei Chou the radical changes in his life over the last five years.

Global Journalist: What was freedom of expression like in Syria before the current civil war?

Ghannam: In Syria in general, there is no freedom of expression. It's similar to North Korea. Since I was born, I knew one thing. My father, my uncle and my aunt told me that I couldn't talk about politics. I can talk about God, religion, but I couldn't mess with the president or the police. Don't talk about it, let alone criticize.

GJ: You were an engineer. What led you into journalism after war broke out in Syria?

Ghannam: I was doing this Facebook group [Syria Today], I remembered one of my friends in Damascus asked who can speak English. I said I could. There was a journalist at the Washington Post named Liz Sly – I started speaking to her via Skype to give her updates about what was happening in the country, and about the food and medical shortages in besieged areas.

I wouldn't have counted myself as a journalist at that time. I was an activist making frequent trips to Homs [in central Syria], where several parts of the city had fallen out of regime control.

After the intelligence agency went to my parent's house looking to arrest me, I left Damascus for Homs. I stayed there, in an area controlled by the opposition. My friend, a photographer, introduced me to AP and Reuters. Then I started filing pictures for publication. GJ: What was the atmosphere for journalists after the revolt against Assad started in 2011?

Ghannam: When Syrian[s] started working in media, most of us did so secretly, using pseudonyms and highly secure connections. No one worked publicly, except those working for state news channels and papers, all of which were propaganda for the regime.

Many Syrians were working for the BBC, CNBC, and other international outlets, all in secret of course. Later in the conflict some areas fell out of regime control, so it became possible for journalists in those parts to start working in the open. But most of the time, journalists work secretly.

GJ: How has that changed?

Ghannam: It is way worse. Now no one can take their camera out on the street, unless they have permission from the government. If you have your camera hanging on your neck, or in your bag, it's like carrying a gun. The government will ask for [a] permit, and if you don't have one, you go to prison. And they keep beating you, torturing you to make you confess that you are 'in contact with the enemy' – in other words, the foreign media – even if your only crime was taking pictures.

GJ: What incident led you to go into exile?

Ghannam: One day I went to [the northwestern city of] Idlib with a friend to film a documentary. We were stopped at a checkpoint by the government forces. There were five guys. One of them searched the car. I still remember him saying: “I found the camera.”

He was terrified, as though he had found a missile. I got arrested, charged with communicating with foreign media without permission, taking pictures, laying accusations against the Syrian army of destroying the country and bringing food and milk to besieged areas — which the government considered “terrorist” areas. And they said I was humiliating the president.

I was tortured for three months straight. During that time, they hung me up by my hands, and splashed burning hot water on my body. They made holes in my legs with a heated metal stick. I was in prison for more than a year.

Days after my release, I fled to Lebanon where I met the bureau chief of The New York Times in Beirut by chance. Her name is Anne Barnard. She needed someone to help with the news, someone from Syria who could speak Arabic and who had a network.

I started reporting for the New York Times and things were going great until the Lebanese state canceled my residency and threatened to fine me $5,000 for practicing journalism without permission — especially because I am Palestinian. Palestinians in Lebanon are barred from many professions. And without a job, I can’t have a residence permit. Facing imminent arrest, I had to leave the country immediately — I had no choice. A friend arranged a meeting with officials at the French embassy in Beirut. Three or four months later, I got my visa.

GJ: What did you learn about the Assad government's surveillance of journalists?

Ghannam: Censorship changed my life forever — it led to my arrest and imprisonment. Can you imagine that the government had a thick stack of paper and the interrogator told me it was my phone records? The documents were handwritten. I told the interrogator that I wasn’t Osama Bin Laden, that I didn’t need to have someone sitting full time, transcribing my calls. I am not a public figure, but I think they do that to anyone they suspect.

GJ: What has happened to your family?